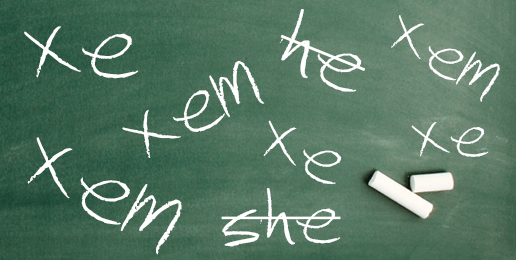 The National Post in Canada is reporting on a recent controversial school board decision in Vancouver to accommodate the desires of gender-confused students and their parents. This accommodation includes allowing students to use the “‘sex-neutral third-person'” pronouns of “xe, xem, and xyr” in place of “‘he/she’ or ‘him/her.'” According to the National Post, “These are…terms used to repair the failure of the English language to allow for 21st Century gender sensitivities….Students will be enabled to choose their preferred washroom, or ‘a reasonable alternative washroom’ if they desire ‘increased privacy.’ In such cases the alternative arrangement ‘will be provided in a way that protects the students’ ability to keep their trans status confidential.'”

A few thoughts on the new rules imposed by sexuality revolutionaries:

1.) Pronouns denote objective biological sex—not subjective feelings or desires. That is a linguistic fact. The school board in Vancouver is  adopting completely new terminology. New words—neologisms—enter the lexicon not infrequently. We see this with terms emerging especially in the science and technology fields where new discoveries and inventions require it.

But this is something different. The school board is adopting language created by the radical Left to embody their radical Leftist notions which they seek to compel all of society to accept. Parents, taxpayers, administrators, and teachers should be up in arms about this political move couched in foolish social science and pseudo-compassion.

2.) Other schools, including here in the United States, are compelling teachers to lie, that is to say, to use pronouns that do not correspond to the biological sex of students. In other words, teachers are being compelled by their administrators to refer to gender-confused boys as “she” and “her” and to gender-confused girls as “he” and “him.” This means that the government is compelling teachers (and perhaps soon students) to lie.

There are only two justifications—or rationalizations—for this requirement: Either administrators argue that teachers must lie because it makes gender-confused students “feel better,” in which case we see again the toxic fruit of the elevation of subjective feelings over virtually every other phenomenon, including objective reality.

Or, administrators are arguing that it’s not a lie because pronouns no longer denote objective sex but subjective desires about sex in which case we’re in the beginning stages of a radical linguistic revolution driven by sexual anarchists.

3.) Conventionally, students whose disorders—mental or physical—are so serious that they are incapable of functioning in a normal school setting are sent to special schools designed to accommodate serious disorders. I would guess that gender-confused students are capable of functioning within the school setting but don’t want to. They and their parents believe that everyone else should pretend that their disorder is not a disorder and change their behavior in accordance with Leftist assumptions. If, however, they truly can’t function in a normal school setting, they should attend special schools.

5.) A few word about teachers: Teachers, particularly if they’re Christian, must refuse to lie even if such refusal is costly. In discussions about the need for public engagement in schools, particularly on the part of Christians, teachers are rarely discussed. We talk about the responsibilities of parents and other taxpayers but rarely teachers. They are not off the hook. I worked in a public high school before coming to the Illinois Family Institute in the fall of 2008. I can testify to the cowardice of even tenured Christian teachers who believed as I did but refused to come alongside me as I tried to effect some curricular and professional development changes.

As followers of Christ, the totality of our lives should reflect submission to biblical truth—even when it’s costly. Participating in and facilitating a destructive fiction about God’s created order harms gender-confused children and dishonors God. Such refusal to participate in a fiction is going to be costly, but God has told us our walk with him will be costly as Jesus’ walk for us was. If we refuse to pay these costs now, our cowardice and selfishness will pass on even greater costs to our children and grandchildren.

Fifty years ago, who would have predicted that God would place kindergarten teachers and wedding florists and cake-bakers on the frontline of the cultural war for truth about sexuality and marriage? All believers should be prepared to answer when God calls, and other believers should come alongside them during their trials. We look with admiration at the costs of discipleship for men like Dietrich Bonhoeffer, and then when God puts a trial before us, we rationalize taking the path of least resistance. We should be ashamed.

Remember when sexual anarchists told us all they wanted was to be left alone to do whatever it is they do in their bedrooms? Remember when they claimed that their private actions would have no affect on the culture?

Initially their claims seemed believable because all they asked was that society tolerate (i.e., put up with) their private sexual peccadillos. Then they asked for approval of them. Then they demanded celebration and began marching down Main Street in costumes that should have stayed in their closets in their bedrooms.

Then they transmogrified non-marital unions into unions legally recognized as “marriage.”

They then went for citizens’ right to assemble by going after the Boy Scouts.

Then they came into our public schools, including our elementary schools, to introduce malleable minds and kind hearts to positive images of a phenomenon that God abhors, teaching children that Leftist moral beliefs are facts and conservative moral beliefs are hatred.

Then they fought to compel people of faith to violate their commitments to God by using their God-given gifts in the service of celebrations that God abhors.

And now they seek a linguistic revolution. They’re coming for our pronouns.

No stone unturned, no aspect of life untouched by the sullied hand of pagan sexuality unrestrained.

The movement to normalize homoeroticism and gender confusion is the most pressing issue of the day. Leaders in the church, leaders in academia, and leaders in government who don’t understand this or who don’t want to address it need to get out of the way and let those who do lead.