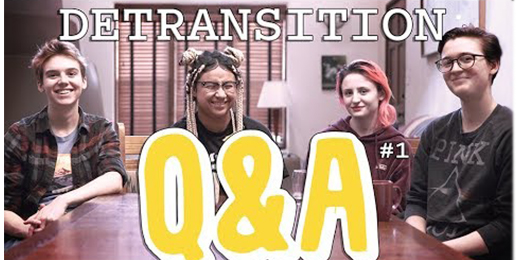 On February 26, the website Public Discourse published an article that includes the harrowing accounts of five mothers—one of whom is a lifelong Democrat, another a lesbian—whose daughters experienced Rapid Onset Gender Dysphoria (ROGD).

These mothers are certain that the culture, including the professional mental health community, physicians, schools, peer socialization, and social media, are providing a distorted lens through which girls are viewing and misinterpreting discomfort and confusion that results from factors like trauma and pre-existing medical conditions, leading them to believe suddenly that they are, in reality, boys.

One of the mothers writes,

My daughter, at age fourteen, spontaneously decided that she is actually a male. After suffering multiple traumatic events in her life and spending a large amount of time on the internet, she announced that she was “trans.” Her personality changed almost overnight, and she went from being a sweet, loving girl to a foul-mouthed, hateful “pansexual male.” At first, I thought she was just going through a phase. But the more I tried to reason with her, the more she dug her heels in. Around this time, she was diagnosed with ADHD, depression, and anxiety. But mental health professionals seemed mainly interested in helping her process her new identity as a male and convincing me to accept the notion that my daughter is actually my son.

At age sixteen, my daughter ran away and reported to the Department of Child Services that she felt unsafe living with me because I refused to refer to her using male pronouns or her chosen male name. Although the Department investigated and found she was well cared for, they forced me to meet with a trans-identified person to “educate” me on these issues. Soon after, without my knowledge, a pediatric endocrinologist taught my daughter—a minor—to inject herself with testosterone. My daughter then ran away to Oregon where state law allowed her—at the age of seventeen, without my knowledge or consent—to change her name and legal gender in court, and to undergo a double mastectomy and a radical hysterectomy.

My once beautiful daughter is now nineteen years old, homeless, bearded, in extreme poverty, sterilized, not receiving mental health services, extremely mentally ill, and planning a radial forearm phalloplasty (a surgical procedure that removes part of her arm to construct a fake penis).

Recently a 14-year-old girl in Canada took her father to court because he doesn’t want her to receive testosterone injections in her effort to masquerade as a boy. The Supreme Court of British Columbia not only decided that she is mature enough to grant consent and may start receiving testosterone immediately but also that,

Attempting to persuade A.B. [the daughter] to abandon treatment for gender dysphoria; addressing A. B. by his [sic] birth name; referring to

A.B. as a girl or with female pronouns whether to him [sic] directly or to third parties; shall be considered to be family violence under s. 38 of the Family Law Act.

This is coming to America. Big government in cahoots with Big “Trans” believes so deeply in the science denying “trans”-cultic religion that it will stop at nothing—not even our front doors—to impose it on children.

In five, six, or ten years A.B. could be Helena, Jesse, Dagny, or Chiara, four young formerly “trans”-identifying women who just launched a website called Pique Resilience Project to shed light on “detransitioning.” They are four women—decidedly not conservative—ages 19-22 who regret “transitioning,” answer “questions for detransitioners and desisters,” and tell their “personal stories and opinions as women who identified as trans and desisted.”

Their website offers several videos, this one of which I would urge IFI readers and political and school leaders to watch:

In an interview with self-avowed feminists Chiara and her mother Denise on 4thWaveNow, an important website for anyone who wants to understand gender dysphoria, ROGD, and the “trans” ideology, lesbian Chiara expresses her adamant opposition to “legislation that would make it illegal for therapists to encourage clients to explore why they feel they must transition”:

I think that would be blatant malpractice. The job of a therapist is to help people overcome issues and develop the best life possible, and transition is not always the right way forward. This would also prevent therapists from digging into deeper issues behind dysphoria. If this law were to go into effect, if would only increase the number of young people who would later detransition.

This interview is a gold mine of important information, but I want to draw particular attention to three more points made by Chiara and her mom:

Chiara: Suicide is used as a “warning to parents: ‘This is what happens when you don’t let your kid transition.’ This mantra continues to be repeated online and everywhere, and perpetuates the idea that suicide is the ‘only way out’ for kids whose parents will not accept their gender identity—this is a false statement that should under no circumstance be peddled to impressionable young people….[S]uicide rates by trans-identified kids are misrepresented and used to threaten and manipulate people into ‘validating’ identities without question.”

Chiara: “Parents are often demonized, called ‘abusive,’ and beaten down by trans activists if they dare to question whether transition is right for their child. Parents are generally not in the habit of brainwashing their children—rather, most want to protect and support them. Asking your child to think critically and consider other factors at play is not abusive, it’s just parenting.”

Denise (Mom): “One of the most pernicious things trans activists and some gender clinicians do is try to drive a wedge between young trans-identified people and their families. While there are certainly abusive parents, the vast majority of us who have serious reservations about the medicalization of our gender-atypical youth do love and care about our kids and only want the best for them.”

In August of 2018, a study on ROGD by Dr. Lisa Littman, physician and associate professor of the practice of behavioral sciences at radical Ivy League Brown University, was published in which she concluded by saying that further research into the phenomenon is needed:

In recent years, a number of parents have been reporting in online discussion groups… that their adolescent and young adult (AYA) children, who have had no histories of childhood gender identity issues, experienced a rapid onset of gender dysphoria. Parents have described clusters of gender dysphoria outbreaks occurring in pre-existing friend groups with multiple or even all members of a friend group becoming gender dysphoric and transgender-identified in a pattern that seems statistically unlikely based on previous research. Parents describe a process of immersion in social media, such as “binge-watching” Youtube transition videos and excessive use of Tumblr, immediately preceding their child becoming gender dysphoric. These descriptions… raise the question of whether social influences may be contributing to or even driving these occurrences of gender dysphoria in some populations of adolescents and young adults.

The worsening of mental well-being and parent-child relationships and behaviors that isolate teens from their parents, families, non-transgender friends and mainstream sources of information are particularly concerning. More research is needed to better understand rapid-onset gender dysphoria, its implications, and scope.

There has been a troubling explosion in the number of adolescents who identify as “trans,” aided and abetted by medical and mental health organizations that have been taken over by leftists. Now the “trans” cult is reaching into families with its grasping, bloodstained claws, dragging children out to destroy their bodies, minds, and hearts, and leaving heartbroken parents in its wake. Finally children scarred and parents betrayed by the “trans” cult are beginning to tell their stories.