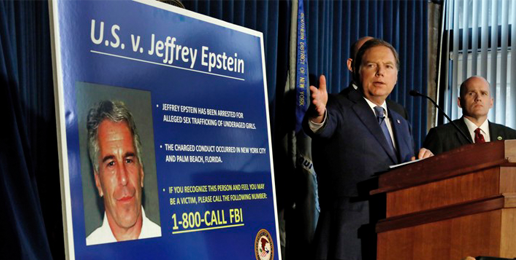 His laughable 13-month sentence after being accused by more than 40 minor girls of sexual abuse is a testament to his connections in high places.  Those guests included the aforementioned former President Bill Clinton, who reportedly ditched his Secret Service detail to travel to the island.  On July 8, Clinton issued a statement claiming that he “knows nothing about the terrible crimes Jeffrey Epstein pleaded guilty to in Florida some years ago, or those with which he has been recently charged in New York.”  The former president stated that he took “a total of four trips on Jeffrey Epstein’s airplane.” Flight logs, however, reveal that he had been on the plane as many as 26 times.

Justice may yet be served.  This week Epstein was served with a federal indictment charged with the sexual trafficking of minors and one count of conspiracy to engage in sex trafficking of minor.  The indictment alleges that he “sexually exploited and abused dozens of minor girls,” some as young as 14, describing the victims as “particularly vulnerable to exploitation.”  Miami Herald journalist Julie K. Brown, who helped break the story, believes that Epstein may have also been providing young girls to others as “sex slaves.”

These are serious charges, which according to renowned legal scholar and attorney Jonathan Turley, could “produce a sentence of 45 years in prison if Epstein were convicted.”

It’s important to keep in mind that people are not convicted in the “court of public opinion,” neither does our legal system allow for “guilt by association.”  Yet if true, the charges raise questions about how much Epstein’s associates knew about his sexual exploitation of young girls – and whether they chose to turn a blind eye.

Courtney Wild states that she was 14 when Epstein’s abuse began, and stated after his arrest:  “I have fought so long to finally see Epstein brought to justice. I didn’t believe the news that he was arrested until I saw him in custody with my own eyes. I want my voice to encourage others to come forward,” she said. “We are stronger together.”

Not a few lamented that Epstein’s initial sweetheart plea deal back in 2008 was evidence of the “elite” escaping having to pay for their crimes.  This week’s arrest and indictment give hope that the wheels of justice, while sometimes turning painfully slow, do continue to spin to their inexorable conclusion.  Doubtlessly more famous names will surface in the days and weeks to come. Let the chips fall where they may and let us hope and pray that this scourge of the sexual abuse of minors will be uprooted from our society.