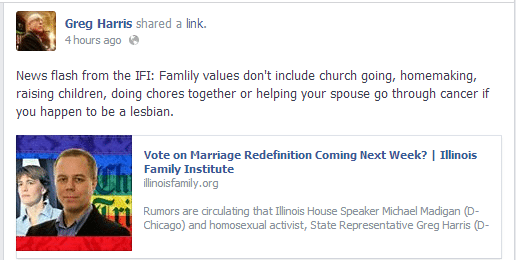 Over the weekend, I was made aware of the Facebook comments of two of Illinois’ elected lawmakers in response to my article on the impending marriage redefinition vote in which I examined the appeals to emotion that are relentlessly exploited by the Left to divert attention from the intellectual shallowness and inconsistency of the Left’s poor arguments.

These Facebook responses illustrate both the dishonesty and lack of maturity that also inform the movement to normalize homosexuality and pervert the legal definition of marriage.

The first was a comment from the bill’s chief sponsor State Representative Greg Harris (D-Chicago) who either completely misunderstood one of the central points of my article or, more likely, intentionally misrepresented what I actually said.

Harris wrote that I believe:

Family values don’t include church going, homemaking, raising children, doing chores together or helping your spouse go through cancer if you happen to be a lesbian.

It is neither honest nor helpful to misrepresent an opponent’s argument. The public deserves more from the elected employees whose salaries they pay.

Moving from the dishonesty of politicians to the lack of maturity of politicians, we can look to the Facebook post of lesbian State Representative Kelly Cassidy (D-Chicago) who wrote this about me:

This is the same woman who described me [Cassidy] as a ‘perfervid promoter of all things homosexual.’ She [Higgins] definitely got a word of the day calendar for Christmas last year.

The response of this public servant who is pushing to radically change the legal definition of society’s bedrock social institution—a change that will diminish religious freedom; undermine the inherent right of children to be raised by a mother and father, preferably their own; inevitably lead to the legalization of plural unions—is to mock the fact that I know words that she apparently does not.

What Harris, Cassidy, Alderman Deb Mell, Mayor Rahm Emanuel, and Governor Patrick Quinn should do is respond to the questions about marriage that IFI has posed: What is marriage? Why is the government involved? If marriage is constituted solely by intense loving feelings, why should it be limited to two people? What is the origin and reason for the requirement that only two people may marry? If marriage is constituted solely by love with no inherent connection to reproductive potential, why shouldn’t close blood relatives or platonic friends be permitted to “marry”? Do children have an inherent right to be raised by a mother and father—preferably their own biological mothers and fathers?

Mockery, dishonesty, appeals to emotion, and a relentless refusal to respond to these central questions about marriage do not reflect well on our public servants and do not well serve the public.

We need to fight for marriage with intelligence, honesty, seriousness, tenacity, courage, conviction, and prayer.

Please, click HERE to to support our work in the public square.