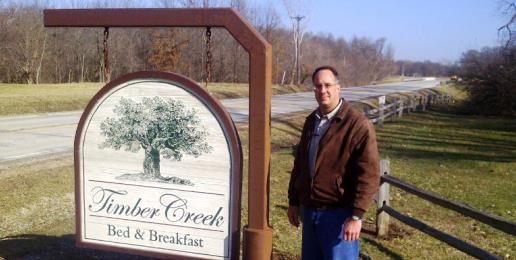 Christian Jim Walder, owner of the Timber Creek Bed & Breakfast in Paxton, Illinois, who because of his faith declined to allow his facilities to be used for the celebration of a same-sex union is not backing down even as the state of Illinois stands ready to persecute him and destroy his business.

Mr. Walder has released the following statement in response to Judge Michael R. Robinson‘s tyrannical decision to fine him $80,000 and force him to offer his facility to a homosexual couple to celebrate a type of union God opposes:

In our opinion, neither the State of Illinois nor the U. S. Supreme Court has the authority to tamper with the definition of marriage. God alone created marriage and declared thousands of years ago that it was to be between a man and a woman. Not two men. Not two women. We may be out of step with an increasingly anti-Christian culture, but we are in compliance with God’s design and that is what ultimately matters.

To be absolutely clear, we cannot host a same-sex wedding even though fines and penalties have been imposed by the Illinois Human Rights Commission.  Our policy will not be changing. We are not looking for a fight, but when immoral laws are purposely passed (or deemed constitutional) that blatantly conflict with God’s Word and when the heavy hand of government tries to force us as Christians to embrace sinful behavior, we have a moral obligation to resist and stand for biblical truth. “It is better to obey God than men” (Acts 5:29).

Please take a moment to stand with Mr. Walder by speaking out against this unjust erosion of religious liberty. Tell people in your church, your neighbors, and your family members about this miscarriage of justice. Write a letter to your local newspaper about this proposed discriminatory act against a Christian man of faith. The First Amendment guarantees the right to the “free exercise” of religion, which includes the right to act upon beliefs regarding the morality of activities and behaviors.

Take ACTION:  Click HERE to send an unequivocal and respectful message to Keith Chambers, the executive director of the Illinois Human Rights Commission, and Gov. Bruce Rauner to express your opposition to Judge Robinson’s decision.

Please keep Mr. Walder, his family, his business, and his attorneys in your prayers. Pray that the members and staff of the Illinois Human Rights Commission recognize the federal civil rights of Jim Walder and choose not to undermine his First Amendment protections.