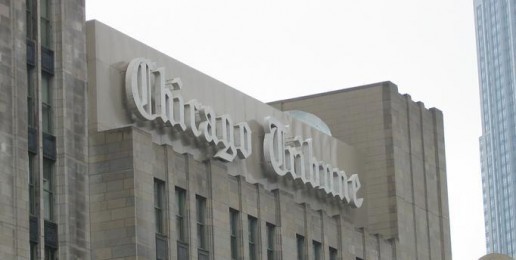 When it comes to the topic of homosexuality, I find most Chicago Tribune editors and columnists intellectually feeble in their efforts to normalize homosexuality. They rarely—if ever—respond to the best conservative arguments being made by the best conservative scholars (e.g., Francis Beckwith, Michael L. Brown, Robert A. J. Gagnon, Maggie Gallagher, and Robert P. George). In addition, they rarely—if ever—respond to the most foundational assumptions, preferring instead to treat the assumptions embedded in terms like “sexual orientation” and discussions of equality, as if they’re proven facts.

Examples of this kind of intellectual feebleness permeate Eric Zorn’s Sunday editorial in favor of “gay marriage.” He posits what he believes are the “top six arguments” against gay marriage and then pontificates on why they all fail. Before I discuss his six specific analyses, I want to list a few of the fundamental questions he fails to address:

Here are the arguments that Zorn believes are top arguments against “gay marriage” and Zorn’s “reasons” why these arguments fail:

The entirety of Zorn’s refutation of this argument amounts to listing examples of lousy traditions (e.g., slavery and the exploitation of workers). Although unclear, his argument seems to be either that since there have existed terrible traditions, all traditions are terrible, or that restricting marriage to sexually complementary marriage is analogous in some particular and heinous way to the “tradition” of slavery and the “tradition” of exploiting workers.

More broadly, does Zorn believe the institution of slavery or the exploitation of workers actually constitutes a “tradition” in the same sense that sexually complementary marriage does? Does Zorn believe in a form of social, political, and moral evolution that deems all change inherently and automatically positive? Isn’t it possible that sometimes societies get it wrong and supplant a good tradition with a bad one?

Zorn argues that the fact that heterosexual couples who cannot procreate (e.g., prisoners or elderly or infertile couples) means that other non-procreative couples should be allowed to marry. Second, he argues that marriage is not solely about procreation. Third, he argues that lesbians who give birth would benefit from the legal framework of marriage.

Zorn seems to think that because the government’s definition of legal marriage derives from a recognition of the link between sexual complementarity and children that any couple that manages to acquire children should be recognized as a marriage. But it is not the presence of children in a household that points to the presence of a marriage. Rather, our legal definition derives from the recognition that sexually complementary relationships are the type of relationship that produces children, and that society has a deeply vested interest in regulating and promoting that type of relationship—even if conditions or volitions prevent procreation from being actualized.

The government recognizes a type of relationship that is by nature procreative, which homosexual relationships are not. The government does not look around to see who has acquired children and conclude that every union in which children are present constitutes a marriage. If a woman and her brother were to fall in love, acquire a child through artificial insemination of the woman (in order to help prevent genetic defects), and raise that child together, should they be permitted to marry?

If all that is necessary for a union to be deemed a marriage is for the members of said union to acquire children who would benefit from the legal framework of marriage, then Zorn has no ethical justification for prohibiting plural marriages.

In the entirety of Zorn’s argument, he fails to even mention the critical ethical issue of children’s rights. Does Zorn believe children possess any inherent, unalienable right to be raised, whenever possible, by their biological parents? Obviously there are parents who are unfit, and some children lose parents through accidents and illness, but homosexual couples are creating children who are deliberately motherless or fatherless. Do those children have rights that are being violated?

3.     Having a mom and a dad is better for children than having two moms or two dads.

Zorn argues that denying “a basic right to a class of people” requires “evidence” by which he apparently means data resulting from sociological research. Not history, biology, or logic will do for Zorn. Nope. He, in demigod-like fashion, has declared that only sociological research will do. Not even President Obama’s Mother’s Day and Father’s Day proclamations in which he argues for the critical importance of both mothers and fathers can dissuade Zorn from his belief that mothers or fathers are expendable.

Then Zorn points to one 2010 study of children raised by lesbians as proof positive that children don’t need fathers. He failed to share that this study has been widely criticized for the following:

Then after declaiming that quantifiable data is an absolute requirement for retaining sexual complementarity as criterion for legal marriage, Zorn argues that even if quantifiable data were to be produced demonstrating the superior value of heterosexual parenting, it would still not justify the retention of historical marital criteria. Huh? The almighty Zorn has created a system or rubric for determining the ethics of marital definitions that only his ideology can win. Talk about a stacked deck.

His justification for his stacked deck goes like this: If data were to demonstrate that some criteria like educational background or marital history correlate with parenting success, society would still never include those as marital requirements.  (As an aside, if there were a group that would consider the inclusion of such criteria, it would surely be “progressives” who seek to have the government invasively micromanage the lives of Americans.)

Zorn’s dismissal of the significance of sociological research points to the fundamental nature of the criteria historically used to define legal marriage. The government isn’t interested in ascertaining the minutiae of good caretaking and using them in the construction of legal marriage.

4.     Legalizing same-sex marriage will put us on the slippery slope toward legalizing polygamy.

Zorn really falls down on the intellectual job here. His argument is that since “same-sex marriage does not fundamentally alter the basic idea of two people agreeing to unite for life and taking on responsibilities,” then it can’t possibly put us on the slippery slope to polygamy.

While same-sex marriage may not alter the basic idea that marriage is an institution composed of two people, it does alter the even more basic idea that marriage is by nature a sexually complementary union. Oddly, while Zorn seems to believe that marriage has no inherent connection to procreative potential, he does believe it’s inherently binary in nature. Zorn never defends with reasons why “binariness” is more basic to the nature of marriage than is sexual complementarity. If gender and procreative potential are irrelevant to marriage, than why retain its binary nature?

Which brings us to some actual reasons why legalizing same-sex marriage will, indeed, put us on the proverbial slippery slope that leads to legalized plural marriage:

Zorn argues that the absence of “measurable detriment” to heterosexual marriages or conventional families in countries and states in which same-sex marriage has been legalized demonstrates that it has not weakened the institution of heterosexual marriage. Wow. That’s a remarkable claim.

Same-sex marriage has been legal abroad for only eleven years, and it’s been legal in the U.S. for only eight years when Massachusetts became the first state to legalize it under then Governor Mitt Romney. Currently, same-sex marriage is legal in only six states and the District of Columbia. One could reasonably argue that this is not nearly long enough to determine whether the institution of heterosexual marriage has been weakened.

It’s also not nearly long enough to determine if children who were created to be motherless or fatherless feel deprived of their right to know and be raised by both their biological parents.

It’s not long enough to determine if the imprimatur that government recognition confers on same-sex marriage further weakens society’s historical belief that fathers and mothers have an obligation to their offspring that supersedes their own desires.

In addition to the problem of the brief time same-sex marriage has been legal anywhere, imagine the complexity of any study that would try to ascertain whether same-sex marriage has weakened the institution of heterosexual marriage. Think of the difficulty in controlling for all the other factors that weaken marriage. And even if such studies did exist, Zorn has revealed that they wouldn’t matter to him anyway.

There are studies conducted by Stanley Kurtz, however, that suggest that when marriage is severed from gender and procreation, it becomes meaningless as a cultural institution and even heterosexual investment in it declines.

Many homosexuals argue that marriage need not include sexual monogamy. Does Zorn entertain the possibility that in another twenty or thirty years this philosophical position may be adopted by heterosexuals, and that such a philosophical shift may not be good for heterosexual marriage?

Zorn also argues that the “fervor with which same-sex couples demand to be granted the dignity and respect of legal marriage underscores the value of marriage and ought to remind us straight couples not to take it lightly.” Zorn reveals that homosexuals want to jettison sexual complementarity from the legal definition of marriage in order to have homosexual unions respected. In other words, laws have the capacity to change feelings, beliefs, and values. Laws function not just to compel behavior, but to persuade and teach. Conservatives too often forget that.

Zorn’s statement also reflects a common refrain that emanates from the presumptuous world of homosexual activism. Increasingly, homosexuals contend that homosexuality is not equivalent to heterosexuality; it’s superior. Homosexuals can teach us heterosexuality-affirming rubes about the real nature and dignity of marriage, just like they can teach heterosexuals how to be better parents.

6.     Homosexual behavior is immoral and ought not be encouraged.

Zorn then gives us his skeletal definition of immoral conduct: “immoral conduct is that which harms others, period.” ‘Nuff said. Oh, except for one teeny problem. What constitutes harm?

Zorn asserts that homosexuals are just asking society to “recognize the line America tries to maintain between personal morality and the judgment of the law.” Well then, since Zorn believes private sexual behavior is not a suitable topic for discussion and all considerations of the personal morality of couples must remain legally off limits, he must support  legalized marriage between adult homosexual siblings.

The problem arises, however, when “private behaviors” and “personal morality” affect the public good, which many believe the affirmation of homosexual conduct does. As Zorn pointed out, the legalization of same-sex marriage necessarily involves affirmation. And one cannot affirm something, grant it dignity, or respect it (which means to hold in esteem) unless one has concluded that the phenomenon is moral.

If there is a bright line between personal morality and the law, which keeps these spheres entirely separate, then why are homosexual activists “demanding” that the government grant dignity and respect to their private relationships? According to Zorn, lawmakers have no such obligation.