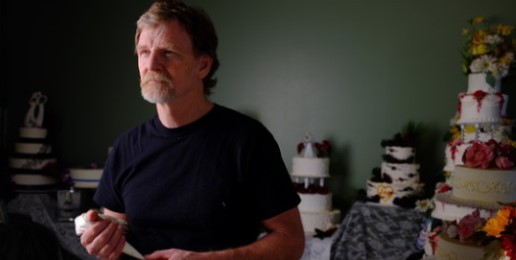 But Big Brother’s ravenous appetite for the consumption of good men and women is not yet sated. The behemoth desires body, will, heart, spirit, and mind. As penance, the baker must also provide what is ironically called “anti-discrimination” training for two years to his employees and make quarterly reports back to Big Brother on their “progress.” Oh, and he has to maintain a list of any and all customers he refuses to serve—which will be a blank piece of paper because he has never refused to serve homosexuals.

Why can’t liberals get this through their thick dogma-encrusted skulls: The baker did not refuse to serve homosexuals. He was and is more than happy to sell baked goods to any and every customer. What he did was choose not to use his time, labor, and creative gifts in the service of a ceremony that God abhors.

This is an outrage and an occasion for civil disobedience. Neither the baker nor his employees should participate in this re-education sham.

Martin Luther King Jr. wrote that “A just law is a man-made code that squares with the moral law or the law of God.” Compulsory re-education in an effort to forcibly inculcate free citizens with non-factual leftist opinions about the nature and morality of homoerotic activity, relationships, and celebrations should offend all freedom-loving Americans and certainly all orthodox Christians.

The claim by “progressives” that the baker’s choice not to participate in a marriage-mockery ceremony is evidence of bigotry is simply nonsense—dangerous nonsense, but nonsense nonetheless. Propositions regarding which acts constitute immoral acts do not constitute “bigotry.” Further, the Left never applies that principle consistently. They never claim that their propositions about which acts are immoral constitute either bigotry or hatred of those who engage in them.

(just wondering, should homosexual activists who threaten IFI employees and all their family members and who swath their threats in bracingly obscene rhetoric attend some anti-discrimination training…)