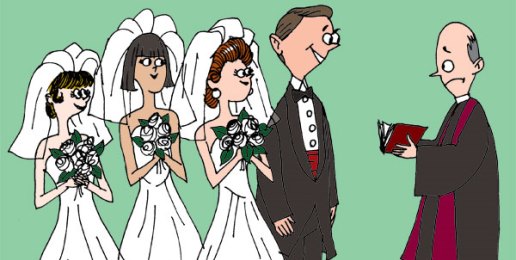 If I had a nickel for every time a liberal said it’s a slippery slope fallacy to claim that the legalization of homoerotic marriage would necessarily result in the legal recognition of plural unions, I would be a very rich woman.

The juxtaposition of two recent Chicago Tribune editorials provides an almost-comical illustration of both “progressive” deceit and ignorance about marriage.

Eric Zorn inveighed against conservative claims about the inevitability of legalized polygamy, describing such claims as “desperate” and “sophomoric,” and then a few days later, Steve Chapman made the sophomoric claim that legalized polygamy is “not so scary.”

He asks, “ If a man is living, procreating and raising children with two or three women, what do we gain by saying he can’t easily formalize his obligations to them?”

In an earlier attempt at deep-thinking about the moral imperative of redefining marriage to serve the desires of homosexuals, Chapman offered a journey through the history of marriage. He was attempting to show that marriage has never had a stable form, but ironically every form of marriage he presented had one constant feature: sexual complementarity.

Much of Eric Zorn’s “argument” consists of a thicket of epithets and generalizations. To him anyone who believes marriage has an ontology central to which is sexual differentiation necessarily regards same-sex couples with “contempt” and “disgust.”

Conservatives in Zorn’s evidently insulated world are “Bible-thumpers and hankie-twisters” who seek to “engage in poisonous debates.” That unseemly crowd includes, I guess, Princeton University law professor Robert George.  Surely, Zorn knows that no defenders of true marriage twist hankies with the kind of vigor that homosexual activists do.

Zorn’s real knee-slapper is his claim that “legalizing plural marriage” would be a “far bigger leap” than the legal recognition of homoerotic unions as “marriages.” He argues that there is a “vast difference between same-sex marriage and plural marriage when it comes to social and legal implications and…civic reverberations.”

That he believes this is astounding.

Jettisoning sexual differentiation from the legal definition of marriage is a leap of far greater enormity than eliminating the criterion regarding numbers of partners. It is, in fact, the most radical redefinition of marriage in history. Its civic reverberations have been already and will continue to be profound, shaking the very foundations of America. At no time in our history have First Amendment religious, speech, and assembly protections been threatened as they are now.

[T]his is not one of those rare issues like abortion that will never resolve and fade away no matter what the Supreme Court says. It’s more like the issue of integration of public schools, an idea that was deeply polarizing at the time of the 1954 Brown v. Board of Education ruling but opposed today only by the most virulent racists.

The marriage controversy will remain, and it will remain only in part because of the usurpation of the democratic process and lousy legal reasoning in Obergefell. It will also remain because eradicating First Amendment protections tends to provoke conflict.

But more fundamentally, cultural turmoil will remain because the philosophical assumptions that justify the legal recognition of non-marital unions as marriage are wrong. Just as preborn babies have a nature that sophistry can never fully conceal, so too does marriage. As with legalized feticide, opposition to same-sex faux-marriage will continue because the assumptions upon which it depends are false.

Homosexuality is not analogous to race. Zorn continually compares homoeroticism to race but doesn’t explain what constitutes either. Until recently, most people understood that race was a biologically heritable condition that carried no inherent implications regarding feelings or volitional acts. In contrast, homosexuality is constituted centrally–if not solely–by subjective feelings and volitional acts. Moreover, as conservatives learned over the past year, even homosexual scholars assert that “sexual orientation”–unlike race–is fluid.

The post-Dolezal understanding of race as a social construct opens up a can of intellectual worms for “progressives” because if homosexuality is analogous to race and, therefore, merely a social construct, one cannot appeal to biological immutability as a strategic way to condemn moral disapproval of homoeroticism. Clearly not all social constructs—which are self-evidently constructions of flawed humans—can be inherently good.

I think we all know the answer to that. They don’t care any more about intellectual soundness than they do about the natural right of children to be raised by a mother and father.

The cool kids are wrong again.

If only liberals would listen to Pope Francis on marriage.

Plural marriage is a’comin’, folks. No doubt about it. Time to teach your children well.