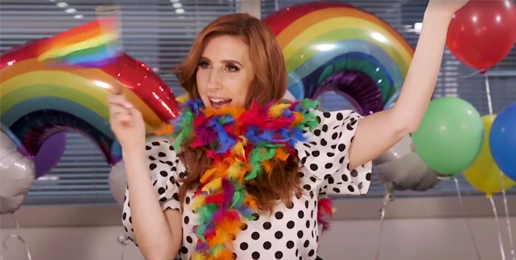 What kind of twisted person makes a YouTube video in which she tells two five-year-old girls and two five-year-old boys that as a “child,” she “questioned” her sexuality and that she watched the movie Nell multiple times in order to see actress Jodie Foster naked?

In a clownish, polka-dotted outfit and surrounded by rainbow balloons, she quizzes these five-year-olds on their understanding of homosexuality, “pride” month, the importance of affirming homosexuality, and the meaning of the term “gay icons”—you know, people like Neil Patrick Harris, Ricky Martin, Lady Gaga, Anderson Cooper, and Jodie Foster, all of whom she lists for the children. Cruikshank tells them that “gay pride” is a celebration of “sexual diversity,” a concept young children have no capacity to understand.

Of course, Cruikshank doesn’t care whether they can understand it because her goal is not understanding. Her goal is indoctrination. Neither does she have any intention of sharing with them that her views are a-historical, arguable, and subversive.

Rather, with a mind shrouded in darkness, she wallows in perverse delight that that these little ones know the terms “gay,” “lesbian,” “transgender,” and “bisexual.” She shows her delight in one little girl’s positive response to the idea of how “cool” it would be to be raised in a fatherless home, cheering her on, saying “Yeah…. so many advantages!”

Cruikshank feeds children putrid dogma and then shamelessly posts her pernicious effort on the Internet for the world to see.

While anyone with a moral compass will be repelled by Cruikshank’s perverse ploy, Minnesota librarians are likely rejoicing. Three public libraries in St. Paul are hosting “drag hours,” at which drag queens (i.e., men who masquerade as women) and drag kings (i.e., women who masquerade as men) will confuse and corrupt preschoolers.

Here are two of the bad lip-syncing, cross-dressing adult men these taxpayer-funded libraries are bringing in to propagandize children:

And here’s one of the cross-dressing women:

The libraries advertise these events as “Suitable” for “Adult, Baby, Preschool, School Age, Teen, Toddler,” urging people of all ages to “Come meet some fabulous drag queens and kings at the library! They will read stories, sing songs, and strut their stuff for an over-the-top story hour.”

These “drag hours” are rationalized as a way to promote “acceptance and inclusion,” to “break boundaries and explore creativity,” to “embrace our differences” and to “share who we are with the world.”

Just attach terms that elicit good feelings to deviant acts—terms like “acceptance,” “inclusion,” and “creativity”—and abracadabra, deviance is normalized and even celebrated.

In the service of acceptance, inclusion, and sharing, maybe next year St. Paul libraries could invite some sex-workers or dominatrices to read picture books about empowerment and embracing to toddlers.

Thinking people know there’s nothing intrinsically good about the acts of accepting, including, or creating, and boundaries are often very good things essential to sustaining the public good.

Boundaries help to rein in the all too often disordered impulses of fallen humans, thereby protecting children and cultivating a climate conducive to human flourishing.

Some “differences” in human behavior should be embraced, and some should be condemned and rejected.

Before inviting cross-dressers to “entertain” toddlers, these Minnesota libraries had to have concluded first that cross-dressing is a phenomenon worthy of being accepted, included, embraced, and shared.