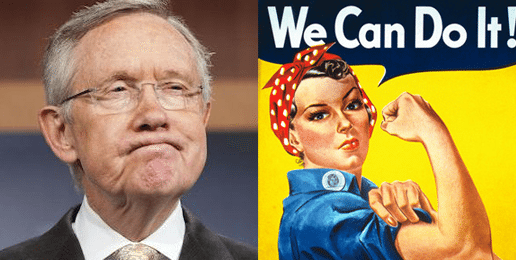 “Tumultuary”: Marked by confusion and disorder

Maybe there’s a silver lining to the cloud created by U.S. Senator Harry Reid’s tumult of confused and disordered thinking. Maybe he has just inadvertently made a case for his own political demise.

Reid, the U.S. Senate Majority Leader from Nevada, was thrown into a paroxysm of anger over the U.S. Supreme Court’s 5-4 decision in the “Hobby Lobby” case, which held that the Religious Freedom Restoration Act (RFRA) protects the right of Christian business owners to refuse to be complicit in the deliberate killing of innocent human life. His anger resulted in Tumultuary Harry’s odd claim that “five white men” must not be permitted to  “determine” “women’s lives.”

How many ways can one sentence be wrong? Well, let’s add ‘em up:

Keep your chins up, women! Ignore the bespectacled, tumultuary, only-white-in-a-literal-sense man behind the lectern who thinks you’re feeble and dependent. You can do it! I know you can! You can eke out a life of meaning with even the little reserve of female power you have left after your Scrooge-y bosses withhold that 20 bucks a month. Your bossy patriarchal oppressors trampling on your uteruses (or in Deb Wasserman’s creepy description, “reaching into” your bodies) cannot keep a good woman down.

And, ladies, while you’re exercising your little remaining vestige of power, maybe you can figure out a way to give that confused white man the heave-ho.