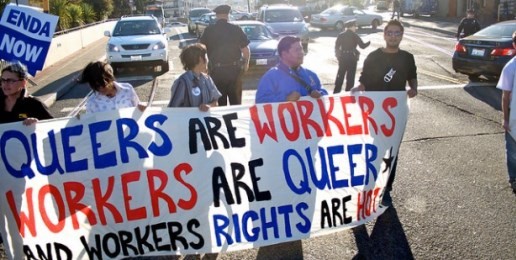 The Employment Non-Discrimination Act (ENDA) is poised to rear its ugly and dangerous head again in the U.S. Senate in the next few weeks. The controversial Democrat-sponsored bill (S. 815) currently has 55 co-sponsors, only two of whom are Republicans: U.S. Senator Susan Collins (ME) and our very own, perpetually irksome U.S. Senator Mark Kirk, who has a particular fondness for all pro-homosexual legislation (don’t say we didn’t warn you). U.S. Senator Dick Durbin is also a co-sponsor.

ENDA “[p]rohibits employment discrimination on the basis of actual or perceived sexual orientation or gender identity by covered entities (employers, employment agencies, labor organizations, or joint labor-management committees).” If passed, no public elementary school or small business owner will be permitted to refuse to hire a man masquerading as a woman.

Every decent human opposes illegitimate discrimination based on objective characteristics that carry no behavioral implications, conditions, for example, like race, sex, or nation of origin. Many people, however, believe that making distinctions among behaviors is not only a legitimate human activity, but an essential one—essential, that is, for any moral society, particularly one in which religious liberty is jealously guarded.

ENDA will curtail religious liberty by prohibiting Americans from making distinctions between right and wrong actions even when those distinctions reflect deeply held religious convictions of orthodox Christians, orthodox Jews, and Muslims.

Our founding fathers knew that religious liberty was essential to a free society. It must never be subordinated to a manufactured civil liberty to engage with absolute unfettered freedom in acts of sexual perversion. And it is not unconstitutional to allow one’s religious beliefs to shape either business or political decisions. The Left does it all the time.

It is true that ENDA has a provision that says employers have the right to require an “employee to adhere to reasonable dress or grooming standards.” It would be foolish, however, for Americans to believe that this language will help employers who don’t want to hire cross-dressers because such perverse behavior violates their religious beliefs and will harm their business.  It would be foolish because progressives believe it is unreasonable to require gender-confused men and women to dress in accordance with their actual, objective sex. To a “progressive,” prohibiting a gender-confused man from wearing lipstick, falsies, and a dress to work as a first-grade teacher or toy store clerk is unreasonable. No young child should ever see cross-dressing (or even hear anything about gender confusion or homosexuality as is happening now in our public schools).

Every homosexuality-affirming policy and bill is based on the conflation of objective conditions with no moral/behavioral implications like race, sex, and nationality, with homosexuality, which is constituted by subjective feelings and volitional behaviors that many consider immoral. Are our foolish lawmakers willing to provide special protections to other conditions similarly constituted—conditions like polyamory, paraphilias, or incest? I can hear the howls of indignation from homosexual activists that their sexual proclivities and theirs alone constitute a morally positive identity. But others will stake that claim for theirs as well. And when “identity,” which in common usage is merely the aggregate of those feelings one chooses to act upon, becomes unassailable, we’re left with a society in which moral judgment is either wholly eradicated or left exclusively to those in positions of power.

Decent people should have compassion for those who are afflicted with gender confusion, gender dysphoria, or Gender Identity Disorder. But decency, compassion, and love do not require people to affirm disordered thinking as right thinking. Quite the opposite. And compassion and love do not require people to set aside their true beliefs about what behaviors are perverse and harmful to their livelihood. Real love requires that we first know what is true. This bill is based on false, destructive assumptions and must be defeated along with any lawmaker who supports it.

Take ACTION: Click HERE to send your U.S. Senators in Washington D.C. an email or a fax asking them to please vote ‘NO’ on ENDA!
(Click HERE to read the current text of this bill.)