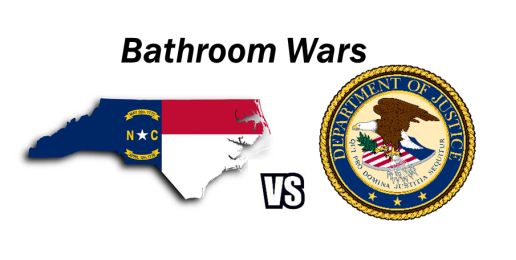 There was good news from North Carolina Monday morning, when Governor Pat McCory announced North Carolina would be suing the Department of Justice (DOJ). That news was followed by bad news from the Department of Justice, announced in a stunning statement from Attorney General Loretta Lynch, who compares those who believe that restrooms should correspond to sex to racists who supported separate restrooms, restaurants, drinking fountains, schools, libraries, and parks for blacks and whites.

Here is an excerpt from the ignorant, bigoted, and demagogic statement from Lynch:

This action is about….the dignity and respect we accord our fellow citizens and the laws that we… have enacted to protect them–indeed, to protect all of us. And it’s about the founding ideals that have led this country–haltingly but inexorably–in the direction of fairness, inclusion and equality for all Americans.

This is not the first time that we have seen discriminatory responses to historic moments of progress for our nation. We saw it in the Jim Crow laws that followed the Emancipation Proclamation. We saw it in fierce and widespread resistance to Brown v. Board of Education…. Some of these responses reflect a recognizably human fear of the unknown, and a discomfort with the uncertainty of change….This is a time to summon our national virtues of inclusivity, diversity, compassion and open-mindedness. What we must not do–what we must never do–is turn on our neighbors, our family members, our fellow Americans, for something they cannot control, and deny what makes them human. This is why none of us can stand by when a state enters the business of legislating identity and insists that a person pretend to be something they are not, or invents a problem that doesn’t exist as a pretext for discrimination and harassment.

…This law provides no benefit to society–all it does is harm innocent Americans.

Instead of turning away from our neighbors, our friends, our colleagues, let us instead learn from our history….[S]tate-sanctioned discrimination never looks good in hindsight. It was not so very long ago that states, including North Carolina, had signs above restrooms, water fountains and on public accommodations keeping people out based upon a distinction without a difference….Let us not act out of fear and misunderstanding….

Let me also speak directly to the transgender community itself. Some of you have lived freely for decades. Others of you are still wondering how you can possibly live the lives you were born to lead….[T]he Department of Justice and the entire Obama Administration wants you to know that ….history is on your side.

Just a few thoughts about her remarkable piece of sloppy and insulting thinking:

North Carolinians and Americans everywhere better not treat this issue like they have treated every other incremental advance of a sexual ideology corrosive to truth and thus to human flourishing. They better be prepared to fight this with every fiber of their objectively male and female beings.