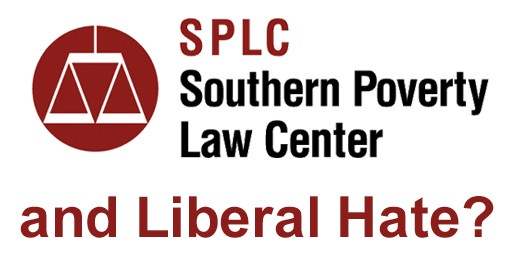 It’s often difficult to distinguish truth from satire on websites like The Onion and the Babylon Bee, and a few days ago many woke up to this headline:

But it’s a real news story, not a joke. It’s from Accuracy in Media, and here is a short excerpt from its report:

The Southern Poverty Law Center, which has a history of flagging its political opponents as “extremists,” apologized to Muslim anti-terrorism group Quilliam and its founder Maajid Nawaz for wrongly naming them in their Field Guide to Anti-Muslim Extremists…

The SPLC also agreed to pay a $3.375 million settlement, which Quilliam and Nawaz intend to use to fund work fighting anti-Muslim bigotry and Islamist extremism, according to a statement from the SPLC.

So the SPLC has actually admitted defamation, but only against one Muslim organization.

Here is what the Alliance Defending Freedom’s Jeremy Tedesco had to say in response to this news:

“It’s appalling and offensive for the Southern Poverty Law Center to compare peaceful organizations which condemn violence and racism with violent and racist groups just because it disagrees with their views. That’s what SPLC did in the case of Quilliam and its founder Maajid Nawaz, and that’s what it has done with ADF and numerous other organizations and individuals.

This situation confirms once again what commentators across the political spectrum have being saying for decades: SPLC has become a far-left organization that brands its political opponents as “haters” and “extremists” and has lost all credibility as a civil rights watchdog…

SPLC’s sloppy mistakes have ruinous, real-world consequences for which they should not be excused.”

National Review’s news writer Jack Crowe also posted on this news and following his article, a video was included that summarizes some of the SPLC’s outrageous defamation examples in 90 seconds.

The Washington Times reported this:

“A coalition of 45 prominent conservative groups and figures called Wednesday on those partnering with the Southern Poverty Law Center to sever their ties, saying the center’s credibility has been further eroded by this week’s defamation settlement.”

The coalition is also threatening a lawsuit against the SPLC and issued warnings to CEOs and news editors who are complicit in the defamation by citing the group’s anti-Christian bias. Here is the text of the joint statement which was also signed by the Illinois Family Institute’s executive director David E. Smith:

We, the undersigned, are among the organizations, groups and individuals that the Southern Poverty Law Center (SPLC) has maligned, defamed and otherwise harmed by falsely describing as “haters,” “bigots,” “Islamophobes” and/or other groundless epithets. We are gratified that the SPLC has today formally acknowledged that it has engaged in such misrepresentations.

In an out-of-court settlement announced today, the Southern Poverty Law Center formally apologized in writing and via video for having falsely listed Maajid Nawaz and the Quilliam Foundation as “anti-Muslim extremists” in one of the SPLC’s most notorious products, The Field Guide to Anti-Muslim Extremists. It also agreed to pay them $3.375 million, tangible proof that the SPLC, which amounts to little more than a leftist instrument of political warfare against those with whom it disagrees, fully deserves the infamy it has lately earned. For example, in addition to its settlement with Nawaz and Quilliam, the organization has had to disavow multiple misstatements and other errors in its reporting in the past few months.

Journalists who uncritically parrot or cite the SPLC’s unfounded characterizations of those it reviles do a profound disservice to their audiences.

Editors, CEOs, shareholders and consumers alike are on notice: anyone relying upon and repeating its misrepresentations is complicit in the SPLC’s harmful defamation of large numbers of American citizens who, like the undersigned, have been vilified simply for working to protect our country and freedoms.

With this significant piece of evidence in mind, we call on government agencies, journalists, corporations, social media providers and web platforms (i.e., Google, Twitter, YouTube and Amazon) that have relied upon this discredited organization to dissociate themselves from the Southern Poverty Law Center and its ongoing effort to defame and vilify mainstream conservative organizations.

The list of signatories can be read following the statement here.

It is also interesting to note this update on the SPLC’s finances from the The Washington Free Beacon:

The Southern Poverty Law Center (SPLC), a left-wing nonprofit known for its “hate group” designations, now has $92 million in offshore investment funds, according to financial statements…

The controversial organization reported $477 million in total assets and $132 million in contributions on its most recent tax forms, which cover Nov. 1, 2016 to Oct. 31, 2017. That represents an increase of $140 million in its total assets from the previous year. Millions flowed to the group following the deadly Charlottesville, Va. attacks from employees at companies including JP Morgan Chase and Apple as well as from actors such as George Clooney.

Google, Twitter, YouTube, Amazon, JP Morgan Chase, Apple, and evidently the SPLC’s itself represent some “deep pockets” when it comes to potential lawsuits and settlements.