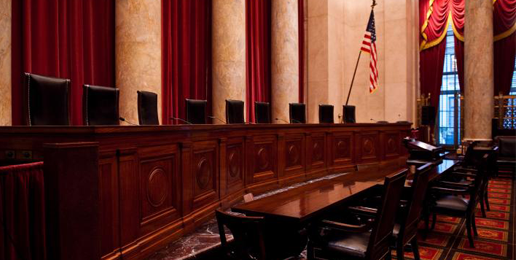 “Progressives” control academia, government schools, the mainstream press, access to information (e.g., Google), social media (e.g., Facebook), professional medical and mental health organizations, the arts, and are infiltrating even churches. And now they seek absolute control over the judiciary through “court-packing.” They want constitutional revisionists to dominate the U.S. Supreme Court even if that means expanding the number of Justices. And some of them openly share their reasons for this proposal, thus exposing the brazenness of their tyrannical quest to transform America into a totalizing and totalitarian “progressive” dystopia.

With Tuesday’s Supreme Court ruling upholding Trump’s Muslim ban, Wednesday’s decision attacking public sector unions, and Justice Anthony Kennedy’s announcement that he’s retiring, it is time to push a once-marginal idea to the top of the agenda: pack the Supreme Court….  A thoughtful court-packing proposal would ensure that the Court more carefully reflects the mores of the time, rather than shackling democracy to the weight of the past…. [T]he time to begin mainstreaming an enlarged Court is now.

The far wiser Richard Weaver, author of Ideas Have Consequences, wrote something a tad different about the weight of the past:

In an article for the online magazine Slate, Osita Nwanevu summarizes the pro-court-packing argument of David Faris, author of the troubling book It’s Time to Fight Dirty: “The argument you’re making here, in sum, is that the time has come for Democrats to throw out some parts of the rulebook of American politics and embrace radical, structural strategies.”

Faris explains—with no evident sign of irony—that his sense of “urgency definitely comes from just this long ideological march off to the right in the Republican Party. That, to me, is dangerous because the Republicans are no longer committed to the spirit of the constitutional framework as it exists. And they’re committed to policies that are going to wreak incredible havoc on this country.”

Have you ever pulled into a parking spot, looked at the stationary car parked next to you, and wrongly perceived your own car—which you forgot to put in park—as stationary and the other one as backing out? That’s the optical illusion Faris is experiencing. Faris wrongly perceives conservatives, who parked their ideological and political car securely with emergency brake activated, as moving rightward while in reality “Progressives” have careered madly leftward.

Faris ironically frets that “incredible havoc” will be wreaked by conservatives. Yes, a card-carrying member of the party that believes it’s ethical to kill humans in the womb for no reason other than that their mothers don’t want them; that destroyed marriage; that recognizes no intrinsic right of children to be raised by a mother and father; that wants to eradicate all public recognition of sexual differentiation; that wants to limit the exercise of religion to homes, hearts, and pews; that put Christian adoption agencies out of business; that seeks to force citizens to lie by using incorrect pronouns in the service of a science-denying cultic belief worries that conservatives will “wreak incredible havoc on this country” and is “no longer committed to the spirit of the constitutional framework.”

The fact that “progressives” in their opposition to constitutional textualists/originalists—whom they know approach the U.S. Constitution with more rigorous fidelity than do “progressive” Justices—focus almost exclusively on the possibility that Roe v. Wade may be overturned would seem a tacit admission that there exists no constitutional right of women to have their intrauterine offspring slaughtered.

Well, here’s some food for thought about Roe v. Wade from “progressives” who support the legal right of women to choose to have more vulnerable humans killed—quotes that shrieking feminists may find wholly unpalatable:

Roe v. Wade, my friends, is the SCOTUS decision that “progressives” argue absolute fidelity to precedent demands Justices uphold. If they think “lousy,” “indefensible,” “barely coherent,” unintelligible, a-constitutional non-reasoning must be honored in slavish service to the political end of allowing feticide, I hate to imagine what they would have thought about revisiting Dred Scott.