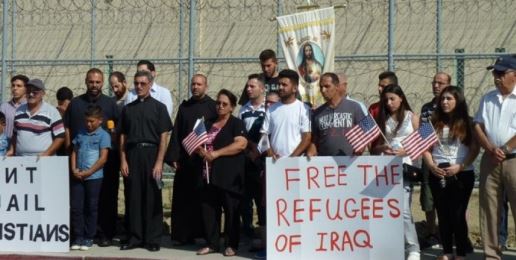 As we have therefore opportunity, let us do good unto all men,
especially unto them who are of the household of faith. ~Galatians 6:10

Donald Trump was elected President of the United States on November 8, 2016. He won the election for many reasons, not the least of which were promises to secure America’s borders and deport illegal aliens, prioritizing any known criminals (for crimes in addition to breaking national immigration laws).

Since inauguration day, January 20, 2017, President Trump has worked diligently to keep that promise, and to stop the flow of refugees and unvettable persons from countries that harbor and/or endorse Islamic jihad.

Both of those efforts to protect U.S. citizens should be lauded and supported.

But there’s one significant issue which must be addressed and remedied quickly. Among the “refugees” from Iraq are an estimated 100+ Christians who were truly endangered by remaining in Iraq, and they are among those detained in U.S. Immigration and Customs Enforcement (I.C.E.) raids and, therefore, scheduled for deportation.

These Chaldean Christians most likely would qualify for asylum in the U.S. according to the necessary requirements:

Evangelist Franklin Graham has weighed in on the distressing situation. Sarah Pulliam Bailey writes at the Washington Post:

Prominent evangelist Franklin Graham says he finds it “very disturbing” that immigration authorities have arrested many Iraqi Christians for possible deportation. President Trump promised earlier this year he would prioritize persecuted Christians, but many international religious freedom advocates say deporting these Christians back to Iraq could put them in serious danger.

Graham, who has been supportive of Trump and his travel ban, urged the president to have someone investigate the cases where dozens of Iraqi nationals were swept up in immigration raids in Michigan and Tennessee.

The arrests came after a deal the United States made with Iraq, which sought to be removed from Trump’s travel ban, as originally proposed, on seven Muslim-majority countries and agreed to accept deported Iraqis. Immigration authorities said all of the Iraqi nationals who were arrested had criminal convictions.

“I understand a policy of deporting people who are here illegally and have broken the law,” Graham wrote on Facebook on Friday. “I don’t know all of the details, but I would encourage our president to give great consideration to the threat to lives of Christians in countries like Iraq.”

As reported at Fox News:

A Detroit federal judge issued a two-week stay Thursday halting the planned deportation of more than 100 Iraqi Christians back to their country of origin.

U.S. District Court Judge Mark A. Goldsmith responded to a habeus corpus petition filed by the American Civil Liberties Union on behalf of 114 immigrants by staying the deportation orders until he decides whether he has jurisdiction to hear the case.

The Justice Department said the detainees must go to immigration court to try to remain in the U.S., not U.S. District Court. But the ACLU said they might be deported before an immigration judge can consider their requests to stay.

Potential physical harm “far outweighs any conceivable interest the government might have in the immediate enforcement of the removal orders before this court can clarify whether it has jurisdiction to grant relief to petitioners on the merits of their claims,” Goldsmith said.

The danger to these Iraqi Christians is real and ominous. Remember the genocide of Yazidis and other Christians in Iraq by ISIS (also ISIL or Islamic State)?

ISIL’s persecution of the Yazidis gained international attention and it directly led to the American-led intervention in Iraq, which started with United States airstrikes against ISIL. Additionally, the US, UK, and Australia made emergency airdrops to Yazidis who had fled to a mountain range and provided weapons to the Kurdish Peshmerga defending them alongside PKK and YPG forces. ISIL’s actions against the Yazidi population resulted in approximately 500,000 refugees and several thousand killed and kidnapped.

Christians in the Middle East live in peril, and according to Open Doors USA, Iraq is number 7 out of 50 on the World Watch List of countries!

Thus, we know as believers we are called to pray for and help our brothers and sisters in Christ. We also know that over 100 of the immigrants which I.C.E. has rounded up for deportation back to Iraq may be Christians. And we know that, if they are Christians and if they are sent back to Iraq, there is a very high probability these Iraqi Christians will be tortured and killed.

We must not only pray, petitioning God Almighty to intervene on behalf of these Christian refugees, we must also ACT now by contacting our representatives in the U.S. Congress and President Trump.

The king’s heart is in the hand of the Lord, as the rivers of water: he turns it wherever He wishes.

Take ACTION:  Click HERE to send a message to President Trump and to your U.S. Representative to urge them to intervene in this somber situation.  Ask them to protect these persecuted Iraqi Christian refugees by allowing them to stay in the United States as permanent residents.  Deporting Christians back to Iraq will put their lives at serious risk.

God can certainly turn President Trump’s heart, as well as the hearts of those in Congress. Please take action and then join us in praying for a good resolution to this situation!

Christians Who Undermine Their Christian Witness

UNESCO: Indoctrinating Humanity With Collectivist ‘Education’
b
a
x
r