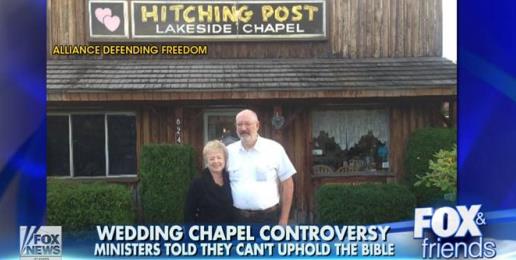 The heavy hand of misused government power is getting heavier by the day.

Given the Obama Administration’s vast abuses of executive power, it’s not surprising that lesser lights are following the Chief Executive’s example and waging “lawfare” on their opponents.

In Coeur d’Alene, Idaho, a pastoral couple who own a wedding chapel are facing a 180-day jail term and a $1,000-per-day fine if they continue to refuse to “marry” homosexual couples. The city says the couple are violating the local anti-discrimination law, which includes “sexual orientation.” Religious freedom? Not so much.

In Houston, it probably seemed like a good idea to Mayor Annise D. Parker, an activist lesbian, for city attorneys to serve five pastors with subpoenas ordering them to turn over all sermons, e-mails, and other communications involving a petition drive against a transgender statute that she had championed.

Wait. This is America. This is Texas, land of the Alamo, where the U.S. Constitution is supposed to restrain would-be tyrants.

Faced with a hurricane of a backlash, the mayor backed off, sort of, reducing the demand to the content of sermons. Let me translate: “Here’s a gun to your head, pastor. Turn your remarks over – or else. By the way, God bless America.”

What should happen swiftly is her removal from office and civil damage lawsuits filed by the targeted pastors. Jesus said to turn the other cheek when faced with insult, but that does not mean stepping aside and allowing bullies to go on to their next victims. By standing up to anti-religious bigotry and unlawful lawfare, the pastors fight for all of us.

As Texas U.S. Senator Ted Cruz said recently, “Caesar has no jurisdiction over the pulpit, and when you subpoena one pastor, you subpoena every pastor.”

The mayor, who misused her power to block a referendum a few years ago that would have curbed the city’s lucrative use of red-light revenue cameras, is not exactly an outlier. Liberals across the land reflexively reach for the big gun or gavel when someone disagrees with their agendas. They live to use government power to force their morals, or lack thereof, on everyone else.

The targets include anyone standing in the way of their imagined utopia of pansexuaity, windmills, bureaucratic supremacy, political correctness and a cowed populace dependent on government handouts.

When judges overturn voter-approved state constitutional amendments protecting natural marriage in the law, they know full well that they’re unleashing the legal equivalent of the hounds of hell on millions of Americans who are punch-drunk from repeated outrages committed by judicial tyrants. Increasingly, people are asking what has happened to our self-governing republic and how do we get it back?

In Wisconsin, a vindictive, partisan state district attorney, John Chisholm, has engaged in lawfare to harass conservative groups working with Republican Gov. Scott Walker. Agents have raided people’s homes and offices, looking for evidence that groups violated campaign finance laws by advocating for policies favored by the governor. A court has since ruled against Mr. Chisholm and halted the witch hunt, but not before it had the intended effect: frightening away contributors to Mr. Walker and conservative groups while Mr. Walker faces a tough re-election against a public-union-backed Democrat.

The tactic is similar to the Internal Revenue Service’s well-documented harassment of Tea Party groups, such as multiple. punitive audits of True the Vote, its founder, Catherine Engelbrecht, and her family’s business, and piling on by other Obama-run federal agencies like OSHA.

Back in Texas, the Travis County prosecutor’s office got a grand jury to indict Republican Gov. Rick Perry on two felony counts in September because he vetoed funding for a statewide public integrity unit run by Travis County District Attorney Rosemary Lehmberg. She had refused to step down after being convicted of drunk driving. The governor thought, not unreasonably, that this disqualified her as an “ethics” officer. The ludicrous charges against the governor will at some point be dismissed, but that doesn’t matter. The idea is to get the media to portray Mr. Perry, a possible Republican presidential candidate, as damaged goods.

The Travis County office is good at this. It’s the same unit that took out Republican House Majority Leader Tom DeLay (TX) when hyper-partisan Democrat Ronnie Earle filed bogus money-laundering charges in 2005. Although Mr. DeLay finally was exonerated in September 2013, Earle’s use of lawfare removed one of the most effective Republican leaders and fundraisers for several years.

In Alaska, two partisan federal prosecutors withheld exonerating evidence and managed to get Republican U.S. Sen. Ted Stevens convicted of making false statements about a home renovation just days before the 2008 election. This cost Mr. Stevens, who died in a plane crash in 2010, his long-held seat and elevated Mark Begich, who gave Democrats a filibuster-proof Senate through which Majority Leader Harry Reid rammed Obamacare.

This year, Mr. Begich’s re-election campaign, unaided by lawfare, is counting on the power of his main message: “Obama Who?”

Elections have consequences, and so should misuse of the legal system by unscrupulous politicians who wage lawfare.