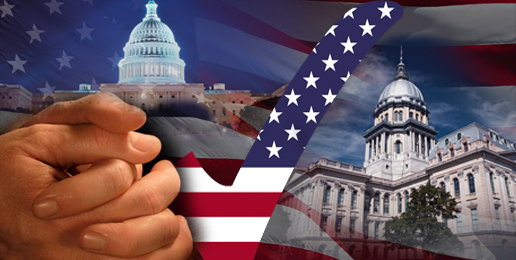 If you haven’t heard the mid-term elections are coming up, you’ve obviously been living under a rock–a giant rock.  Between the constant political calls, mailings, TV and radio ads, and social media headlines, most of us are very aware of the upcoming election on Tuesday, November 6th.

There is a lot at stake for our country in this election. From healthcare to immigration policy to family values, there’s a lot riding in this year’s mid-terms. What are we to do? Here are two things Christians should be doing this election season.

At a recent Bible study at church, we looked at the account of Daniel in Chapter 1 when King Nebuchadnezzar of Babylon besieged Jerusalem. He took over and was running the nation. He took Jews captive and trained them in the ways of the Babylonian culture, changing their language, literature, and names. For three years, he immersed them in a Babylonian worldview. He tried everything to remove their Hebrew background and their God from their lives. This constituted an overreach of “government.” In those days, kings had the final word. They could kill, destroy, rob, and tax without reason or cause.  Today, we are blessed to have a say in our government. We are blessed to have the right to make our voices heard through elections. Go out and vote. You have a privilege many wish they had.

We not only need to vote this election season but also to pray for our government. This is not an option, suggestion, or recommendation but a command. God used Paul in 1 Timothy 2:1 to tell us, “First of all, then, I urge that supplications, prayers, intercessions, and thanksgivings be made for all people, for kings and all who are in high positions, that we may lead a peaceful and quiet life, godly and dignified in every way.”

It is extremely easy to air our disgust on social media. But what if we took that same energy and brought it before the King of kings? What if we went to the One who truly has the power to change things? What if we went into the throne room of God and intervened for our nation? After all, there isn’t anything too hard for Him.  (Genesis 18:14)

Pray for God’s will to be done

In the model prayer in Luke, Jesus taught us to pray for His will to be done on earth.  Let’s pray for God’s will to flourish on Tuesday, November 6th.

Pray for righteousness to prevail

Pray for the leaders who will take office

Pray that the leaders who will be taking office will truly seek the heart of God as they govern and lead. Ask the Lord to surround them with wise advisers who seek God’s will. Pray too for their salvation, which can only be found in the Son of God, Jesus Christ.

Though we don’t deserve His mercy, God truly is merciful and gracious, slow to anger, and abounding in love. Anyone who reads their Bible knows that God’s wrath could come any day because of the sinfulness of this nation and the reluctance of believers to stand strong for the things of God against an increasingly rebellious culture. But 2 Peter 3:9 should encourage us and the verse speaks volumes of His mercy. “The Lord is not slow in keeping His promise, as some count slowness. Instead, He is patient with you, not wanting anyone to perish, but everyone to come to repentance.” There’s also an incredible promise in 2 Chronicles 7:14. “… if my people, who are called by my name, will humble themselves and pray and seek my face and turn from their wicked ways, then I will hear from heaven, and I will forgive their sin and will heal their land.”

Our land and those who live in it are in desperate need of healing.

Remember, there isn’t anything too hard for Him.

“The Harvest is Plentiful…”
b
a
x
r