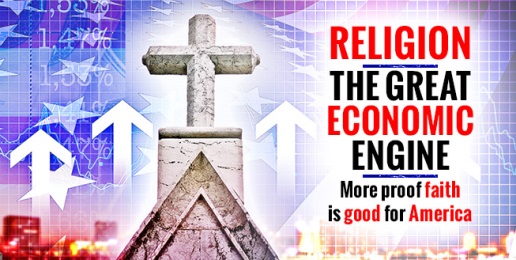 A few months ago on BreakPoint, I mentioned a Pew study that demonstrated Americans’ increasing ignorance of the vital role played by religious institutions in this country. Between 2001 and 2016, the percentage of Americans who think that religion plays a role in solving important social problems fell from 75 percent to 58 percent.

As I said at the time, “part of the problem is that the religious contribution to the common good is so woven into the fabric of American life, most people these days just take it for granted and never stop to think about how prevalent it really is.” In fact, according to another study, half of Americans think that the government could replace religious organizations with no problems and nothing lost.

And now, a new study quantifies just how wrong half of Americans are.

Published in the Interdisciplinary Journal of Research in Religion, the study quantifies that “religion in the United States today contributes $1.2 trillion each year to our economy and society.” That’s “trillion” with a “tr,” or “more than the top ten tech companies combined—including Google, Apple, and Amazon.”

Put another way, if American religion were a country, it would rank 14th or 15th among the world’s economies, just ahead of Russia and just behind Australia. Put still another way, religion accounts for a little under seven percent of our economic output.

Now you still think that religion can just be replaced?

The study conducted by Brian and Melissa Grim of Georgetown University’s Berkley Center for Religion, Peace, and World Affairs reminds those willing to listen that the nation’s 344,000 religious congregations aren’t just houses of worship, “they are also the nucleus of many communities.” They are the “centers for job training, charity, child care, and social events.”

They employ “hundreds of thousands of people, creating jobs, and spend billions of dollars on goods and services, which support local businesses.” And finally, they fund 1.5 million social programs and gather 7.5 million volunteers.

As Brian Grim put it, the benefits of religion aren’t intangible, nor are they limited to the members of these congregations. People of faith serve the vulnerable because of their faith.

A little-known example of this outreach are the 78,000 programs that help “people struggling with mental illness.” That’s three times as many programs as there are Starbucks in the entire world! Yet, while people joke about how ubiquitous Starbucks are, no one takes note of how all-pervasive these programs are.

Without these programs, the communities that rely upon them would be far worse off than they are. And yet an increasing number of Americans think religion can just be replaced.

In light of these findings, think of the recent attempts to force churches to go along with the sexual revolution in places like Iowa and Massachusetts. Both efforts assume a private/public distinction that, as the report documents, just doesn’t exist.

In effect, proposals like the ones in Iowa and Massachusetts punish people of faith for loving their neighbors as themselves. Worse than that, they’re willing to sacrifice the vulnerable among us in the furtherance of the ideological projects of the sexual revolution, a revolution that has already left millions of victims in its wake.

As Brian and Melissa Grim make unmistakably clear, there is no area of life that Americans care about, or at least should care about, in which people of faith, motivated by their faith, are absent. And their presence is making an incredible difference.

Even if people refuse to notice.

When you hear people say we don’t need religion in public life, set the record straight. And be sure to check out the U. S. News and World Report’s article below on the economic value of religion in America.

This article was originally posted at BreakPoint.org.

Stonestreet: The Sexual Revolution: Its Ideas and Its Victims

Marijuana and Psychosis
b
a
x
r