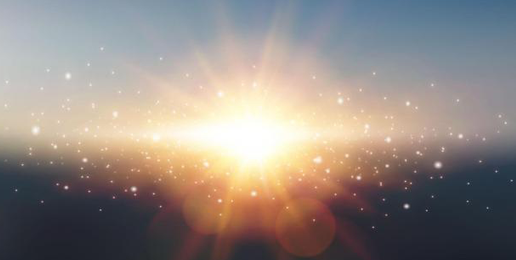 Light, in all of its meanings and manifestations, is directly associated with Jehovah God and with Jesus the Christ.  In fact, a study of light in the Bible can tell us much about God and his intended relationship to Man.  When a concept is mentioned over 50 times in Scripture, we would do well to see why this is so.

Let’s begin with Gen. 1: 2,3.  “Let there be light.”  It is the first action of God in creation, and, I believe this is not an accident.  It is God putting his fingerprints—his very essence—on his creation first.  And we should note that according to John 1: 3-5, Jesus was the agent of this creation.  “He was in the beginning” and “All things were made by him.”

The examples of light being associated with theophanies in the Bible are too numerous to mention.  The burning bush, Moses’ face glowing as a result of having been in the presence of God, Jesus on the Mount of Transfiguration and the resurrected Jesus’ encounter with Saul on the road to Damascus—these are only a few among many well known examples.  In particular, I like the story of the Exodus where Jehovah appears as a pillar of fire to both lead his people and, in one case, to form a rear-guard of protection, preventing the Egyptian army from overcoming the Israelites.  See Ex. 13.

In the Luke 2, we read the story of the announcement of Jesus’ birth to the lowly shepherds.  They were out in the fields near Bethlehem, keeping watch over their flocks by night.  But why did God choose the night shift to make this grand announcement?  Perhaps it was to further dramatize his presence and the message of Who was coming.  Recall, as the angels appear by the thousands, “the glory of the Lord shown round about them” and understandably, the shepherds were terrified.  I believe it is instructive for us to not only listen to God’s message but also to observe the whole package.  How, where and to whom does God communicate.  I Timothy 6:16 tell us that “God dwells in unapproachable light”.  Some of that light came to Bethlehem that night.  Isaiah 9:2 characterizes this event 700 years in advance by saying: “the people walking in darkness have seen a great light.”  Did Isaiah have any idea of the significance of what he was saying?  Probably not, but God did.

In John 8, we find one of the greatest theological entries on this subject in all of Scripture.  Jesus says “I am the light of the world.”  A powerful connection to the doctrine begun in Genesis to be sure, but it is further illuminated by the fact that Jesus was teaching during the Feast of Tabernacles.  On the final night of this feast in Jerusalem, the Temple Court was lit up with large menorahs signifying the pillar of fire to memorialize that great moment in Jewish history when God came in power and light to save His people with the Exodus.  For Jesus, in this context, to say “I am the light of the world”, was a clear claim to deity—to being “one with the Father.”  And as if to set the nail, the following chapter tells the heartwarming story of Jesus healing the blind man.  Jesus turned the lights on for this man who had never seen light in his life, but he concludes his own miracle by teaching that those who reject him remain in spiritual darkness.

The Psalms beautifully add to the theology of Light.  In Ps. 119:105, we read “Your word is a lamp to my feet and a light to my path.”  With this as a backdrop, Ps. 27:1 says:  “You are my light and my salvation”.  He is our “light” to help us navigate the present, but he is also our “salvation”, to assure our eternal condition.

I John 1:7 addresses personal relationships saying:  “If we walk in the light as He is in the light, we have fellowship one with another.”  The theology of light in contrast to sin is also made clear in the New Testament.  John 3:19 tells us that “men loved darkness instead of light.”  This is to say:  darkness in all its manifestations—-sin, confusion, lies, language perversion—instead of light—clarity and truth.  Jesus himself teaches in Matt. 5:14 that “we are the light of the world.”  Of course, we have no light source of our own, but only reflect His light.  He encourages good deeds—why, so that “men will see your good deeds and glorify our Father in heaven”—the source of all light.