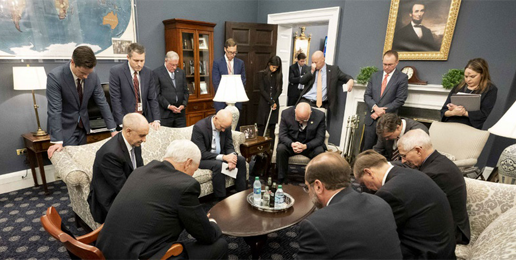 A meme circulating Facebook depicts a disconcerting dystopian scene: A man in a trench he cannot climb out of is warming himself before a fire; he has used the rungs of the ladder he could have used to climb out of the trench to build the fire. So, he has destroyed his own means of freedom for temporary comfort.

Vice President Mike Pence openly prays to His Heavenly Father for guidance before taking action. He is currently being chided for his 2015 response to an AIDS outbreak in Indiana. Does anyone seriously think the time Pence took to pray is actually responsible for more AIDS infection? Yes. Read for yourself:

Pence’s slow response to the quick spread of HIV in Scott County, Indiana in 2015 led to the infection of over 200 people. When the idea of a needle exchange to slow the infection rate of the illness was presented to Pence he responded by saying, “I’m going to go home and pray on it.”[1]

There you have it. The spread of AIDS in Scott County, IN, is Pence’s fault because he took time to pray.

Fast forward to the current “crisis,” the novel coronavirus (COVID-19). Pence is now spearheading the government’s response. What is his first course of action? To pray. To which Fox News’s Jessica Tarlov snarks,

When was the last time Newsweek or anyone in the MSM spoke against euthanasia? Anything other than glowing approval of abortion up to birth? Giddy joy for no medical care for born-alive aborted infants? I have a question for those, like Tarlov, who warm themselves at the self-conceited bonfires du jour: How many living infants were left to die following abortions; how many infants were dismembered in utero; how many children began transsexual disfigurement, chemical or surgical, in the time it took for her to utter her ill-considered denouncement of Pence and prayer? Though she claims this is not “about insulting prayer,” it is precisely that. Rather, it is about insulting the one to whom prayer is addressed. It is blatant and open anti-Christianity. Pence is unqualified because he is a practicing Christian according to Tarlov.

It’s not as though the Newseek authors and Tarlov don’t have their own religion. They do. When Newsweek suggests Pence’s prayer caused greater suffering, and when Tarlov dismisses prayer as a rightful response in the modern era, it is because they have different gods. When government is looked to as the solution for all needs, it becomes a god. Not too long ago some were suggesting a “Scroogian” resolution to the climate crisis: reduce the surplus population. [3]  It still needed to be decided who the surplus were, and who decided.

Yet, we are well on our way with the likes of Bernie Sanders and the advocates of euthanasia. Still, with the advent of COVID-19, it seemed rather ironic there was so much panic in the face of such a natural population eliminator. In all seriousness, what this demonstrates is that those who celebrate abortion but then panic over COVID-19 actually do hold life to be valuable. It is the Creator of life they reject. When lives are in the trenches, it’s the ladders they don’t mind burning.

In his explanation of the First Commandment Martin Luther wrote, “To have a God properly means to have something in which the heart trusts completely.”[4] He builds on that thought in both his Morning and Evening Prayers when he borrows from Christ’s own praying of Psalm 22 on the cross, “For into Your hands I commend myself, my body and soul, and all things.”[5] If we return to the image at the beginning of this short piece, a ladder is the answer to a prayer sent into the trench (i.e., a crisis) in which we live. Either we use it as God intends, or we burn it. It all depends on who we believe sent the ladder, on how we treasure Him and His gifts.

If God is the Creator of all that is seen and unseen, then He is the one who also sustains it. And it is He who daily and richly supplies all our needs. We need daily bread, that is, food. His Son taught us to pray for it. Yet it does not magically appear on our tables. God sends farmers. God still sends favorable weather for crops in due season. We pray for bountiful harvests. Likewise, we pray for good government and peace in our nation, that all our economic efforts may be productive.

We need each other’s vocations, neighbors serving neighbors through our various careers and interests. We live in union with each other. In Luke 12:22-28 Jesus teaches us how the Heavenly Father regards the least of His creatures, birds of the air and lilies of the field. If they do not have a care because He feeds and clothes them, why should we, who are His treasured ones, the ones for whom His own Son died? In all ways it is a matter of perspective. If God is the giver of all good gifts, then we are also the stewards of all He gives.

Pence isn’t only praying—as Newsweek’s and Tarlov’s derision suggests. The VP is also working with people of differing vocations. His COVID-19 Task Force consists of members from many disciplines. Among them are,

When God answers prayers, He sends people of various vocations to be in service to each other through acts of mercy to each other, to be stewards of His gifts to and with each other for the greater good.

So, in the depth of life’s trenches, we pray. (And when aren’t we in the trenches?) He surrounds us by a host of angels. For, He is our refuge and strength (Psalm 46; Psalm 91). Sometimes we might even imagine He sends us a ladder in the form of soap and water to wash our hands, often and much.

America’s Cultural Health May Be Worse Than Its Economic Health