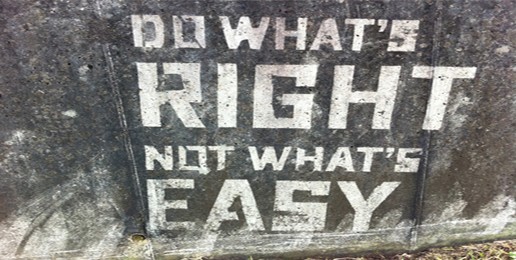 A consensus appears to be developing among otherwise reasonable people that Kim Davis, of Rowan County fame, either needs to start issuing marriage licenses or quit her job.

File this under sentiments which seem extreme at the time, but heroic when the danger is over, and you are reading them inscribed on the base of a polished marble memorial.

But there is a difference between contempt of court and seeing that the courts have become contemptible.

Now while florists and bakers and photographers enjoy a great deal of active support from the broader Christian world, the most people like Davis will get is a sympathetic lack of sympathy. It falls out this way because Christians generally understand the private sector — that’s where they live, after all — but they don’t understand the nature of government. They don’t understand the public sector and the relationship of God’s  Word to it. Their theology develops a distinct limp as soon as they step into the public square, but it is not the kind of limp you might acquire by wrestling with God at Peniel. It is more like what might happen if you dropped the Collected Works of Immanuel Kant on your foot. That results in quite a distinctive limp, one  you see everywhere.

Here is a quick sampling of that sympathetic lack of sympathy:

Carly Fiorina says the clerk needs to comply or move on. Ed Morrissey says the same. Ryan Anderson generally agrees with that, as does Rod Dreher. Note particularly the last comment in Dreher’s piece — that there are hills to die on, but that this is not it.

Update: After Ryan Anderson objected, I went back and reread him. His position is more nuanced than I let on, and so my apologies to him. I still have objections to his solution, but that will require a separate post.

So I want to begin by making an observation about that hill-to-die-on thing, but then move on to discuss the foundational principle that is at stake here. After that, I want to point out what it would look like if more government officials had the same understanding that Kim Davis is currently displaying — despite being opposed by all the intoleristas and also despite being abandoned by numerous Christians who admire her moxie but who don’t understand her moxie.

First, whenever we get to that elusive and ever-receding “hill to die on,” we will discover, upon our arrival there, that it only looked like a hill to die on from a distance. Up close, when the possible dying is also up close, it kind of looks like every other hill. All of a sudden it looks like a hill to stay alive on, covered over with topsoil that looks suspiciously like common ground.

So it turns out that surrendering hills is not the best way to train for defending the most important ones. Retreat is habit-forming.

This brings us to my second goal this morning, which is to highlight the principle. Pick some absurd issue — admittedly a dangerous thing to do in these times that defy the tender ministrations of satire — and that means that to be sufficiently absurd it would have to be an issue like legalized cannibalism. Now let us say that we live in a time, some weeks hence, when cannibalism can be practiced generally on established free market principles (Dahmer v. Illinois, 2023). But if you want to have a BBQ of that nature in a city park, on city property, then you are going to need a permit. Now say that you are Kim Davis’s granddaughter, and your office issues the permits for all activities in all the city parks. Do you issue the permit? Or do you arrange for a compromise? Find somebody in the office not nearly so squeamish as you are? “Hey, Queequeg! Can you handle this one?”

I interrupt this post to anticipate an objection to my choice of illustrations. “Are you saying, Wilson, that same sex marriage can be equated with cannibalism?” Well, no, they are very different sins. That said, they are both very wicked and God hates them both, and county clerks ought not give either one the sanction of law. But I am not trying to equate anything here — I am simply trying to illustrate how a believer’s conscience ought to work if he is employed by a government that tries to sin grievously through the instrumentality of a godly magistrate. This is just how I paint illustrations, with bright yellows and gaudy greens. I do that so that people can see them.

So, follow me closely here. Chesterton once said that art, like morality, consists of drawing the line somewhere. We have a set up where a line must be drawn at some point. And in the abstract all evangelical Christians would almost certainly agree that when that line was crossed, wherever it is, the revolt of the county clerks would be a good thing. With me?

Let me spell it out further. Back in the thirties, if a county clerk had refused a marriage license to a couple because they attended a church where the pastor baptized people with heads upstream, instead of her preferred way, with heads downstream, we would all agree that said clerk had gotten above himself. And if a county clerk expedited and stamped all the processing papers for trains full of Jews headed to Auschwitz, we would all have no problem with said clerk being prosecuted after the war. And when he was prosecuted, “it was entirely legal” would not be an adequate defense. Got that? Two positions, marked clearly on the map, and there is a line somewhere between them.

Where is that line? Why is that line there? By what standard do we make that determination? Who says? These questions cannot be answered apart from the law of God, and that is why we are having such trouble with them. We want a pagan society to respect our sentimental religiosity, and that is not going to happen any time soon.

The point here is not just private conscience. The right to liberty of conscience is at play with florists, bakers, and so on. But Kim Davis is not just keeping herself from sinning, she is preventing Rowan County from sinning. That is part of her job.

Every Christian elected official should be determining, within the scope of their duties, which lines they will not allow the state to cross. When they come to that line, they should refuse to cross it because “this is against the law of God.” They should do this as part of their official responsibilities. This is part of their job. It is one of the things they swear to do when they take office.

This is nothing less than Calvin’s doctrine of the lesser magistrates (Institutes 4.20.22-32), which I would urge upon all and sundry as relevant reading material. And as Calvin points out, after Daniel — a Babylonian official — disobeyed the king’s impious edict, he denied that he had wronged the king in any way (Dan. 6:22-23).

If just ten governors treated Obergefell the same way Kim Davis is treating it, that entire unrighteous and despotic imposition would collapse and fall to the ground. And if they did so, they would not be sinning against the United States. Rather, they would be preventing the United States from sinning.

The end game here is not armed revolution. The end game is simply a refusal to cooperate with their revolution. Make them fire or impeach faithful officials. Once removed, such faithful officials should run for office again with a promise to continue to defy all forms of unrighteous despotism. As one friend of mine put it, “Lather. Rinse. Repeat.”

Don’t tell believers to stay engaged so that they can make a difference, and then, when they start making a difference, tell them that this is not a hill to die on. Make the bad guys reveal themselves. Make them crack down on evangelical county clerks, while continuing to wink at sanctuary cities and local defiance of federal pot laws. Why do they apply their “It’s the law! Bow down!” standard so inconsistently? Well, mostly it is because evangelicals are sweet and naive enough to let them get away with it.

So it is ironic that this valiant stand is being taken by a clerk, because those sidling away from her provide a standing example of our real problem — the trahison des clercs.

Article was originally posted at douglaswilson.com