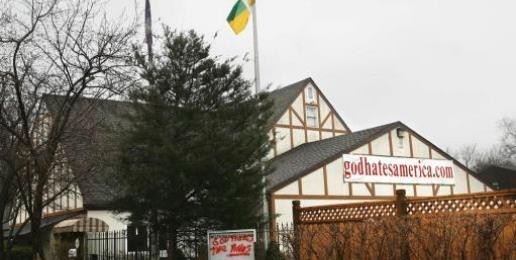 Fred Phelps is dead. The fire-and-brimstone preacher, who for many years was pastor of the institution known as Westboro Baptist Church, died late Wednesday in a hospice in Topeka, Kansas. The announcement was made on his church’s website. The wording was simple: “Fred W. Phelps Sr. has gone the way of all flesh.” Thus brings to an end one of most bitter lives in modern history — and one of the most harmful to the Gospel.

Fred Phelps became infamous due to one central fact — he was a world-class hater. He brought great discredit to the Gospel of Christ because his message was undiluted hatred packaged as the beliefs of a church. Even Mark Potok of the Southern Poverty Law Center referred to Westboro Baptist Church as “this so-called church.” The damage was due to the fact that his platform for hatred was called a church. That provided the watching and listening world with a ready target and case study for the accusation that Christian conviction on questions of sexual morality is nothing more than disguised hatred for homosexuals. And, like radioactivity, Fred Phelps’ hatred will survive in lasting half-lives of animus.

The media made Fred Phelps into a public image, but they could hardly ignore a prophet of antipathy who showed up with his followers in public demonstrations and took his case for public protest all the way to the U. S. Supreme Court. Phelps and the media needed each other and fed each other. The New York Times described Phelps as “a loathed figure at the fringe of the American religious scene,” but he was not a fringe figure in terms of media attention. I have done my best not to add to his publicity, but as calls from the media in recent days made clear, the time has come for a necessary word.

Fred Phelps claimed to preach against homosexuality, calling out sin as sin. “The way to prove you love your neighbor is to warn them that they’re committing sin,” he said in 2004. That is the full lie of a half truth. The way you prove you love your neighbor is to be honest about sin — including our own sin — in order to tell the good news of the forgiveness of sin and salvation in Christ.

Phelps knew exactly what he was doing.  As The Washington Post reported: “He found comfort in being a pariah. ‘If I had nobody mad at me, what right would I have to claim that I was preaching the gospel?’”

But that raises the most emphatic point — it was not the gospel that Fred Phelps was preaching. The gospel is the declaration of the good news that God saves sinners. It is the declaration of the fact that there is forgiveness of sins and life everlasting to be found in Christ and in belief in Him, and that is not the message for which Fred Phelps was known and hated.

He not only preached against homosexuality using the most vile and offensive graphic language possible, but he also took the next step and organized public protests at events such as the funerals for returning American soldiers who died in Afghanistan and Iraq. He was taking advantage of a moment of national focus and personal grief in order to transform a moment of sorrow and honor into a moment of controversy at the expense of compassion. He was a publicity hound in service to the powers of hell — corrupting the gospel of Christ.

Fred Phelps was so engaged in denouncing sin that the good news, the grace and mercy of God in Christ, was never made clear in his message. The gospel was never the point of his message. He did not represent the scandal of the gospel, but rather the scandal of preaching a false gospel. The gospel does not consist of denouncing sin. As the Puritans used to state so well, the preacher must do the “sin work” before declaring the “gospel work.” But the honest and necessary indictment of sin is but the threshold for the declaration of salvation in Christ’s name.

In Luke 15, Jesus told three parables about lostness and foundness, and in every one of them the point is clear — it is the salvation of even one sinner that causes rejoicing in heaven. Heaven is not pleased with the self-righteous preaching of a self-declared prophet. There is no rejoicing in heaven over the self-righteous preacher who does nothing but condemn sin and to do so in the most hateful and angry ways possible.

Fred Phelps made it easy for people to point to him and assert that theological opposition to homosexual behavior is rooted in nothing more than animus and hatred. He made the very point gospel-minded Christians have been trying to refute. He will be held accountable for a massive misrepresentation of the Christian faith, the Christian church, and the gospel of Christ. He single-handedly committed incalculable damage by presenting an enormous obstacle to the faithful teaching of the gospel. He made the job of every Christian more difficult in telling the truth about homosexuality as a sin and in declaring the good news of the gospel that Christ saves sinners.

What was missing is the attitude found in the New Testament. For instance, in First Corinthians chapter 5 and chapter 6, where the Apostle Paul indicts the Corinthian church for its complicity in sexual sin and lists those sexual sins, including homosexuality, and then says, “But such were some of you .. but you were washed.” The Christian gospel is not proclaimed from a position of moral superiority and smugness, but rather from the experience of one who has come to know God’s grace and cannot wait to share that message of grace with others.

We must be very clear about the fact that Fred Phelps’ sin was not that he said that sin is sin. That’s an essential task of every biblical Christian. It was that he seemed to celebrate the sinfulness of sin rather than be brokenhearted over it, and he never saw it as the opportunity — without skipping a breath — to get right to the declaration of the promise of salvation and forgiveness of sins in Jesus Christ. The problem is that Fred Phelps gloried in sin and in his denunciation of sin to the expense of the gospel. The good news of the gospel simply never came through. The grace and mercy of God in Christ were never made clear in his message, and he became an enemy of the gospel rather than a representative of the gospel.

An article published at Slate.com just after the death of Fred Phelps raised a very interesting point and a troubling one as well. Tyler Lopez wrote: “But Westboro’s bombastic vitriol makes room for more casual or calculated anti-gay individuals to claim tolerance, love, and mercy. A quick comparison with Phelps can make even the most vicious anti-gay activists look like saints. By twisting the meaning of love and acceptance through carefully worded statements, homophobes are able to do a lot more damage to the LGBTQ community than a group like Westboro will ever do.”

That’s a very important statement and it’s one Christians need to read very carefully. Gay activist Tyler Lopez is saying that it is impossible to distinguish between the sin and the sinner. Hauntingly, it’s the mirror image of what Fred Phelps was declaring in his message. Fred Phelps represented a hatred of sin that became a hatred of sinners, and now Tyler Lopez, coming from the other direction, says the very same thing in the opposite form. He said it is impossible to say that you love me, if you say that you do not love my homosexuality. This points to the fact that Christians remain in a very difficult position, particularly in this age when Gospel truth-telling is becoming acutely more difficult every single day.

Fred Phelps made our challenge much worse. In this case, Tyler Lopez argues that Phelps made it easier for other people [and here he means evangelical Christians] to sound sane and rational. But the most tragic aspect of his accusation is that Tyler Lopez doesn’t consider our message — that is, a gospel-grounded biblical message on homosexuality — to be any better than Fred Phelps’ message. That’s a sobering realization for all of us. We also face the fact that any statement that same-sex sexuality is sin is going to be heard and condemned by many people as hateful and homophobic. This puts those who are the ambassadors and heralds of the gospel in this generation in an extremely awkward situation.

But, these are our times and that is our challenge. Our commission is to make very clear that we do love people, but we hate sin. And yet that doesn’t start with homosexuals — it starts in the mirror and in the church. And the knowledge of our sin drives us to seek refuge in Christ, in whom we find forgiveness and everlasting life.

Anti-Christian Activists Will Defeat Themselves