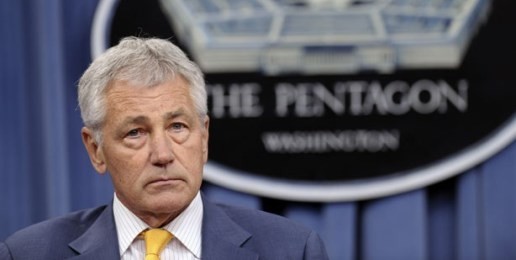 AFA and other pro-family groups have sent a letter to Secretary of Defense Chuck Hagel, urging the Department of Defense to stop using the Southern Poverty Law Center (SPLC) as a resource.

The Department of Defense should stop using SPLC’s fabrications immediately. Add your voice to ours!

The American Family Association has been singled out as a “hate group” in briefings at Camp Shelby, Mississippi, and Fort Hood, Texas by military trainers relying on false SPLC materials.

In one presentation, the photo of Fred Phelps of “God hates fags” fame was disgustingly displayed on a screen with AFA’s logo. Not only did trainers lie by claiming there was an association between AFA and Phelps, they warned our men and women in training that to have any dealings with AFA, including making donations, would be a breach of conduct.

The SPLC has no credibility among people who value truth, and the military should not be using it as a source for training materials for service members.

Take ACTION:  Click HERE to join the coalition of conservative organizations in sending your copy of the letter we wrote to Defense Secretary Chuck Hagel urging the Department of Defense to stop using the Southern Poverty Law Center as a resource.

Read more:  What is Wrong with the Southern Poverty Law Center? by IFI’s Laurie Higgins