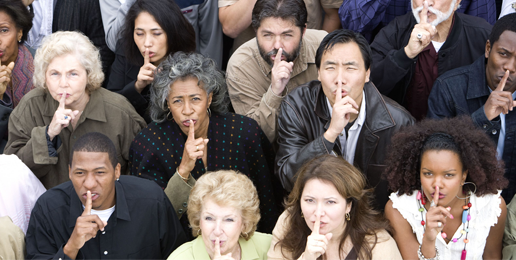 We are by now all familiar with the following chain of events. It has become so common that any deviation from it is rare:

A public figure makes a politically incorrect statement. Their reputation is quickly destroyed in the kangaroo courts of Facebook, Twitter and YouTube. Calls for their firing follow. Friends and colleagues denounce them. At that point, in perhaps the strangest twist of all, instead of fighting back and calling out the aggressors for their obvious dishonesty and intolerance the victim capitulates and issues multiple groveling apologies; with tears. And this goes on and on–until the next ‘thought criminal’ is discovered by the online mob.

You may or may not realize it but these kinds of attacks are happening to people who aren’t even public figures. The mob has come for authors, teachers, small business owners, high school kids…and it will come for you. What will you do then?

The following quote explains a lot about this phenomenon. Writer Barrett Wilson goes into painfully honest detail in an essay over at Quillette revealing the motivation for participation in the mob.

“How did I become that person? It happened because it was exhilarating. Every time I would call someone racist or sexist, I would get a rush. That rush would then be reaffirmed and sustained by the stars, hearts, and thumbs-up that constitute the nickels and dimes of social media validation. The people giving me these stars, hearts, and thumbs-up were engaging in their own cynical game: A fear of being targeted by the mob induces us to signal publicly that we are part of it.”

According to Wilson the motivation of the aggressors is continued belonging to and approval from the crowd. But what about the victims?

Strangely enough, the motivation is the same. It’s two sides of the same coin. Both the bullies and their ever apologizing victims are motivated by the same desire. The desire to belong to and be accepted by ‘the crowd.’ The bullies want to maintain their membership while the victims want to regain it.

Belonging. We crave it. We go to great lengths to gain it. We fear losing it. It is hard to overstate the power of the desire to belong to “the crowd.”

How many self-professing Christians in the public eye over the years, have apologized, obfuscated or simply recanted when challenged by unbelievers about what the Bible says? Instead of saying simply, “Yes. This is what God says, and I believe Him.” How many of us have remained silent or capitulated to lies in our professional and even personal lives when we had opportunities to be gentle witnesses for the truth? We are no different than our unbelieving counterparts when we use political calculations instead of faith in making decisions about whether we should speak the truth or remain silent. That is the opposite of faith and none of us is completely innocent.

God tells us that we cannot serve two masters. It’s not just a bad idea. It’s not possible. It IS possible to stumble and repent (like Peter), but if we find ourselves consistently stifling the truth in order to please the crowd we are fooling ourselves. The stark truth is, the crowd to which so many of us are dying to belong is the crowd on the road to dying. (Matthew 7:13-14)

“If anyone comes to me and does not hate father and mother, wife and children, brothers and sisters—yes, even their own life—such a person cannot be my disciple.” ~Luke 14:26

“If anyone is ashamed of me and my words in this adulterous generation…” ~Mark 8:38

“Not everyone who says to Me, ‘Lord, Lord,’ shall enter the kingdom of heaven, but he who does the will of My Father in heaven. ~Matthew 7:21

The scary language in the Bible is there for a reason. “Do not fear those who kill the body but cannot kill the soul. Rather fear Him who can destroy both soul and body in hell.” (Matthew 10:28) Cowards are first in the list of people headed for the lake of fire. (Revelation 20:10) Fear and the desire for human approval is perhaps our greatest nemesis. The desire to belong to the crowd will lead you to hell.

This article was originally published at For Such A Time As This.