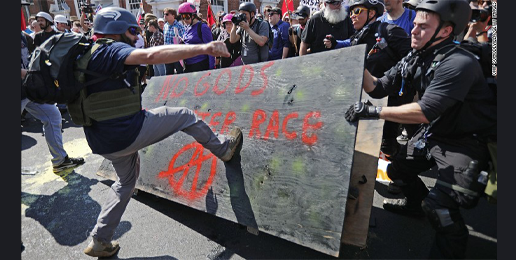 Christians Must Stand Against Racism and with Christ
Written By Jonathon Clay de Hale   |   08.17.17
PRINT

In the wake of the violent confrontation and death in Charlottesville, Virginia, the response of the church seems curiously one-sided. For example, one of my friends, a pastor, expressed his sadness and anger about the events and that he was grateful for those pastors who stood with the counter-protesters.

Most of what I see on social media are denunciations of the Ku Klux Klan (KKK), Nazism, and white supremacy, with calls for pastors to use the opportunity to condemn racism. Since the church of Jesus Christ must oppose any kind of racism, this is a good thing.

But my friend’s post implied that Christian pastors were standing with the counter-protestors, and perhaps suggested that other pastors should too, which is alarming. If Christians aren’t careful, they may be pulled into an association they will later regret.

While the white supremacists must be rejected and categorically condemned for their ungodly ideology, the counter-protestors—known collectively as antifa (short for “anti-fascist”)—are just as ungodly. The two groups live at the extremes of our national politics and are really two sides of the same coin. It is unconscionable for a Christian (much less a Christian minister) to join with either movement.

The conflict in Charlottesville originated with a request from Unite the Right, a white nationalist organization, for a permit to hold a rally protesting the removal of the city’s Robert E. Lee statue. White nationalists, like all American citizens, have the right to gather under the auspices of free speech, no matter how repugnant that speech may be.

And repugnant it is. White nationalism, known also as white supremacy, is a relatively small movement that believes white people are superior to all other races. It includes organizations like the KKK, neo-Nazis, and some armed militias.

Also known as the “alt-right” (“alternative right”), adherents are inspired by fascist movements like Benito Mussolini’s in Italy and Adolf Hitler’s in Germany. The Nazi flag was prominent during the Charlottesville protest, as were tiki torches which called to mind the torch-bearing lynch mobs of the late 1800s and early 1900s. The alt-right despises Jewish people, Christian doctrine, and the American Constitution, and embraces Nietzschean philosophy.

White supremacy, white nationalism, neo-Nazis, the KKK, and the alt-right all share the same goal: a whites-only nation that preserves a white culture rooted in its European ancestors. They would say they are fighting the encroachment of foreign cultures that threaten to eventually supplant “white” culture.

Such ideology has no place in our body politic, which was founded on the Lockean idea that “all men are created equal.” It should also go without saying that such sentiment rejects the biblical teaching that mankind was created in the image of God (Genesis 1:27) and, therefore, all men equally retain a measure of the divine imprint, all are sinners, and all are candidates for salvation, no matter ethnicity or skin color.

In sum, the white supremacist movement is a fringe activist cult that deserves to stay on the margins of society. There must be no uniting with them.

But neither is there uniting with antifa, the anti-fascist movement (sometimes known as the “alt-left”) which is heavily rooted in anarchy and opposition to the state. The September 2017 issue of The Atlantic includes an essay titled, “The Rise of the Violent Left,” in which Peter Beinart writes,

Antifa traces its roots to the 1920s and ’30s, when militant leftists battled fascists in the streets of Germany, Italy, and Spain. When fascism withered after World War II, antifa did too. But in the ’70s and ’80s, neo-Nazi skinheads began to infiltrate Britain’s punk scene. After the Berlin Wall fell, neo-Nazism also gained prominence in Germany. In response, a cadre of young leftists, including many anarchists and punk fans, revived the tradition of street-level antifascism.

Since antifa is heavily composed of anarchists, its activists place little faith in the state, which they consider complicit in fascism and racism. They prefer direct action: They pressure venues to deny white supremacists space to meet. They pressure employers to fire them and landlords to evict them. And when people they deem racists and fascists manage to assemble, antifa’s partisans try to break up their gatherings, including by force.

This explains what we saw in the run-up to the 2016 presidential election and what has followed. Members of antifa consider Trump a racist and have lumped conservatives and Republicans in with white nationalists. That’s why Ann Coulter, Ben Shapiro, Gavin McInnes, Katie Pavlich and Ann McElhinney, Charles Murray and other conservatives have encountered sometimes violent protests shutting down their speaking engagements on college campuses.

It also explains the violence at Trump rallies (click here, here, here, and here). This is not a defense of Trump (some of his supporters were no better) but illustrates what is happening in our country and why.

Perhaps the most even assessment of the events in Charlottesville came from Sheryl Gay Stolberg of The New York Times, who tweeted, “The hard left seemed as hate-filled as alt-right. I saw club-wielding ‘antifa’ beating white nationalists being led out of the park.”

Further, recall that the antifa counter-protestors were, in essence, defending the removal of Robert E. Lee’s statue. Excising history calls to mind the communists of Stalinist Russia or current U.S. nemesis Kim Jong-un, who airbrushed allies-turned-enemies from photos and purged state records of any evidence they ever existed. Where will such a purge end here in America?  Will Mt. Vernon or the Jefferson memorial be next?

The antifa movement is Marxist in form, emphasizing divisive identity politics and class warfare, and sanctioning the use of violence to subvert authority. They are godless materialists who believe that a socialist utopia can be achieved via their views of diversity, equality, and tolerance, and that violent resistance is necessary to overthrow the established order. Anarchy by definition is opposed to the biblical admonition to be subject to the governing authorities (Romans 13:1).

If allowed to progress, both movements—white nationalism and antifa—ultimately end in dictatorship. Hitler and Stalin may have been enemies in World War II, but the sickle and swastika both oppressed their people, just from different directions.

The truth is obvious: Christians must not make common cause with either movement. Yes, we must oppose racism wherever and whenever we find it, but we must not join a violent, anarchical movement simply because it too opposes racism.

We stand against both racism and anarchy, and we do so in the name of Jesus Christ who submitted himself to the ruling authorities to atone for the sins of all men. And it is to Jesus Christ alone whom we owe our allegiance and obedience.