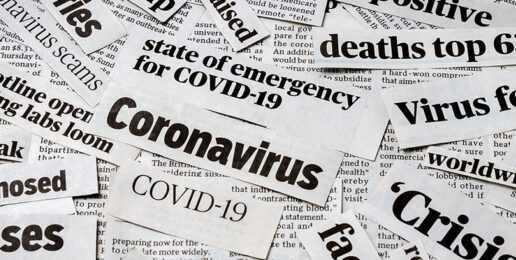 May I be blunt?  The heart of man is just as Scripture says it is, “deceitful above all things and desperately wicked.”  You may not want to hear that, and maybe you don’t believe it. But there Jeremiah 17:9 plainly states this truth. God, in His grace, has provided so that we do not always act as badly as we could act and even now there are glimmers of His grace shining forth.

But, looking at the big picture, things are quite grim. Whether it be the deception of the Chinese government regarding COVID-19, or the politicization of the crisis, or the lying by so many in the Media and government; people are often not inclined to do what is right unless they are squeezed pretty hard. The world is in a crisis yet on every hand we see powerful people either misleading us or turning the crisis to their own purposes! Then, if or when they are forced to do the right thing, they act like it was their plan all along! It would be easy to become cynical!

Trying to get a specific “message” from God regarding the crisis is a fool’s errand. The Book of Job should serve as fair warning to those who think they are able to interpret this crisis for a prophetic word from God. But that does not mean there are no lessons to be learned. There are vitally important truths to be taken from this tragic event that we ought not miss.

First, we are not masters of our destiny. Our lives, the nation–and even the world–can be turned up-side-down in a moment and there is nothing people can do about it! I understand this virus is quite weak and easily killed, yet it has sent the world into panic and has taken millions of lives! If it is weak and easily destroyed, what does it say of us who are defeated by it? Scriptures note that our lives are but a vapor, or like grass that grows up in a moment and is burned off by a hot wind. “The days of our lives are seventy years; and if by reason of strength they are eighty years, yet their boast is only labor and sorrow; for soon it is cut off, and we fly away.”  (Ps. 90:10). Our tenure here is brief and at risk every day.

Thus, our disregard for the spiritual and eternal is tragic; we are so much like the people in Christ’s day. He rebuked them sharply for their indifference to His words. John the Baptist called the nation to repentance and they mocked him. Jesus came with the message of grace and they crucified Him. He said, “we played the flute for you and you did not dance; we mourned to you and you did not lament,” (Mt. 11:17). God has been gracious to us.  In spite of evils such as abortion and the destruction of marriage, He has been patient. When He allows trials to come, people say He is unloving. We ignore Him when He is kind, and despise Him when He gets tough! It is as Ecclesiastes says, “because sentence against an evil work is not executed speedily, therefore the heart of the sons of men is set in them to do evil.”

The pandemic has exposed the fact that the Left’s efforts to undermine America’s foundations have been tragically successful. No nation can long survive when its citizens don’t know where to turn for truth or who to trust. The Left’s war against America’s Christian morality, which began decades ago, has born rotten fruit in the wholesale lying, deception and misinformation which has accompanied the pandemic. As Christians we know better than to put our trust in men. However, most people do not have this understanding and find themselves confused about the nature of the disease, its treatment, and how to avoid it.  Most solutions offered by government officials and the media push the nation towards a totalitarian political framework as we are informed that we must do what “They” tell us to do, as if “They” really know! It is clear that “They” don’t.

Kipling wrote of maturity being marked by one’s ability to “keep your head when all about you are losing theirs. . . .”  This should certainly apply to those who claim the name of Christ. Unfortunately, the Coronavirus crisis has shown that many Christians do not have a sound theology upon which to arrange their lives. This crisis, as bad as it is, should not knock God’s people off balance.

The virus itself is one problem, but it has been compounded by both government officials and media who have in too many cases allowed their personal political and social agendas govern their perspectives and prescriptions. Those of us who name the name of Christ must do better. We have always known that this life is temporary, but we have become comfortable and have settled in as if this world is all there is. But in our hearts we know better. Let us now act accordingly, prioritizing the eternal over the immediate. Don’t let material losses discourage your faith. Do good to all. Be guided by the fact that it is not stuff that makes life worth living but relationships, first with God and then with others.

Don’t be moved by the panic of the press, or the hysterics of the “prophets.” Sadly, the world has been beset by many pandemics through the ages, and it is not likely this will rank even close to the worst. It is not in itself a mark of the “End Times!”  However, in a real sense we should always be living as if we are in the end times because we do not know when the Master will return. Again, let sound theology bring you peace. God told us to “occupy ‘til He comes,” so we should be busy with His business.

Regrettably, in spite of this crisis, most Americans will probably go back to life as usual once it is over. However, there will be some whose eyes will have been opened to the uncertainties of this life and will be hungry for a sure word from God. Let us not miss those opportunities for ministry!

May it be that this pandemic will focus the attention of millions of Christians on the fact that we are “not of this world” and have been given a stewardship by Jesus Christ to be His ambassadors. We are not to melt into the crowd, but to stand apart, calling, even pleading with our neighbors and friends to come to Christ, abandoning the priorities of the world.

A Win for Religious Exemptions
b
a
x
r