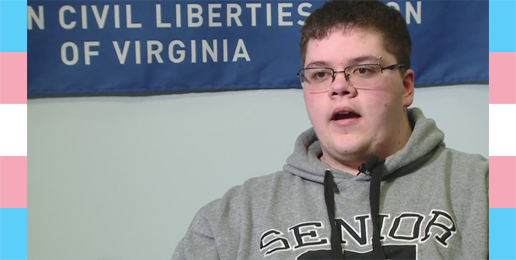 A public-school board in Virginia (Gloucester County Schools) has been court ordered to pay a $1.3 million dollar settlement to a transgender student who wanted to use the boys’ bathroom.

“Gavin Grimm” was born a biological female in 1999, but eventually underwent a legal name change in her freshman year and reconstruction and hormone therapy treatments to transition to her desired status of being considered a male. (Throughout this article, the author will refer to Grimm as a biological female to avoid unnecessary confusion.)

In an attempt to accommodate Grimm, the school built a single-stall restroom as an “alternative” for students with “gender issues.” Apparently, the concession from the school wasn’t good enough for Grimm. Grimm reportedly occasionally refused to use the provided restroom and in 2015 embarked on a six-year court battle to earn the legal right to use the boys’ bathroom (even though she has long since graduated from the school herself).

According to the court decision, “Grimm suffered from stigma, from urinary tract infections from bathroom avoidance, and from suicidal thoughts that led to hospitalization.”

Judge Henry F. Floyd of the Fourth Circuit Appeal Court wrote the majority opinion, in which Judge James A. Wynn joined. Their decision, straight out of Critical Legal Studies, sounds more like an LGBTQIA+ apologetics manual than a legal ruling: “There is no question that there are students in our K-12 schools who are transgender. For many of us, gender identity is established between the ages of three and four years old.”[i]

The justices go on to assert:

“Of course, there are other gender-expansive youth who may identify as nonbinary, youth born intersex who do or do not identify with their sex-assigned-at-birth, and others whose identities belie gender norms. See generally PFLAG, PFLAG National Glossary of Terms (July 2019 – website omitted — explaining that ‘transgender’ is ‘also used as an umbrella term to describe groups of people who transcend conventional expectations of gender identity or expression’)”[ii]

This legal battle regarding transgenderism in schools will help establish case law precedent around the nation. The usual suspects were involved. When it comes to cases involving the destruction of morality and the traditional family, we expect to see the ACLU on scene, and they did not “disappoint.”

Grimm’s case was elevated all the way to the U.S. Supreme Court, who decided not to hear it, thus allowing the favorable Fourth Circuit Court decision to stand. Immediately, Grimm turned her activism to other school boards.

Speaking recently to the nearby Newport News public school board, Grimm said, in what sounded like a legal threat: “I’m speaking to you to make it very clear that discrimination is an open-and-shut conversation here in the Fourth Circuit in Virginia, and it’s very expensive.” She also said: “Any further resistance to affirming the transgender young people in this county is an act of aggression to these students and an act of political preservation by members of the school board.”[iii]

The school board quickly changed their school’s policy and will allow transgender students to use the restrooms of their choice moving forward.

What Could This Mean for Students?

According to the Fourth Circuit Court, there are approximately 150,000 transgender students in the United States today. Now that Grimm has successfully won a heavy lawsuit against a public school, most schools will not risk paying out millions of dollars. They will do as Newport News did and throw open the bathroom and locker room doors as a free-for-all. Far from providing security and protection this puts many students at risk.

One example is the case of an 18-yr-old female student in Seattle, WA who was attacked in a gender-neutral high school bathroom by a male football player named Demonte Rigney. She was forced against her will to perform sex acts on him. [iv]

Another is a 5-yr-old girl in Decatur, Georgia who, because of the school’s pro-transgender policies allowing boys in girls’ bathrooms, was attacked by a male student who identifies as “gender fluid”. The predator student “forcibly touched her genitals despite her protests, causing her both pain and fear.”[v]

The courts are clearly deciding that the rights of some students who pretend to be (or believe to be) of the opposite gender (less than 1% of all students) trumps the right of all students to be assured of their safety on a school campus.

Too many parents hold to the naïve assumption that the public schools of today are the same as the ones they grew up in. Nothing could be farther from the truth! Today’s public school system is an absolute tsunami of leftist indoctrination on topics ranging from Marxism to Critical Race Theory, to gender fluidity, to naturalistic atheism. It is anything but neutral and has strayed far from promoting true academic education.

It is well past time for parents to remove their children from the immoral government school system and choose explicitly Christian education.