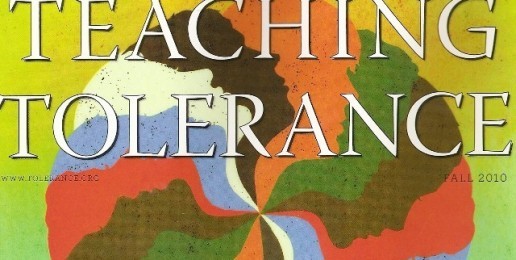 Decades ago, summer was the time that necessitated increased parental vigilance. School was the safe place. But the times they have a’changed. Self-righteous “agents of change” stand ready at the schoolhouse door to mold other people’s children into ideological replicas of themselves. So now the school year has become the time that necessitates increased parental vigilance.

One organization that warrants particular attention is “Teaching Tolerance,” which is laughingly called an “educational project,” but is, in reality, the pernicious propaganda project of the leftwing Southern Poverty Law Center (SPLC). This is the organization that has listed the Illinois Family Institute, Family Research Council, and the American Family Association as “hate groups.”

The propagandists — I mean educators — at Teaching Tolerance are taking full advantage of the propensity of parents to remain blissfully unaware of what their children are being taught. These “tolerance teachers” count on parents remaining ignorant of their goal to undermine conservative moral and political beliefs.

Here is the newest resource spawned by the manipulators of children at the SPLC’s Teaching Tolerance of which parents should be aware:

Planning to Change the World: A Plan Book for Social Justice Teachers 2011-2012

This handbook for teachers begins with a quote from the Brazilian Marxist, Paulo Freire, who is the guru for “social justice teachers” and wrote their bible, Pedagogy of the Oppressed.

Planning to Change the World is a plan book for teachers who believe their students can create meaningful social change. It is the product of a collaboration between two education networks — the New York Collective of Radical Educators (NYCoRE) and the Education for Liberation Network — and is published in partnership with Rethinking Schools. The information and ideas featured on its pages come from teachers, college students and activists who, like you, struggle daily to put their values into practice. As educators, our vision of teaching for liberation often gets buried under the everyday realities of teaching. Bombarded with paperwork, tests, curriculum mandates, we feel frustrated, overwhelmed, alone.

Here are some of the historical events honored just in November by the SPLC’s “educators” from Teaching Tolerance:

[S]tudents will review two written works by Native American authors. The first — a speech written by Wamsutta James in 1970 — gave birth to the National Day of Mourning, which is observed on Thanksgiving by some indigenous people. To them, Thanksgiving is ‘a reminder of the genocide of millions of their people, the theft of their lands, and the relentless assault on their culture.’ The Day of Mourning, on the other hand, is a day of remembrance and spiritual connection, as well as a protest of the racism and oppression that Native Americans continue to experience.”

I wonder if Teaching Tolerance would revise their list of important “social justice” historical events to include mention of Joseph Scheidler, father of the pro-life movement. He is the indefatigable pursuer of social justice for the most vulnerable in America: babies in utero, whose developmental immaturity or imperfections put them at risk of legalized extermination.

As I’ve written before, “teaching for social justice” is, in a nutshell:

Its other dominant features pertain to race, gender, class, and sexual orientation/ identity/ expression. Social justice theory as I’m describing it encourages people to view the world through the divisive lens of identity politics that demarcates groups according to which group constitutes the “oppressors” and which the “oppressed.” Those who are identified as the “oppressors” need not have committed any acts of actual persecution or oppression, nor feel any sense of superiority toward or dislike of the supposed “oppressed” class. The problem with social justice theory is that it promotes the idea that “institutional racism,” as opposed to actual acts of mistreatment of individuals by other individuals is the cause of differing lots in life.

Social justice theorists cultivate the racist, sexist, heterophobic stereotype that whites, males, and heterosexuals are oppressors. This is an offensive, prejudiced stereotype that robs minorities of a sense of agency in and responsibility for their own lives, telling them that their lots in life cannot improve through their own efforts but only through an appropriate degree of self-flagellation on the parts of the purported oppressors. It cultivates a sense of perpetual victimization and powerlessness on the parts of minorities and an irrational and illegitimate sense of guilt on the parts of whites, or men, or heterosexuals.

Finally, social justice theory is distinctly anti-American and hyper-focuses on America’s mistakes and failings. Social justice theory diminishes or ignores the remarkable success America has achieved in integrating virtually every ethnic and racial group in the world, and in enabling people to improve their lots in life through economic opportunity and American principles of liberty and equality.

To learn more about the ethically and intellectually bankrupt Southern Poverty Law Center’s deeply troubling ideology, goals, and tactics, click HERE (this is a very recent and important article from an immigration reform organization on the SPLC’s “phony claims”), and HERE.