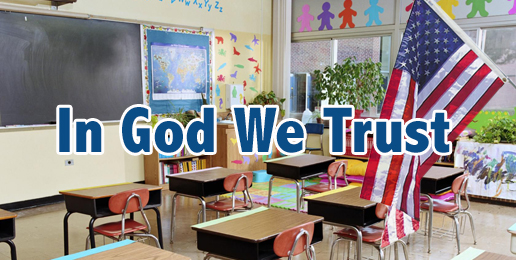 An Illinois lawmaker’s bill to publicly display the motto “In God We Trust” in public schools is the latest challenge to the secularism that is the status quo in many public schools across the country.  Though displaying the motto would not be mandatory, State Representative Darren Bailey (R-Xenia) says his legislation (HB 341) would encourage a return to Christian principles: “As a God-fearing Christian, I believe that the lack of such is the problem in our country today.”

Illinois is the latest state with legislation that would permit the posting of “In God We Trust” in public schools.  Lawmakers in Alabama, Arizona, Florida, Louisiana, North Carolina, and Tennessee have recently voted to require or allow the motto to be posted in public schools.  Sheriff’s deputies in Jefferson County, Illinois, have joined the movement by voluntarily placing “In God We Trust” decals on their squad cars.  Similar bills have already been introduced this year in Alaska, Illinois, Indiana, Kentucky, Missouri, Mississippi, Nebraska, New York and South Carolina.

Atheists like Hemant Mehta of friendlyatheist.pathos.com are outraged by attempts to refer to a Higher Power:

“We certainly don’t need religion to teach common decency and morality when it’s the Christians currently running the government who provide us with a steady stream of corrupt acts and cruel policies.”

Evidently not a very “friendly atheist.”  Critics also say the motto can be alienating to students who are not religious, and allege that it is a violation of the separation of church and state.

But that cornerstone of American secularism – the vaunted “separation of church and state” – never appears in the United States Constitution, but rather first appears in a letter written by Thomas Jefferson to the Danbury Baptist Association dated January 1, 1802.  Jefferson’s chief concern appears to be avoiding the establishment of any denomination as the “state church.”

Garrett Epps, writing in The Atlantic, and arguing against public expressions of faith, claims that the concept of the “separation of church and state” originated not with Jefferson, but with the American theologian Roger Williams, founder of the first Baptist congregation in the British New World.  According to Epps, Williams coined the phrase in 1644 to “signify the protection that the church needed in order to prevent misuse and corruption by political leaders.”

Epps is seemingly unaware that he has undermined his own argument.  The “separation of church and state” is meant to protect the churches from government intrusion – not the populace from exposure to religious teachings.

Those who oppose the influence of Christianity in society are fond of (mis)quoting Thomas Jefferson, one of several deists among the Founding Fathers.  But deism is not atheism, and while Jefferson did not believe in supernatural revelation, he affirmed his belief in one God as well as in divine providence, the divine moral law, and in personal judgment including rewards and punishments after death.

The opponents of Christianity would also do well to study the life of George Washington, the first president of the United States.  George Washington was a devoted Anglican his entire life.  As General of the Army of the Potomac, Washington openly endorsed religious practice – this, mind you, while as a public servant.  He encouraged his soldiers to attend to their religious duties, including “to implore the blessing of Heaven” upon the nascent American Army.  Washington’s archived papers contain hundreds of biblical quotations, figures of speech, idioms, proverbs, and allusions related to his Christian faith.

It seems inconceivable that important aspects of American history are deliberately withheld from public school students – especially when the vast majority hold to a belief in God and subscribe to Christian beliefs.  A Pew Research Center survey found that “an overwhelming majority of the youngest adults continue to believe in God or a higher power: Eight-in-ten of those ages 18 to 29 say they believe in at least some kind of spiritual force.”

It is the height of duplicity to deny the posting of what was unanimously declared by the 84th Congress to be the official national motto of the United States, and which appears on the currency in the purses and wallets of students.  The “In God We Trust” movement is a welcome reaffirmation of the Divine guidance upon which our great country was built.

Take ACTION: Click HERE to send a message to your state representative to ask him/her to support and co-sponsor HB 341.  Simply acknowledging God does nothing to establish a church or a religion, but subtly points to the fact that we are dependent daily on God’s goodness, mercy and grace.