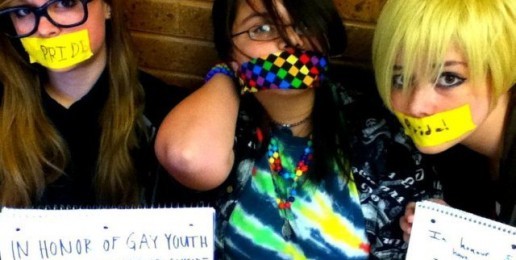 On April 20th, in thousands of schools across America, your hard-earned tax dollars will help underwrite the homosexual indoctrination of your kids. Yes, April 20th will mark the annual Day of Silence, described on its website as “a student-led national event that brings attention to anti-LGBT name-calling, bullying and harassment in schools.” As for those who do not support a special school day devoted to gay indoctrination, they are the ones who can expect to be silenced.

Originally the brainchild of some college students in 1996, the Day of Silence has been aggressively promoted for the last 12 years by GLSEN, the Gay, Lesbian & Straight Education Network. (Based on its activities, GLSEN would better be described as the Gay & Lesbian Sexual Education Network.) GLSEN calls on students to remain silent during non-instructional school times on the Day of Silence, thereby standing in solidarity with LGBT youth who are silenced through bullying and harassment.

But don’t some schools already have generic, anti-bullying programs in place along with special, daylong events to highlight the destructive effects of bullying, a subject that should concern all of us? Of course they do, but that’s not enough. GLSEN insists that a special focus must be put on LGBT kids, as if bullying a gay kid was worse than bullying a fat kid.

But there’s more that takes place on the Day of Silence: A pro-homosexuality message is often sent to the students, with teachers and administrators frequently promoting homosexuality, bisexuality, and transgenderism over the course of the day. That’s why thousands of schools (and not just students) officially participate in the event, with the explicit backing of GLSEN. What about other messages being introduced during the day to balance the discussion? Perish the thought.

Just ask PFOX (Parents and Friends of ExGays and Gays), which announced its intention to hand out literature on the Day of Silence. According to PFOX president Greg Quinlan, “PFOX is calling on students to distribute flyers promoting acceptance of ex-gays. Former homosexuals and their supporters are ridiculed and forced to live in silence. Our nation’s schools deny students with unwanted same-sex attractions any support or fact-based information that feelings can and do change.”

How was this announcement welcomed? According to one gay journalist, “the fact that they are attempting to sneak in their harmful message on the Day of Silence, a day which is supposed to show support for those who are forced into silence by outside pressures, shows just how deceptive their message truly is.”

How dare they introduce their message on the Day of Silence! As expressed in 2004 by gay activist Kevin Jennings, founder of GLSEN and most recently President Obama’s Safe School Czar, “Ex-gay messages have no place in our nation’s public schools. A line has been drawn. There is no ‘other side’ when you’re talking about lesbian, gay and bisexual students.” Ah yes, the voice of tolerance speaks once again.

What about the Day of Dialogue, sponsored by the evangelical Christian organization Focus on the Family, and scheduled this year for April 19th, the day before the Day of Silence? This event encourages “student-initiated conversations about the fact that God cares about our lives, our relationships and our sexuality. . . . [Jesus’] example calls us to stand up for those being harmed or bullied while offering the light of what God’s word says.”

Surely this event will be welcomed, right? Not a chance. As expressed by a professing Christian woman with a self-described “hair-trigger sensitivity for the protection of LGBT youth,” the Day of Dialogue has something “very rotten” at its core. She writes (on LGBTQNATION.com), “Allowing Focus on the Family to export their historical and counter-productive sacred discrimination of the LGBT community to Christian youth is a mistake.” To repeat the words of Kevin Jennings, “There is no ‘other side’ when you’re talking about lesbian, gay and bisexual students.”

Last week an elementary school teacher from Florida called into my radio program, identifying himself as a black male but not wanting to give any specifics about the grade he taught at school. He was concerned that his job could be in jeopardy if he dared speak out against the Day of Silence. (Other elementary school teachers have told me privately that they dare not speak out against the overt homosexual activism they see on a regular basis in their schools – remember, we’re talking about elementary schools – for fear of losing their jobs.)

Although the Day of Silence had not yet been introduced to this gentleman’s school in Florida, the faculty members were discussing strategies for its future implementation, with explicit instructions to present this as a civil rights issue. (Needless to say, this black American also did not approve of equating gay activism with the civil rights movement.) And what should the teacher do if a student raised a religious or moral objection to homosexuality? The conversation, he was told, should immediately be turned back to gay civil rights, and no religious or moral objections should be entertained.