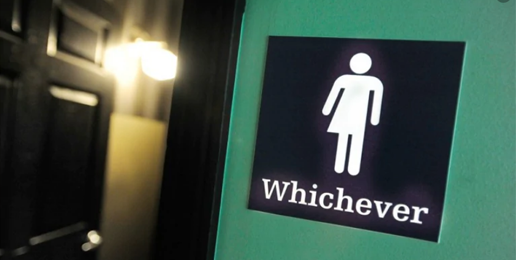 School leaders who sexually integrate restrooms and locker rooms know what they’re doing is based on a lie. Why do I say that? First, let’s take a quick look at what’s happening in those schools that choose to sexually integrate private spaces to accommodate the wishes of students who feel they are or wish they were the sex they are not.

In addition to allowing “trans”-identifying students unrestricted access to opposite-sex locker rooms, these schools provide private changing cubicles for students who don’t want to undress in the presence of opposite-sex students or be in the presence of opposite-sex students who are undressing. For example, schools like the five high schools in Illinois’ District 211 provide what are essentially teeny tiny locker rooms within girls’ locker rooms for girls who don’t want to undress in front of the biological boys who are now allowed unrestricted access to the larger girls’ locker rooms.

Now set that information aside for a moment to look at the analogy on which cultural regressives ground their assertion that restrooms and locker rooms should be sexually integrated: They ground it on the claim that basing private space usage on biological sex is equivalent to racial discrimination. My online debate in September with Alan Mills, executive director of the Uptown People’s Law Center, clearly exposes that common “progressive” position. (As an aside, I highly recommend reading and discussing this debate with your children ages 12 and up.)

Mills (falsely) claimed this about my opposition to the sexual integration of private spaces:

[Y]ou are demanding that women who do not conform to your notion of what a woman should look like should be segregated, because it would make women who look different uncomfortable. This is exactly the argument used for segregated neighborhoods, separate drinking fountains, public accommodations, etc.

Mills was wrong. I said nothing about what women “should look like.” And if by “notion,” Mills means a “belief” or a “fanciful impulse,” he’s wrong again. That women have vaginas, uteruses, and breasts is not a “notion,” nor is it a fanciful impulse about what women “should look like”; it’s a scientific fact. The scientific fact that humans born with penises are male is not a “notion” either. Women are not uncomfortable sharing locker rooms with women “who look different.” Many women are uncomfortable sharing locker rooms with men. And men aren’t different-looking women.

Nor did I say that some women should be segregated from other women in private spaces. I said, biological men (or boys) should not be allowed in the private spaces of women (or girls).

But more important, note that Mills, like countless other self-identifying “progressives,” says that segregating biological men who wish they were women from biological women is analogous or equivalent to separate drinking fountains, lunch counters, or bus seating for blacks and whites.

This common leftist analogy is intellectually vacuous and constitutes the kind of sophistry that smart people with bad ideas use to confuse and deceive others. Mills and his ideological collaborators ignore the fact that while skin color differences have no meaning relative to eating, drinking, or riding buses, sex differences have profound meaning relative to undressing. In fact, sex differences are the very reason we have sex-separated private spaces for men and women. (This points to another lie from leftists. They implicitly claim that the desire for sex segregation when undressing or going to the bathroom has nothing whatsoever to do with sex differences, which raises the question for leftists, how and why did sex-segregated private spaces ever come into existence in the first place?)

Now back to public schools’ provision of teeny tiny, private changing cubicles within girls’ locker rooms for girls who don’t want to undress in front of biological boys who wish they were girls.

Let’s employ the leftist analogy that separate private spaces based on biological differences between the sexes is unjustly discriminatory. If girls’ opposition to undressing in the presence of boys who identify as girls is equivalent to racism, why should schools provide private changing cubicles for those girls? Don’t those private cubicles signify the accommodation of egregious bigotry? If white girls said they were uncomfortable undressing in front of black girls, would schools ever provide private cubicles to accommodate their bigotry? In other words, if we apply the leftist analogy consistently, schools are now providing accommodations for “notions” that the advocates of sex-integrated privates spaces say are intrinsically evil.

I asked Mills the following questions four times, and, tellingly, four times he refused to answer:

School leaders who sexually integrate locker rooms either don’t really believe that sex-segregation in private spaces is bigoted and unjustly discriminatory, or they do believe it is and these tiny, private changing cubicles are just an interim step—a sop to conservative bigots—on the “progressive” path to the total eradication of sex-segregation everywhere for everyone. Community members need to find out which it is.