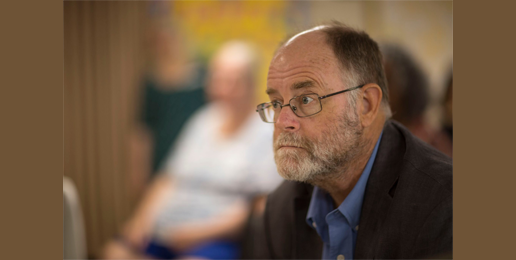 A remarkable and revelatory debate took place on IFI’s Facebook page on Sunday between me and Alan Mills, the executive director of the Uptown People’s Law Center, who received his undergraduate degree in philosophy from Ivy League Brown University and his law degree from Northwestern University Pritzker School of Law. I don’t want to speak ill of the irrational, so I will let you figure out what this debate reveals.

Mills responded, “Would you apply the same test to racial segregation? Why not?”

And the debate was afoot.

Laurie:  I would think that with an Ivy League education and law degree from Northwestern you would have greater facility with analogies.

First, in order for your analogy to work there have to be some points of correspondence between opposite-sex “identification” (or impersonation) per se and race or skin color per se. There are none.

Second, there would have to be some points of correspondence between racial segregation everywhere and sexual segregation in private spaces where sexually differentiated humans undress. There are none.

Segregating races in buses, restaurants, and housing was based on false beliefs about the races. There are no ontological differences between races that meaningfully bear on riding buses, eating in restaurants or being housed. In contrast, sexual segregation in restrooms, locker rooms, shelters, semi-private hospital rooms, jails, and prisons are based on real ontological differences between biological men and biological women. Moreover, these differences meaningfully bear on undressing and engaging in bodily functions.

You evidently didn’t understand my argument, so, I’ll try again.

Not all forms of “segregation” (a loaded term chosen by leftists for its political loadedness) are created equal. I’ll choose a better term: separation. Not all bases on which humans separate are analogous. Some forms of separation are not merely acceptable but good.

Racial segregation was based on erroneous and pernicious beliefs about white superiority and on white hatred of blacks. Sexual segregation in private spaces is based on the true belief that boys and girls, men and women are biologically different and that those differences are meaningful when it comes to being unclothed. Such separation does not reflect any animus of women toward men or vice versa.

Again, biology is irrelevant to the acts of riding buses, drinking at fountains, eating in restaurants, and being housed. Racial segregation was based on animus. In contrast, biologically based sex segregation is relevant to undressing and engaging in personal bodily functions. Separate facilities for men and women when undressing or engaging in personal bodily functions are based on these real differences—not on false beliefs or animus. The reason women don’t want men in their locker rooms is not based on sexual hatred.

Alan Mills: You specifically said that trans women unlike any other women need to use special changing areas—segregated from all other women. Sounds exactly like racial segregation to me.

Laurie: I specifically said no such thing. “Trans-women” are biological men (also known as men), and I specifically said that no biological men should use the private spaces of biological women, which is wholly different from separate lunch counters and drinking fountains for blacks and whites. While skin color differences have no meaning relative to eating, drinking or riding buses, sex differences have profound meaning relative to undressing. In fact, sex differences are the very reason we have sex-separated private spaces for men and women.

Alan Mills: Gender differences are the reason, not sex differences. As I say, you are demanding that women who do not conform to your notion of what a woman should look like should be segregated, because it would make women who look different uncomfortable.

Laurie: Leftists define “gender” as the aggregate of arbitrary socially constructed conventions that we associate with maleness and/or femaleness, both, or neither. Your claim about the reason for segregated private spaces is patently and demonstrably false in addition to being idiotic.

“Gender” differences are not the reason society created separate restrooms, locker rooms, shelters, dorm rooms, semi-private hospital rooms, jails, and prisons. Biological sex differences between men and women are the reason we have sex-separate private facilities for women and men.

My father, my husband, my son, my sons-in-law, and my male friends do not want biological women in their locker rooms. My sister, my daughters, my daughter-in-law, and my female friends do not want biological men in their locker rooms. None of these relatives and friends believes they are superior to persons of the opposite sex, nor do they hate persons of the opposite sex. Rather, they know that sexual differentiation matters when it comes to undressing.

Well, that’s where our debate ended. Alan Mills employed lousy analogies; grossly misrepresented my statements, actually lying about what I said; grossly mispresented history; and refused to answer direct questions. Figuring out whether he is obtuse or engaging in deceitful lawyerly rhetorical manipulation is above my pay grade. What I do know is his beliefs based on nonsensical analogies and lies are dangerous and destructive.

Unless the masses of people tethered to reality and morality rise up and oppose this irrational ideology, this is the end of physical privacy, my friends, the end.