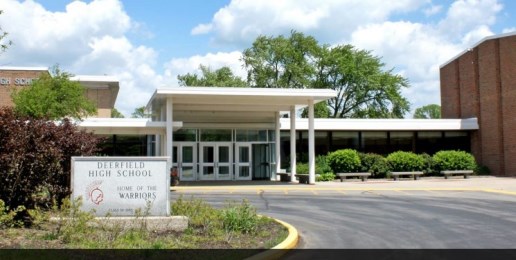 A couple of months ago, Deerfield High School (DHS) in Deerfield, Illinois quietly changed a multi-stall girls restroom to a co-ed restroom. Worse still the administration has not notified either parents or students. Rumors are circulating that the administration chose secrecy over transparency in order to avoid controversy.

This is not a single-occupancy restroom, nor is it a girls restroom restricted to actual girls and boys who wish they were girls. Rather, it is a co-ed restroom euphemistically called an “All Gender Restroom,” presumably to divert attention from the reality of what the administration has created. They have created a co-ed restroom that girls and boys may use together.

But DHS has gone a step further than most schools have yet dared to go in the steady march to obliterate respect for and recognition of the nature, meaning, and importance of objective, immutable sexual differentiation. DHS has skipped over the interim step of allowing only gender-dysphoric students to share restrooms with opposite-sex peers. No intermediate step for the “progressive” science-denying administration at DHS. All boys and girls may avail themselves of this co-ed restroom.

It should be noted that during the day this restroom is in a remote part of the high school and therefore a more convenient place for a sexual assault. This restroom, however, is located near the pool and gyms, so during public events like swim meets, basketball games, and pep rallies, it is easily available to any and all community members. A high school girl or a younger sister of a high school girl may be in a stall when a strange adult male enters.

A faculty member posed this question to an administrator about the brave new bathroom world in which restrooms and locker rooms are invaded by opposite-sex students: What would happen if a girl student said she didn’t want to share a restroom with a boy. The administrator said the school would make separate accommodations for the girl.

Our hapless neighbors in Alberta, Canada are willing to make similar accommodations for the properly ordered desires of girls who don’t want to shower and use restrooms with those whose sex they don’t share. In the “Guidelines for Best Practices: Creating Learning Environments That Respect Diverse Sexual Orientations, Gender Identities and Gender Expressions,” the Alberta government wrote that “A student who objects to sharing a washroom or change-room with a student who is trans or gender-diverse is offered an alternative facility.”

I told my millennial children (who happen to be DHS alumni) about these bizarre statements. Their first response was incredulity, and then they worked out the absurd implications of such fecklessness. First, one girl will object to using a locker room with a boy and will receive a special accommodation. Next, so many girls will express opposition to using locker rooms with actual boys that schools will have to create restrooms exclusively for actual girls, at which point gender-dysphoric boys will complain that they deeply desire to change and shower with girls, insisting on their “right” to use the new girls-only restroom. And then Leftists will step in to stop all this nonsense, claiming that students have no right to privacy based on objective, immutable biological sex.

Alternatively, parents and their representatives on school boards could insist steadfastly and passionately that restroom and locker room policies and practices recognize and respect immutable sex differences.

Then comes the coup de grace. Leftists will demand that all facilities be open to any sex, including those who are not gender-dysphoric. Once society has allowed objectively male persons unrestricted access to women’s private facilities, there will remain no rational justification for prohibiting non-gender-dysphoric males from using opposite-sex facilities.

Kind readers, if you think this is an absurd line of thinking, you have not been paying attention to how “LGBTQQIAP” activists have been using incrementalism successfully for the past 45 years. These are their pernicious goals, and they count on the ignorance and cowardice of Christians—including church leaders, many of whom refuse to lead. While conservatives cower, stubbornly ignoring warnings, “LBBTQQIAP” activists and their accomplices scurry onward, ten steps ahead and bold as brass.

Thanks to ‘Transgender Equality’ Laws, Boys Are Now Sharing Girls’ Locker Rooms
b
a
x
r