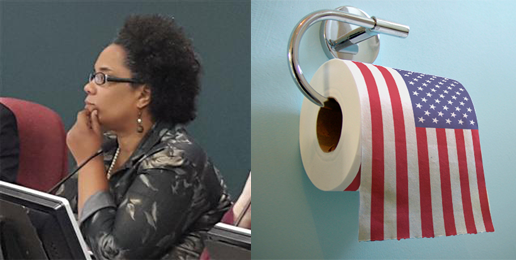 If Illinoisans want to know what’s wrong with public education, look no further than School District U-46, more specifically to the arrogant, self-righteous school board member Traci O’Neal Ellis who never misses an opportunity to insult conservative values through bigoted, divisive, uncivil language.  She is the school board member who has twice gleefully referred to the Republican National Convention as the “Klanvention.”

Evidently wanting to outdo herself in offending a segment of the diverse community whose interests she laughingly claims to represent, she just posted this on her Facebook page:

I’m proud to stand with the sons of bitches on the field today. And I promise you I would #TakeAKnee at school board meetings if my doing so would not be disruptive to KIDS and a distraction to the work we need to do for THEM. But [Trump’s] remarks are nothing more than continued white nationalism at its finest. That flag means nothing more than toilet paper to me. [emphasis added]

By asserting that the American flag means nothing more than “toilet paper” to her, Ellis reveals her crudity and unprofessionalism.

Ellis’ unprofessional comment came to light when a concerned community member sent it to the only  conservative on the U-46 school board, Jeanette Ward, who then re-posted it, with this brief statement:

This was sent to me by a very concerned constituent. A U-46 BOE colleague of mine has stated that our country’s flag means “nothing more than toilet paper”. I disagree in the strongest possible terms. Many patriotic Americans have shed their blood to defend the ideas and ideals America represents. To call it “nothing more than toilet paper” is absolutely despicable and disgusting.

Ellis, incensed that Ward and community members are (justifiably) upset by her juvenile comment, took to Facebook again to rationalize her comment and attack—not Ward’s brief comment—but Ward herself.

Ellis, who is black, began though with a summary of the tragic history of her family going back to the Middle Passage and continuing up to today when, Ellis reports, her family continues to experience racism. Because of this, she says that “The flag and the anthem are symbols in this country of freedom and ‘justice and liberty’ for all. Yet that is a blatant lie for black folks.”

But is it a “blatant lie for black folks”? Is there no justice or liberty for blacks?

I couldn’t possibly list all the blacks who have achieved success in virtually every area of life including the arts,  military, government, journalism, athletics, academia, and medicine. Ellis herself is a sitting school board member and an attorney, and yet she claims there is no justice or liberty for blacks.

Ellis shares that she has “many family members and friends who now serve or have served in the United States military, and they have my deepest respect. But let’s be clear, I can love and respect them without loving a false symbol of hope.”

How is the flag that represents the ideals and principles that have helped rid our nation of the scourges of slavery, slave codes, Black Codes, Jim Crow Laws, and segregation a false symbol of hope? Is Ellis so blind that she cannot see how far this country has come in healing racial division? When I look around, I see daily marvelous evidence of racial unity. I see bi-racial couples, families that include adopted children of diverse races, churches with racially mixed congregations, colleges with racially mixed student bodies and faculties, and racially mixed groups of teens laughing together.

If the injustices that persist because of the fallenness of humans taint the flag for Ellis, then why don’t the great strides we’ve made in America in eradicating racial injustice generate in Ellis a love for the flag?

Jeanette Ward is the most absurd hypocrite I have ever had the personal misfortune to know and have to yield any of my personal time to. She dares to claim free speech to castigate U-46 kids and deny the humanity of our LGBTQIA students. She constantly WHINES about lack of tolerance to diversity of thought and CRIES like a 2 year old that her freedom of speech is being impinged on when anyone dares to disagree with her. Yet she has the unmitigated gall to try to take me to task when I express MY OPINION on the flag on my personal Facebook page. Hey Jeanette (and anybody else offended by what I said), that’s not how free speech and liberty and the flag you love so much works. THAT’S. NOT. HOW. ANY. OF. THIS. WORKS.

Jeanette Ward has never denied “the humanity” of “LGBTQIA students.” When has she castigated U-46 kids and for what? Recognizing the profound meaning of objective, immutable biological sex, Jeanette Ward has worked courageously for the privacy rights of all students, which entailed opposing co-ed restrooms and locker rooms. Perhaps in Ellis’ twisted world, denying students access to the private spaces of opposite-sex persons constitutes “denying” their “humanity.”

All school board members, teachers, and administrators should care deeply about diversity of thought—something woefully absent in many public schools when it comes to matters related to race, sex, homosexuality, and the “trans” ideology. And school board members, teachers, and administrators—who are role models for children—should care deeply about how diverse views are expressed.

Ellis calls Ward’s 63-word comment on Ellis’ offensive Facebook post a galling attack on her speech rights. So what is Ellis’ 842-word screed in which she describes meeting Ward as a “personal misfortune,” and calls Ward an “absurd hypocrite” who “cries like a 2 year old”?

But Ward is not the only target of Ellis’ unrighteous indignation:

Finally, the fact that so many of you are coming UNHINGED over my post actually proves my point. The freedoms you enjoy and the flag you profess to love so much do not extend to me as a black woman. They are not my birthright. Yet I demand them anyway, and that demand includes the right to not feel any patriotism towards a piece of cloth and a pledge of allegiance to a country that does not love me back. Forced allegiance is not patriotism. It is fascism. And I will not bow to that.

Does Ellis actually think criticism of her Facebook post constitutes the denial of her freedoms? Does she think exercising her speech rights requires everyone else to remain silent? When she criticizes Republicans, conservatives, or colleagues is she denying them their birthright freedoms?

Ellis’ pouts that her country “does not love” her back. How did she arrive at that odd conclusion? Because her comment was criticized? Is she kidding? If she’s serious, what does her nasty personal attack on Ward mean? What do the hateful comments about Ward from Ellis’ fans in U-46 over the past six months mean?

Clearly Ellis doesn’t understand why so many people are upset by her adolescent “toilet paper” comment. People feel resentful about Ellis’ comment—not because they desire to force allegiance—but because the comment represents a myopic and distorted view of America, which is shaped by Critical Race Theory and promulgated as truth in public schools.

This ideology promotes an imbalanced, cynical view of American history. It encourages students to view the world through the divisive lens of identity politics, which separates people into groups according to who are the purported oppressors and who the oppressed. It cultivates a sense of undeserved guilt on the part of the alleged oppressors and robs minority students of a sense of agency in and responsibility for their own lives. Critical Race Theory (or teaching for “social justice”) is distinctly anti-American, hyper-focusing on America’s failings while diminishing or ignoring the remarkable success America has achieved in integrating virtually every ethnic and racial group in the world, and enabling people to improve their lots in life through economic opportunity and American principles of liberty and equality.

The American flag that drapes the coffins of soldiers who have given their lives for this country—the country into which millions of people have sought and continue to seek refuge—is to Ellis something that people should use to clean themselves after defecating.

Ellis has a First Amendment right to say anything she wants, and her community has the right to decide whether she truly seeks to represent all members of her community in a professional manner.  Ellis doesn’t seem to realize that school board members are role models for children or that she is a lousy one. If I were a member of her community, I would use my birthright freedom to give her the heave-ho.

Kneeling Down for Our Anthem is Standing Down on Our Responsibility

Where Were Conservatives on Monday Night?
b
a
x
r