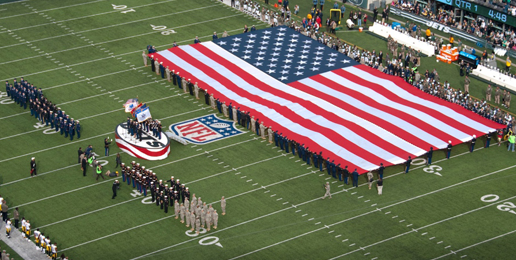 Kneeling Down for Our Anthem is Standing Down on Our Responsibility
11.10.17
PRINT

One could make the argument that the most important documents of the United States, hailing it as the most unique and blessed nation in the world, are The Declaration of Independence and the U.S. Constitution.

However, most Americans are more familiar with and can recite our national anthem, The Star Spangled Banner. A musical essay of words that reminds us of the love Americans have for this unique country.

The author of those words was Francis Scott Key, a gifted amateur poet and a professional attorney hired to negotiate the release of an American civilian imprisoned by the British at Fort McHenry, that fateful second week of September in 1814, during what many historians refer to as the “Second War of Independence.”

The poem was written while he was stranded on a ship in Chesapeake Bay, witnessing the lengthy British bombardment of the American fort and those defending it.

Francis Scott Key wrote The Star Spangled Banner out of the emotions that welled up from seeing Americans being unjustifiably persecuted, and with every ounce of strength they had, rise up and fight for their freedom and their God-given rights. They knew what was at stake! They stood up and fought back against unsurmountable odds.

They didn’t take a knee.

We stand when The Star Spangled Banner is played because of the freedoms and rights our country offers, but more importantly, we stand to honor those who gave their lives to defend those rights and keep those freedoms intact.

Are we a perfect nation? No! But as important as it is to protect the right to peacefully protest problems that exist in our society, it is equally important to recognize that as others offend us, they lose the opportunity to find solutions to those very problems.

Commissioners and owners of pro sports teams have let this politically incorrect protest spiral out of control.

It is like a parent letting the kids run the house, or animals run the zoo, or yes, inmates run the prison, as Houston Texans owner Robert McNair was quoted as saying recently.

There is a time and place for bringing forth issues in our country that could be improved.

Protesting disapproval is taking a stand, not a knee.

The platform given to those very blessed performers, athletes and politicians comes with an unwritten humble expectation. Do Your Job! Protesting concerns on your own time is on you. Dividing a nation should not be one of those activities.

Some columnists have criticized the use of the National Anthem prior to games as a tool to protest and divide and thus shouldn’t be a part of a sports event.

But where have you ever gone, or ever seen, over a few minutes when small groups (youth sports) and very large groups (college and pro stadiums) of people stand together to honor one nation under God?

The National Anthem above all other poems, songs, documents or moments in American history has stood the test of time as a unifier, not a divider.

That’s exactly why it should be played, to remind us to stand in a unifying moment and remember we live in the greatest country in the world.

You want to protest? Use your First Amendment rights to peacefully protest your concerns. You’re an athlete who makes millions per year? Organize a group that agrees with you. Millions of people before you have fought and died for you to have that right.

David Hildebrand, the director of the Colonial Music Institute has studied the words of The Star Spangled Banner for years.

He calls the lyrics from Mr. Key, a modest churchman, a hymn of redemption. “It’s a hymn of, ‘We’ve been saved! The fact I can see the flag means the fort has not been taken.’ It’s the ultimate statement of relief with a capital R, and that emotion gives the song a really strong appeal.”

In the fourth and final stanza of the finished anthem, Key writes, “Then conquer we must, when our cause it is just, And this be our motto- “In God is our Trust.””

Joe Paschen is a born again Christian husband, father of 7, USMC veteran (1973-75), free-lance broadcast-journalist for over 40 years (who has covered all amateur and pro levels of sports), a researcher of history and a veteran bartender for over 40 years.

Where Were Conservatives on Monday Night?