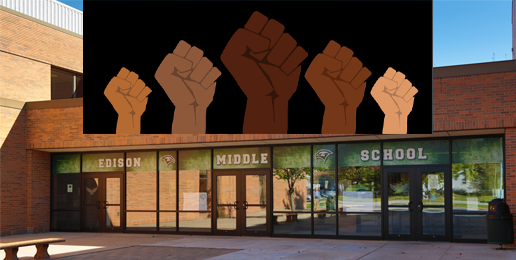 It appears the racism identified as “anti-racism” and being endorsed all across America is bearing rotten fruit at ever younger ages and in ever more perverse ways.

Just last week, administrators at Edison Middle School in Wheaton, Illinois allowed student members of the blacks-only “Panthers in Black” school club to lecture peers on the intricacies of using various forms of the “n”-word. Students learned who is permitted to use the “n”-word and which “n”-word suffix is appropriate in what context. Parents of students forced to listen to this non-voluntary lecture were not notified ahead of time or asked to sign a permission slip.

Eighteen slides were included in the lecture addressing topics like the importance of Black History Month. This slide was notable for its vagueness. The Panthers in Black advocate for “recognizing” and “promoting” appreciation of African American “achievement, culture, heritage, sacrifices, and accomplishments, including past and current events.” Several things are unclear.

Should those goals serve as pedagogical criteria for determining what is included and excluded in history classes?

Is “promoting appreciation” of one racial group even an appropriate goal for government schools?

Will the goal of “promoting appreciation” of African American achievement, culture, heritage, sacrifices, and accomplishments in the past and present determine what will be included and excluded in the limited time schools have to teach American and world history? For example, will greater achievements by non-blacks be jettisoned for lesser achievement by blacks?

When discussing the past history of blacks, will the sordid history of the involvement of Africans in enslaving other Africans be shared?

In the slide on the etiquette of using the “n”-word, the Panthers in Black shared the differences between the suffixes “er” and “a” when appended to the “n”-word. According to the Black Panthers, when blacks use the “n”-word with the “a” suffix among themselves, it’s a “term of endearment.” All other races are forbidden from using it.

The black Panthers claimed emphatically that,

But then they also acknowledge that although students “may listen to music or read books that have those two endings of the n-word, it is NOT OKAY to say if you are not African American.” So, do African Americans use the “er” ending or not?

The Panthers in Black moved on to establishing joke rules for all their middle school peers:

“joking around” about race is not a joke and it’s not okay.

The black Panthers say this means no jokes about “past events,” Black Lives Matter, slavery, skin tone differences, and George Floyd. Imagine if someone had issued this diktat to Richard Pryor. And imagine if Key and Peele, Chris Rock, and Eddie Murphy were prohibited by the censors among us from “joking around about race.”

Come to think of it, since all jokes center on some group or some behavior humans engage in, maybe we should ban all jokes.

Most important, since leftists continually appeal to hurt feelings to control what others say and do, shouldn’t there be discussions about the critical importance of free speech in a free society and the concomitant need to tolerate expressions of diverse ideas, some of which make us uncomfortable?

In the two slides about “Race,” the Panthers in Black focused on biracial identities, saying that it’s “not okay” to ask any questions about the race of biracial students’ parents. Ironically, this slide also says,

Race shouldn’t be a reason to treat anyone differently.

Isn’t that the whole point of their club and their lecture? Aren’t they treating whites different from blacks?

In two slides about hair, the black Panthers explained all the different hair styles blacks use to express themselves and how “big a part of the African American culture” hair is. But non-blacks are commanded by the Panthers not to ask any questions about this important part of their identities. Seems like a recommendation for cultural insensitivity to me.

The black Panthers also assert that it’s “offensive!” to ask Muslim girls if they’re hot wearing a hijab or why they’re wearing a dress in the summer. The Panthers don’t demonstrate much tolerance for the innocent curiosity of 11-year-olds.

The second to last slide was an invitation to African American students only to join the exclusive Panthers in Black club, assuring non-blacks that they are willing to talk to them.

The presentation concluded with a slide showing the Black Power raised fist accompanied by these words:

We appreciate you for listening to our presentation!

“Thanks” are not in order, since listening to their lecture was compulsory.

Yes, this is racism and it’s dividing a society that was moving steadily toward a more unified country until leftist ideas spawned in colleges and universities made their malignant way into every corner of America. And now the cancer is systemic.

Watch this video clip of a parent responding to the racist presentation at the District 200 School Board meeting. (H/T Break-Through Ideas):

If You Care About Children and America’s Future, Keep Your Kids Out of Public Schools
b
a
x
r