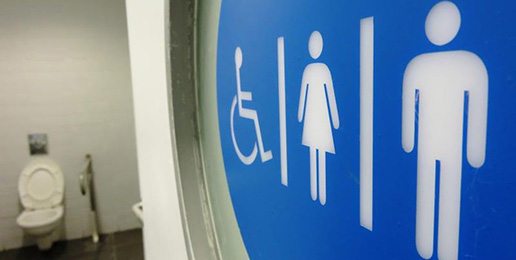 A disturbing article about a San Francisco elementary school illustrates that reality and points to the future of all our schools unless those who know better, do better.

Last September SFGate told the story of Miraloma Elementary School which is doing away with sex-separated restrooms, starting first with the lower grades and working their way up through the higher grades. As we all know, the younger the child, the easier the indoctrination.

Two of the children featured in this troubling story are the six-year-old Braverman twins, Ari and Ella. Ari is a boy who, according to the article, “doesn’t fit boy stereotypes.” According to his parents, “He wears boys and girls clothes and doesn’t discriminate between pink and blue toys.”

His mother, Sarah Mattison-Earls, offered more detail about his binary-shattering history: “He wore dresses for a couple of years and now…‘still rocks the gold lamé stretch pants.’”

Ari’s father, Gedalia Braverman, pontificated that “As parents, you eventually realize it’s not your job to change your child’s personality….It’s not my job to identify and pigeonhole my children’s genders, and certainly it’s not the school’s.”

What a sorry, diminished understanding of “personality” Mr. Braverman possesses.

If “personality” is merely the aggregate of a child’s untutored desires, and if it is not the job of parents to “change” their children’s “personality,” what precisely is a parent’s role?

Some might argue—if they could do so without risking the vitriol of the tolerant—that one part of a parent’s job is to help shape or direct their children’s desires, beliefs, values, and actions toward that which is good, true, and beautiful. More specific to the topic, it is the job of parents to help their children accept and view as good the sex in which their genes have pigeonholed them.

Ari’s twin sister Ella expressed her happiness about the gender-neutral restrooms: “If someone doesn’t refer [sic]to either gender, they might not be sure which bathroom to use….I think it’s nice because then people don’t have to be separated just to go into bathrooms.”

“Just” to go into bathrooms? How does a six-year-old arrive at the notion that separate bathrooms for people of different sexes is trivial? And if it is trivial, then why won’t gender-dysphoric boys, girls, men, and women use the bathroom that corresponds to their sex?

A six-year-old who discusses “gender” and expresses a preference for gender-neutral restrooms has obviously been inculcated with a set of assumptions about sex and “gender identity.” And it seems unlikely that Ella has been taught that physical embodiment (i.e., maleness and femaleness per se) is both immutable and profoundly meaningful.

Ari and Ella Braverman have a sad backstory that perhaps explains their precocious and perverse notions about maleness and femaleness.

Their father, Gedalia Braverman, is a 56-year-old single, HIV-positive, homosexual father who acquired the twins through a sperm donation from a friend who had leftover sperm from donating to a lesbian couple, and an egg donation from the niece of his best college buddy. This young woman was “in her 20s, the time in a woman’s life when the largest number of best quality eggs can be harvested. She also met Braverman’s criteria for health and intelligence.” Finally, Braverman had to rent a womb—a womb that the gestational surrogate ended up losing as a result of a difficult delivery of the twins Braverman wanted:

Braverman had dreamed not only of parenting, but of having multiple children. Having one pregnancy was costing him approximately $150,000. Not to mention the entire process takes about a year. For each additional pregnancy he would have to pay the amount and invest the time all over again.

He was starting the process at 48, and would be 49 when a child was born, if all went well. “I didn’t want to have another child at 51, 52. I also didn’t know whether I was going to get pregnant the first time,” he said. In some cases, if things don’t all go smoothly, it can take years to successfully conceive and carry a term. “So given that, I really wanted to have as many kids as possible, as quickly as possible, within reason.”

In their effort to mimic true marital relations whose natural end is children, those in naturally sterile unions (or as in Braverman’s case, in no union) resort to purchasing eggs and/or sperm, and when necessary renting wombs, thus turning children into commodities. Many of them believe their desire and extraordinary efforts to procure what they have no moral right to make them better parents than “breeders.”

What concerns those in intrinsically sterile sexual relationships (or in no relationship) less are the needs, rights, and desires of the children they acquire who will be hurt in numerous ways:

Homosexuals take umbrage at any suggestion that children ought not be placed with or purchased by homosexuals. They view good parenting as constituted solely by the capacity to love and provide for the needs of children. But such a claim raises the question: What are the needs of children?

If you think our work is worthy, would you please consider an end of the year tax deductible gift to support the work of the Illinois Family Institute?

Your support is directly helping us establish a strong and consistent presence in the public square — representing your voice, and your values — proudly pro-life, pro-marriage and pro-family.