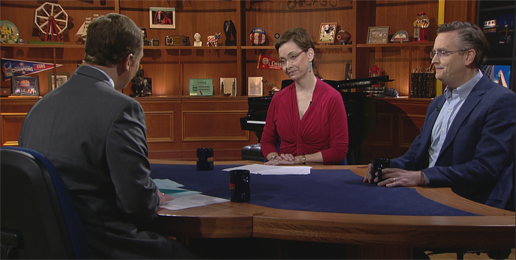 UPDATE: A Freedom of Information Request has revealed that the cost for speakers for New Trier’s All-School Seminar Day are almost $28,000, with $15,000 alone going to Colson Whitehead.

A closer look at the money spent and diversity ideology promoted—often through fallacious logic—may lead parents to do two things: 1. Keep their children home on “progressive” dogma day. 2. Pursue changes in future seminars with the doggedness and passion (if not the fallacious reasoning) of “progressives.”

On Feb. 19, the North Cook News reported that New Trier has paid almost $90,000 to notorious snake oil salesman Glenn Singleton and his Pacific Educational Group. Here’s a little anecdote about another affluent school district on Chicago’s North Shore that was similarly beguiled by the oily diversity scammer Singleton: District 113 which encompasses Deerfield and Highland Park high schools and which is where I first encountered the ethically-challenged Glenn Singleton. This is my former place of employment and the school from which all four of my children graduated.

Between spring 2007 and spring 2008, District 113, using both federal and district money, spent somewhere in the neighborhood of $83,000 to hire the San Francisco-based Glenn Singleton and representatives from his Pacific Educational Group to come  seven times to teach District 113 employees about their “whiteness.” This figure included Singleton’s fees, travel expenses, per diem, and costs of hiring substitute teachers for all the teachers who were absent from class to attend the all-day indoctrination seminars. The $83,000 included $10,000 for substitute teachers and $20,000 to feed everyone at the Highland Park Country Club where the meetings took place.

I asked then-superintendent George Fornero why we were hiring Singleton and was told it was due to Highland Park High School’s failure to make “adequate yearly progress” under the No Child Left Behind Act. The district had received federal money to help the Hispanic students perform better on standardized tests, and Fornero used it to hire Singleton. Both Singleton and his facilitators explicitly stated that neither he nor his book on which his consultations were based (Courageous Conversations) provide any solutions.

Every time Singleton or his representative came, every administrator, every department chair, two teachers from every department, and area (e.g., multi-media, custodial pool, technology, secretarial pool) from both high schools attended all-day meetings during which they discussed their “whiteness.” This meant that all the participating employees missed seven days of work or classes.

I asked the school board and administration how even in theory does having secretaries, custodians, and teachers miss school to talk about their “whiteness” at the Highland Park Country Club help minority students improve their test scores.

They offered no answer.

At the all-staff, all-faculty meeting to introduce District 113 to his “social justice” theories, Singleton made some surprising statements. He explained that many experts believe the causes for the underperformance of minority students are poverty, language issues, mobility, and lack of family support. He then made the startling claim that none of those factors is the cause. The causes, he claimed, are “institutional racism” and “whiteness.”

He went on to classify audience members into three categories according to their potential responses to his theories: The first group were those who would agree with him immediately. The second group were those who would be on the fence and need to be convinced. And the third group were “those who are gifted at subverting reform.” In other words, those who dare to suggest that limited English skills likely affect test scores are “gifted at subverting reform.” Singleton cunningly attempted to prevent dissent by pre-labeling pejoratively those who disagree with his theories.

Toward the end of the year, Singleton visited classrooms to evaluate the continued need for his services. He also visited the writing center where I had worked for eight years. After school, he met with the administration which included all department chairs to “debrief.” The next day, one department chair told me and two others confirmed that Singleton had called for me to be fired citing as justification the following quotes I had on my wall:

“Those who begin coercive elimination of dissent soon find themselves exterminating dissenters. Compulsory unification of opinion achieves only the unanimity of the graveyard.” (The Supreme Court of the United States, in West Virginia State Board of Education v. Barnette (1943)

Despite incessant repetition of the word ‘diversity’ in academe, the tragic fact is that the academic world is one of the most intolerant places in America when it comes to diversity of ideas” (Thomas Sowell, African American, Senior Fellow at Stanford University’s Hoover Institution).

“One is an individual, not an instance of blood or appearance. The assault on individual identity was essential to the horror and inhumanity of Jim Crow laws, of apartheid, and of the Nuremberg Race Laws. It is no less inhuman when undertaken by ‘diversity educators’” (Alan Kors, Professor of Intellectual History at University of Pennsylvania).

“‘[D]iversity’ — nowadays, the first refuge of intellectually disreputable impulses – [is] the . . . belief in identity politics and its tawdry corollary, the idea of categorical representation” (George Will, syndicated columnist).

Singleton also boasted in the meeting that he had gotten employees in other school districts fired. Two weeks later, I was demoted.

After spending thousands of dollars on Singleton’s doctrinaire and racist theories, Fornero, perhaps unintentionally, acknowledged precisely what District 113 got for their time and money in a 2009 letter to Secretary of Education Arne Duncan:

As was the case in the spring of 2008, our non-English speaking students were once again asked to demonstrate their academic abilities by taking the ACT and the WorkKey assessments in English. And once again, despite taking the test seriously and despite working for hours longer than other students to complete it, when these students receive their results next fall, they will all fail [emphasis added].

One would think that an admission like that would be the nail in the coffin of divisive, intellectually vacuous, ideologically-driven expenditures. But the public should never underestimate the fervor of true proselytes driven by political motives. They will continue to abuse their access to public money until community members publicly and vigorously oppose them.

Getting to the gist of the concerns of critics of Tuesday’s seminar is made challenging by the pervasive use  of fallacious arguments by “progressives” to obscure the critics’ arguments. Here’s a quick look at some of the fallacies New Trier “progressives” use:

1.)  Traitorous critic fallacy (an ad hominem fallacy):  Criticizing or dismissing an opponent’s argument by attributing it to some unfavored group rather than responding to the substance of the argument.

The use of this fallacy was on full and unabashed display by New Trier father Paul Traynor when he appeared recently on WTTW’s Chicago Tonight  ( a must watch segment for a lesson in fallacious reasoning) and dismissed the arguments of New Trier parents by suggesting these parents are somehow connected to Breitbart and IFI.  Traynor twice claimed IFI is a “hate group registered with the Southern Poverty Law Center” clearly suggesting that IFI is, in reality, a hate group. In addition, Traynor complained that “IFI—this hate group—has gone after me personally.”  What did IFI do to warrant his fear? I critiqued his public comments that he voluntarily provided to the Chicago Tribune. Instead of responding to the substance of the seminar critics’ arguments, Traynor attacked two organizations that have written about the controversy.

For example, seminar supporters have repeatedly called seminar critics “racists.” In addition, on Chicago Tonight, Traynor criticized the suggestion that Colonel Allen West or Sheriff David Clarke could be  invited to represent conservative ideas and criticized Dennis Prager as a member of the “alt right.” (Apparently, Traynor views invited “queer Latinx” speaker Monica Trinidad as a moderate—Trinidad who once “tweeted a picture of mounted police officers with the comment ‘Get them animals off those horses.’”)

So, when seminar supporters say things like “Racism exists,” “New Trier kids are sheltered,” “Colson Whitehead and Andrew Aydin [two of the invited speakers—both liberal Democrats] have won national book awards,” “Students may express dissenting views,” “New Trier is a great school,” “The seminar was carefully constructed,” or “Parents were included,” they are not responding to the central argument made by critics who justifiably see the seminar sessions as biased. All of these claims made by seminar supporters are true (well, most of them) but irrelevant to the arguments of seminar critics.

4.)  Appeal to popularity (argumentum ad populum, appeal to common belief, bandwagon fallacy): Expressing the idea that because a belief is popular or widely held it must be true.

Both seminar supporters and superintendent Linda Yonke employed this fallacy saying that most community members support the seminar as currently constituted. Whether or not such a claim is true is irrelevant.

Maybe, just maybe New Trier community members can wade through the flurry of fallacies to get seminar supporters to answer the only relevant question: Do you believe the sessions are relatively balanced between conservative and “progressive” views on race-related topics. If so, can you point to the resources used and speakers invited that represent conservative perspectives.