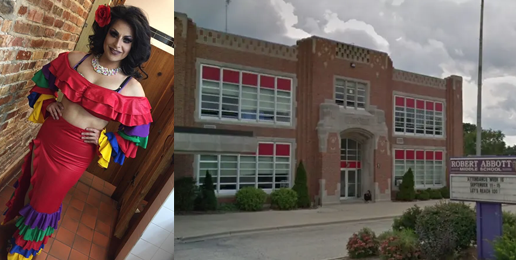 Cinco de Mayo was ruined at Robert Abbott Middle School in Waukegan, Illinois, the most God-forsaken state in the Midwest. It was ruined by the administration allowing the school’s openly homosexual “administrative assistant” who moonlights as a drag performer, Alfredo Isaac Zires, to sashay through the school in drag with another drag queen. What made the grotesque and inappropriate spectacle even worse was the cheering and applause from children, parents, and staff as the 39-year-old Zires strutted his stuff.

Yes, leftists are transing other people’s children using taxpayer funds. Homosexuals and cross-sex impersonators are using public schools to normalize homosexuality and cross-sex impersonation. Those who freely choose to place sexual deviance at the center of their identity want to transform the moral, social, political, and aesthetic views of minor children while censoring all dissenting views. 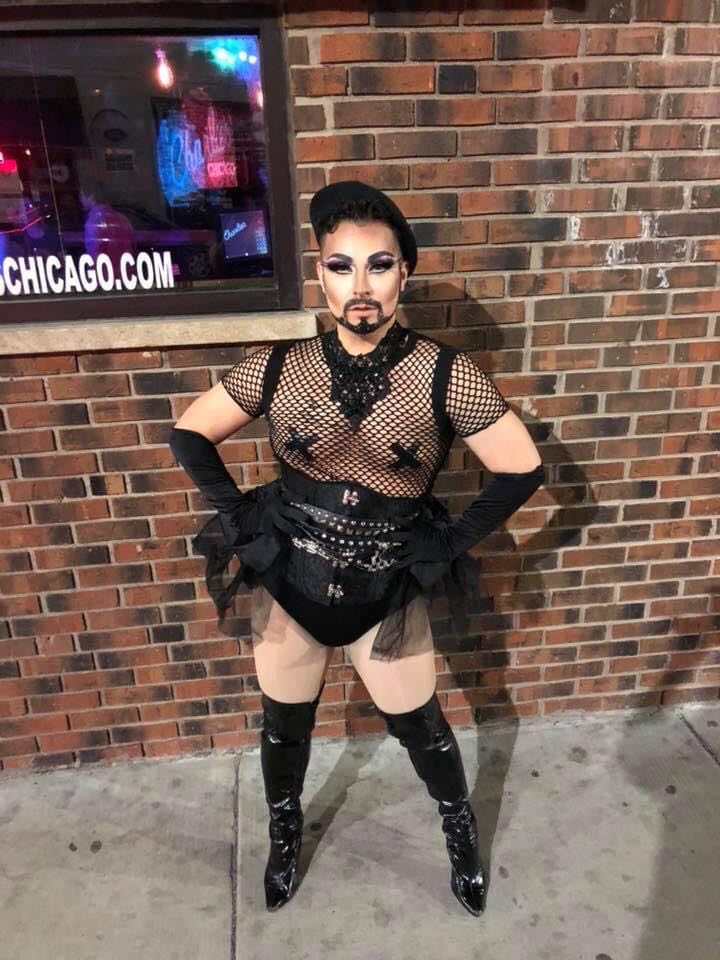 To critics of his school drag performance, Zires—whose drag persona is Lola Madison—offered an aggressively defensive retort on Facebook under yet another name, Alfredo Isaac. His retort lacks any regret or shame for violating parental trust and the innocence of children:

IM PROUD TO SAY IM ONE OF THE DRAG QUEENS IN THIS VIDEO! THIS HAS EVERYTHING TO DO WITH OUR MEXICAN CULTURE AS THERE ARE MANY LGBTQ+ PERSONS THAT ARE OF MEXICAN DESCENT. YOU EVER HEARD OF FRIDA KAHLO THE MEXICAN PAINTER? YEA WELL EDUCATE YOURSELF. SHE’S ONE OF THOSE PERSONS. Y’all so worried about this exposure when the children in general are exposed to much worse. … What we did was share art amongst the future of this wonderful city that I’ve had the privilege of living in practically all my life. Drag is nothing new and what we performed was appropriate for this special occasion.  … I mean if we didn’t ruffle any feathers are we even doing drag. You don’t even know history was made before your eyes and we’re not going anywhere. I should prepare for their next event perhaps. … Jesus loves us too!!! Xoxo May the lash be with you. Lola Madison

Zires admits to wanting to “ruffle feathers” and make history. His performance had nothing to do with Cinco de Mayo, and everything to do with using children for his social and political purposes.

Zires/Madison is right that Jesus loves those whose sin is homoeroticism and cross-dressing. But Jesus does not love homoeroticism and cross-dressing. Jesus loves adulterers, drunks, thieves, gossips, slanderers, zoophiles, and the incestuous. He does not love adultery, drunkenness, thievery, gossip, slander, bestiality or incest. He doesn’t love sin even if sinners affirm sin as central to their identity. Jesus detests sin.

Zires made the foolish and cliché claim that because some children are “exposed to much worse,” no one should worry about him exposing them to drag performances. Is that what the mission of public schools has become? Is the mission of school leaders to expose children to any phenomena that exists as long as it’s not as bad as the worst they many encounter? Many parents assume schools should aspire to expose children to that which is good and true and beautiful—not that which is dark, disordered, and deviant. Should schools mirror and affirm the worst in life or help children know and aspire to the best?

Americans who have been paying attention know that the mission of leftists for government schools is, indeed, dark, disordered, deviant, and scarily presumptuous. They want to appropriate the hearts and minds of other people’s children, especially the children of conservatives.

We’ve learned that schools facilitate “social transitioning” in children who have been groomed to interpret the confusion and discomfort they experience around sexual identity as signs they are “transgender.”

We’ve learned that schools conceal from parents their collaboration with “trans”-cultism.

We’ve learned teachers select obscene pro-perversion materials to teach and/or recommend to students—materials that can’t be published in newspapers or read at school board meetings.

We learned that public schools are paying to add tampon machines to all boys’ bathrooms. Remember, symbols matter because symbols teach.

We’ve learned that laws have been passed and task forces created that require leftist beliefs about homoeroticism and cross-sex impersonation to be taught and affirmed to children starting in kindergarten. Leftists want to teach children about the accomplishments of homosexuals and cross-dressers because they understand the immature mind. Leftists understand that associating intelligence, creativity, compassion, or perseverance with sexual deviance will transform young malleable minds. It will lead children to view homosexuality and cross-dressing positively.

We’ve learned that queer adults believe drag performances are suitable entertainment for children of any age.

All this should be shocking, but many conservatives have become the proverbial frogs boiling alive along with their children. And many conservatives—both parents and teachers—who have retained the capacity to be shocked are too cowardly to say or do anything even to protect children. Why teach our children about heroes and martyrs if we have no intention of sacrificing anything even for a cause as critical as this?

And now America’s daft Big Brother is redefining the word “sex” in both Title IX of the Education Amendments of 1972 and Title VII of the Civil Rights Act of 1964. “Sex,” which had and has a clear unambiguous meaning, will, by executive fiat, be redefined to include “sexual orientation” and “gender identity.”

This is being done to override all state laws that prohibit minors from being guinea pigs in a vast leftwing experiment to trans-sexualize (and profit from) the bodies, minds, and hearts of children. And it’s  being done to eradicate sex-based private spaces and destroy girls’ sports. If Biden can’t kill children in the womb, he’ll use schools to harm them grievously:

The Department [of Education] plans to propose to amend its regulations implementing Title IX of the Education Amendments of 1972, 20 U.S.C. 1681 et seq., consistent with the priorities of the Biden-Harris Administration. These priorities include those set forth in Executive Order 13988 on Preventing and Combating Discrimination on the Basis of Gender Identity or Sexual Orientation and Executive Order 14021 on Guaranteeing an Educational Environment Free from Discrimination on the Basis of Sex, Including Sexual Orientation and Gender Identity.

The amendments to the Department of Education’s regulations regarding the implementation of Title IX are expected to be released any day.

Goodbye single sex restrooms and locker rooms in all schools that receive federal funds. As leftist propaganda on sexuality spreads like flesh-eating bacteria and increasing numbers of children identify as “trans,” “non-binary,” and “gender-fluid,” school bathrooms will be co-ed. I don’t know what schools will do when our troubled youth start identifying as “nullos.” I guess we’ll just have to wait and see.