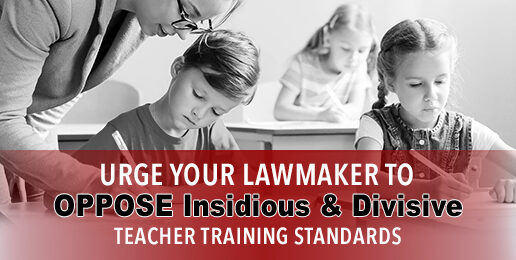 An Illinois State Board of Education committee has bypassed the legislative process with an amendment that will incorporate Identity Politics, BLM, Critical Race Theory and The 1619 Project into teacher training standards and eventually Illinois public school classrooms.

Identity Politics at its core is Marxist, dividing humanity into the oppressors and those who are being oppressed.

Black Lives Matter (BLM) is an extreme leftist Marxist organization that is trying to destroy American ideals. They are also behind the movement to defund police.

Critical Race Theory implies that ALL people who were born with white skin are racist.  And that all whites have power because of their skin color and have used that power to hold back people of color. This is patently false.

The 1619 Project is an insidious attempt to rewrite history with an anti-American sentiment. The 1619 Project falsely claims that the Revolutionary War was fought to maintain slavery. Furthermore, it falsely claims that America was founded in 1619 when the first slaves were brought to our shores. The truth is that colonists broke free of England’s restrictive monarchy to form an independent republic that recognized our God-given civil liberties.

In an excruciatingly detailed 2,400- word document, leftists laid bare the comprehensive nature of the indoctrination they seek to mandate. These “standards” will apply to all teachers, administrators, school counselors, school psychologists, school social workers, school nurses, and speech language pathologists.

This is how garbage gets into our children’s classrooms: It starts by either leftist professors in education departments, or state boards of education committees, or in state legislatures using their positions to advance their ideological beliefs. Tax dollars should not be used to foster lies, division and hatred.

TAKE ACTION: It is vital that the members of the Joint Committee on Administrative Rules (JCAR) hear from all Illinois taxpayers before the committee meets to vote on this proposal in February. Please click HERE to send a message to this committee urging them to vote against any proposal that would mandate left-leaning standards for educators in Illinois public schools.