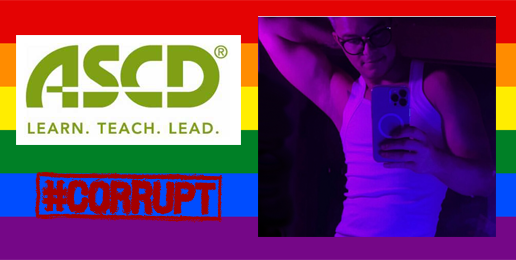 The government school system—paid for by taxpayers—has been so corrupted by the depravity of leftists that schools are unfit for children.

The Illinois Chapter of the Association for the Supervision of Curriculum Development (ASCD) is sponsoring its annual Pre-K and Kindergarten Conference next week in Schaumburg, Illinois. One of their scheduled speakers was Tell Williams IV, an openly homosexual, faux-married pre-K teacher at a private school in a Philadelphia suburb. According to Real Time Michiana, in between preparing his lessons for preschoolers, Williams posts pornographic videos of himself on the adults-only, subscription website Only Fans. Real Time Michiana reports,

Me f*cking my toy

Me f*cking my *ss with a d*ldo

Me j*rking off in my spider-man costume [asterisks added]

Williams was scheduled to talk about “Self-Care and Humanizing Educators”:

Mr. Williams will be discussing what real and effective self-care items look like, how we can better advocate for ourselves and our colleagues both in and out of the classroom, and ways we can help normalize and humanize teachers.

First, what does “normalize teachers” even mean?

In his bio for the conference, ACSD makes explicit Williams’ goal to use education to promote his depraved views on sexuality. Of course, ACSD uses all the au courant euphemisms:

After teaching years of preschool, Tell saw a gap in curriculum that covers lessons on tolerance, acceptance, and diversity. Because of this he created his own library that helps aide [sic] him and other educators on discussing these important matters in and out of the classroom. … Tell travels and does speaking engagements at schools and conferences on humanizing teachers both inside and out of the classroom, as well as focusing on self-care for educators.

Are they urging tolerance and acceptance of all diverse views of homoerotic desire, homoerotic acts, and cross-sex identification?

Are they urging tolerance and acceptance of the views of parents who don’t believe their pre-K through high school kids should be introduced to leftist beliefs about homosexuality and cross-sex identification by public school teachers?

Or are they urging “tolerance” and “acceptance”—with both words meaning approval—of only leftist views of homosexuality and cross-sex identification, in which case they’re not really interested in diversity?

And should preschool curricula include any material pertaining to the sexuality issues that obsess leftists?

No amount of scrubbing can erase the question: Why was Williams invited in the first place?

He wasn’t the only homosexual man invited by the Illinois ACSD, which has “over 2,000 members statewide comprised of superintendents, central office administrators, principals and assistant principals, department heads, teachers, university personnel, state agency personnel, and others.” Of the eight men invited—including Williams—three are homosexual: Williams, Matt Halpern, and Greg Smedley-Warren (also faux-married). So, an oddly disproportionate 37 percent of the men invited are homosexual.

The invitation to Tell Williams IV illuminates the corruption in public schools. Their moral guideposts—if any—are arbitrary and fluid. And homosexual teachers, of which there are many in public schools, can never be role models for children. Such teachers are, by word and example, normalizing egregious sin.