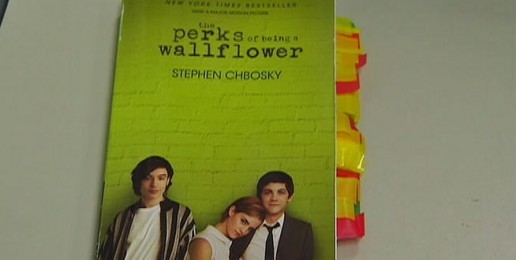 On June 10, the Hadley Middle School Board of Education in Glen Ellyn reversed its prior decision to exclude the obscene and sexually graphic The Perks of Being a Wallflower from its independent reading program. This second vote was 6-1 in favor of retaining the book, with the lone wise and courageous opposing vote coming from school board president, Sam Black.

One aspect of the controversy that has received too little press are the actions of teachers who exploited their positions and power in the classroom to promote their views with little regard for how their political activity would affect students. It has been reported that the three teachers who spoke at prior school board meetings in favor of Perks and who expressed their views on the community controversy in class, Tina Booth,  Lynn Bruno, and Ali Tannenbaum, also  wore paraphernalia  with messages about  book banning or “FREADOM” during school activities.

There are far too many political activists/ “agents of change” masquerading as “educators” in American classrooms. They rely on their anonymity and autonomy to use their publicly subsidized positions to try to shape the moral and political views of other people’s children. They do it through curricula, through supplementary resources that are never reviewed by department chairs or curriculum review committees, and through their classroom comments and actions of which parents remain largely unaware. Community members should demand that school boards create policy to stop these abuses of power on the parts of teachers—most of whom hold “progressive” views.

Ever in thrall to celebrity, some students asked author Judy Blume to make a statement in opposition to “book banning.” Apparently, Blume’s status as celebrated author makes her an expert on educational philosophy, the use of public resources, the First Amendment, psychology, sociology, and ethics—all of which are relevant to this discussion. (What’s curious is that when IFI writes about a school issue, encouraging taxpayers to contact school board members, the press often describes IFI as an “outside” organization in an apparent attempt to delegitimize our efforts. I have yet to see any articles in which Florida-based author Blume is described as an “outsider.”)

These students  also wrote to Hollywood  actor and activist Anne Hathaway who promotes the normalization of homosexuality because her brother is homosexual; Chris Colfer, homosexual actor on dissolute teen television show Glee; and Logan Lerman one of the stars of The Perks of Being a Wallflower film. Perhaps they chose Hathaway and Colfer because these Hadley students understand that one of the goals of Perks is to normalize homosexuality.

The school board believes that as long as parents have the right to decide whether their child reads Perks, it’s legitimate to spend public funds to purchase and include it in the independent reading curriculum. This “solution” to the controversy ignores three critical questions:

Conservatives need to be as tenacious in pursuing sound school policy as “progressives” are in undermining it. It should be unthinkable that any public school would have this book in its library or that any teacher would permit students to choose it for a class project. We have allowed the culture to desensitize us to vulgarity and perversion. We have allowed the ridicule of the “cool” people to silence us. And we have allowed the rationalization that minor concessions to an obscene culture and Leftist teachers are unimportant.

When in doubt about the wisdom, reasonableness, or truth of your position on a controversial issue, look to see who is on the other side. You should feel reassured that you’re on the right side when you see that most Hollywood actors and Neuqua Valley High School math teacher Hemant Mehta* (aka “The Friendly Atheist”) are on the other side.

*Click here and here to learn more about Neuqua Valley math teacher Hemant Mehta who has written on the Hadley controversy and oh so much more.