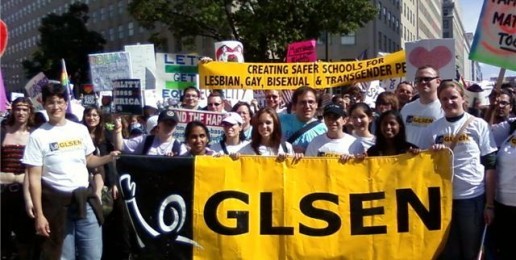 There’s yet more troubling information about H.R. 2262, the proposed amendment to the Safe and Drug-FreeSchools and Communities Act. According to the pro-homosexual website Change.org, “H.R. 2262 would require schools that receive Safe and Drug-Free Schools and Communities Act funding to implement comprehensive anti-bullying policies that enumerate categories often targeted by bullies, including. . .sexual orientation [and] gender identity/expression.”

Change.org is saying that if passed, H.R.2262 would mandate that schools that already receive funding for drug prevention education would either have to include homosexuality, cross-dressing, and “transsexuality” or lose federal funding for their drug prevention programs. And this would apply not just to high schools but to elementary schools as well.

Furthermore, H.R. 2262 would require states that currently receive federal funding for programs to prevent drug use and violence to use funds for the collection of information on “the perception of students regarding their school environment, including with respect to the prevalence and seriousness of incidents of bullying and harassment and the responsiveness of the school to those incidents” (emphasis added).

In H.R. 2262, harassment is defined as conduct that “adversely affects the ability of one or more students to. . .benefit from the school’s educational programs or activities because the conduct, as reasonably perceived by the student (or students), is . . . persistent or pervasive; and includes conduct that is based on a student’s actual or perceived sex, sexual orientation, or gender identity.”

So, if H.R. 2262 is passed, federal money will be used to poll teenagers on their perception of the prevalence and seriousness of harassment. And the harassing conduct need only be conduct that one teenager perceives as persistent and pervasive.

In addition, “authorized activities” will “teach students about the consequences of bullying and harassment.” One can reasonably assume that schools will not be able to teach about the consequences of harassing conduct toward peers based on actual or perceived sex, sexual orientation, or gender identity without explaining precisely what is meant by perceived sex, sexual orientation, or gender identity. And remember, H.R.2262 will apply even to elementary schools.

H.R.2262, “The Safe Schools Improvement Act,” was introduced on May 5, 2009. Then exactly two weeks later, on May 19, Secretary of Education Arne Duncan issued a press release announcing that he had appointed homosexual activist and founder of the Gay, Lesbian and Straight Education Network (GLSEN), Kevin Jennings, as the new Assistant Deputy Secretary for the Office of Safe & Drug Free Schools.

Kevin Jennings, GLSEN, and Change.org believe that homosexuality is an ontological condition analogous to race rather than a condition defined by subjective feelings and volitional sexual acts. Those who believe in the legitimacy of including explicit mention of homosexuality in anti-bullying curricula need to ask whether they believe that other conditions defined by subjective feelings and volitional acts should also be included. Wherever homosexuality is mentioned in these curricula, let’s replace the term with aggression, or promiscuity, or polyamory, or selfishness–all conditions that are driven by powerful feelings that are not chosen and which often emerge very early in life. After all, aggressive, promiscuous, polyamorous, and selfish students ought not be bullied either.

This exercise reveals that these anti-bullying curricula go much further than merely ending bullying acts. They seek to end bullying by normalizing homosexuality. They seek to deracinate the belief that homosexuality is immoral. And this is why homosexualists seek to expose our youngest children to their dangerous ideas. It’s not that there is a problem with kindergarteners bullying homosexual classmates. Rather, homosexualists seek to expose kindergartners to pro-homosexual ideas and images because it’s easier to indoctrinate five-year-olds than seventeen-year-olds.