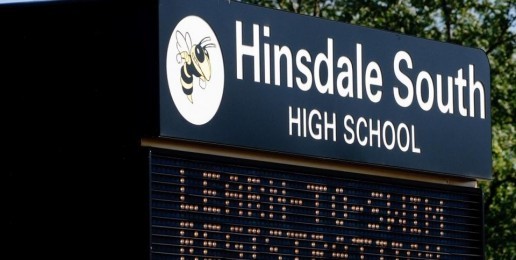 Just to remind readers, American Beauty is the story of a depressed middle-aged man Lester, played by Kevin Spacey, who becomes infatuated with his 16 year-old daughter’s best friend about whom he entertains sexual fantasies and with whom he flirts. His equally miserable wife played by Annette Bening has an affair.  A secondary story line involves a brutal conservative ex-Marine neighbor who is a closeted homosexual and ultimately murders Lester.

There are a number of questions that school administrators and board members should be asking. While this dark film critiques America, might it also cultivate dark and prurient thoughts in viewers? Might the sexual imagery be sexually arousing to some of Wimsatt’s students? Might the depiction of the neighbor reinforce the stereotype of conservatives as vicious hatemongers? Are subsequent classroom discussions sufficient to mitigate the damage done by the powerful narrative and images?

The other controversial film selected by Wimsatt is Brokeback Mountain, the story of two men who are hired by a rancher to herd his sheep and in the process become enmeshed in a sexual and emotional relationship that lasts for years, including through the dissolution of both of their marriages.

Click here and here to read two short lists of some of the offensive images in these films (warning: descriptions are graphic). As you’re reading the list of images from Brokeback Mountain, you should know that Wimsatt, describes these images as “tasteful.”

Here is Wimsatt’s justification for choosing these two films:

The primary objective in viewing Brokeback Mountain is to evaluate the film from the perspective of the text as an adaptation. In fact, one of the three Oscars it won was for “Best Writing & Adapted Screenplay.” The Annie Proulx short story, originally published in the New Yorker, is quality writing, and both the story and the film are texts that most of the students have not encountered. I like the film particularly because it was originally a short story (as opposed to a novel), thus the process of adaptation posed more of a challenge. I think the class will have a lot to discuss with this one. The prose is challenging, but the film is a good “payoff” for them in terms of viewing, particularly because it has such a good star appeal at this point in our culture.

The sexual element, while provocative, is tasteful. Naturally, we will discuss the standard literary elements of plot, theme, symbolism, etc., but again, the primary focus is on how the film holds up to (or surpasses) the original script….

I have given a lot of thought to these selections and, after consulting with colleagues and my department chair, have chosen a few that do contain more difficult material…. The sexual aspects of the film do not necessarily “advance the teaching of adapting text,” but they are nonetheless an integral part of what is, overall, a valuable and powerful story (as are so many rated R films!)…. I have often contended that when students consume films of a more graphic nature in a safe and structured classroom environment, they have an opportunity to process the content in a more thoughtful way, as opposed to a point in his life when he is more likely to watch it alone or with friends and not be able to have mature conversations about it.

Ah, yes, the ever utilitarian appeal to plot, theme, and symbolism. As I’ve written before, the beauty of teaching literature is that text-selection criteria are almost infinitely elastic. Literature and film teachers can find “reasons” to justify selecting virtually any film, play, novel, or essay they want to teach. After all, what text can be found that has no theme, no plot, no characterization, no dialogue, no setting, no symbols, and no figurative language? In other words, with the breadth of reasons available, teachers can justify teaching anything their little hearts desire. And if challenged, they simply assume that the reasons offered by critics are subordinate to their reasons for teaching it.

So, let’s look more closely at the reasons Wimsatt offers for her film choices because they echo the reasons proffered by English teachers all over the country for their inappropriate text selections:

Roughly 6,000 film industry voters, most in the Los Angeles area, many living cloistered lives behind wrought-iron gates or in deluxe rest-homes, out of touch not only with the shifting larger culture and the yeasty ferment that is America these days, but also out of touch with their own segregated city, decide which films are good.

As usual, parents who are troubled by these films have been offered the inadequate option of having their children receive an alternative assignment during the time the class will be viewing and discussing the inappropriate films. This, obviously, results in an isolated, diminished academic experience. Or they can drop the class entirely.

Here’s a wacky idea: Why not drop both films and replace them with films that will challenge students intellectually, broaden their aesthetic lens, and respect the values and beliefs of all students and parents.

Take ACTION:  If you object to the decision to teach these two films in a publicly funded school, please click HERE to respectfully express your views to the school superintendent, Dr. Nicholas D. Wahl, and the members of the local Board of Education.  And if you know someone in the Hinsdale South community, please share this information with them. If we do nothing, the texts chosen by public teachers only get worse.