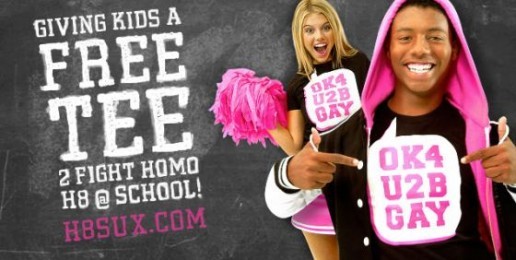 Last week, IFI published a press release that was sent to us by Luke Montgomery announcing yet another campaign to use public schools to promote acceptance of homosexuality. The campaign is the creation of his organization, H8SUX, which previously exploited young children by having them use the F-word in a video campaign to promote affirmation of perversion.

I try to respond to as many emails as possible, even from those with whom IFI disagrees. I rarely publish my responses and had no intention of doing so when I responded to Mr. Montgomery, the founder of H8SUX . Subsequently, I thought it might be helpful to others who may find themselves falsely accused of hating those who identify as homosexual.

One point I regret not including in my email was a response to a claim made in the H8SUX press release. The press release made the astonishing claim that “Kids are born gay, lesbian, bi and trans.”  There is no research proving such a claim, and for Mr. Montgomery to assert that as fact is not only dishonest and irresponsible, it is destructive.

Here is the email I sent Mr. Montgomery:

I just read your bio, and your story is really a terrible and sad story.

What troubles me about homosexual activists and their ideological allies is that they, like you, conflate moral propositions about behavior with hate. In so doing, you actually cultivate hatred and diminish the possibility of both discourse and relationships with people who believe differently than you do.

I worked in a public high school writing center for eight years, until the summer of 2008. Some of my tutors identified as homosexual, and all four of my children have had friends who identify as homosexual. Their friends’ same-sex attraction and embrace of a homosexual identity had no effect on my respect for them as human beings, my appreciation of their gifts and positive characteristics, or the delight I took in their company. They knew I cared about them and enjoyed their company. I don’t agree with them on the nature and morality of homosexuality, but we had a world of other topics to talk and laugh about.

I think their understanding of what homosexuality is ontologically is completely in error, but I’m sure they think my ontological views are in error. I think their views of the morality of volitional homosexual acts are in error; they think mine are in error. That’s what happens in a diverse world. My belief that volitional homosexual acts are not moral does not constitute hatred of those who engage in them. I don’t believe polyamorous acts are moral either, and yet I don’t hate those who identify as polyamorous.

I have never felt hatred toward those who identify as homosexual, spoken hatefully to anyone, or treated anyone uncivilly. Those on your side will argue that expressing the view that homosexual acts are immoral is inherently uncivil or disrespectful or hateful, but they don’t apply that principle consistently. They don’t argue that their expressions of moral disapproval of volitional acts constitute incivility, disrespect, or hatred.

The truth is that it’s entirely possible to deeply love and enjoy the company of people with whom we profoundly disagree on questions of belief and morality. People do it all the time.

Are there people who actually hate those who identify as homosexual? Yes, but I don’t know a single one. I know of Fred Phelps and his family, but I don’t personally know a single person who hates homosexuals, even though I know many who believe homosexual acts are not moral acts. And I know many people who believe like I do who would defend at great personal cost someone who was being assaulted by bigots.

If my belief, and the belief of some of the finest scholars working in the most prestigious academic institutions around the world (including Princeton, Yale, and Oxford), are true that homosexual acts are not moral acts, then saying so can’t be hateful. You may reject a belief in God and an afterlife, but I believe in both. Further I believe that the best exegesis shows that God loves all of his creation, but not all of our desires and acts. And among the acts He hates are homosexual acts, which He says will cost us eternal life. I know you must reject everything I’ve just said, but you know it’s what I believe. What would it mean if I told you I didn’t care what happens to you after death? Would that not be the ultimate hateful act?

I would urge you to be more circumspect in your assumptions and your statements about hatred. I’ve experienced the kind of virulent hatred that rhetoric like yours is generating among young people.

If you’d ever like to talk, please don’t hesitate to call or email me. And if you’re ever in the Chicago area, I’d love to meet with you.