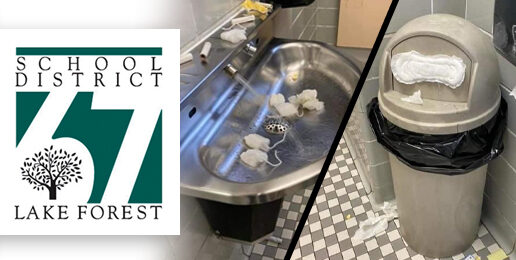 If you need evidence that Illinois lawmakers have plumbed the depth of idiocy and that public schools are no longer fit places for boys or girls, look no further than Deerpath Middle School in the North Shore’s tony suburb of Lake Forest where the boys’ bathrooms are now equipped with free feminine hygiene products. And folks, you paid for them.

What’s worse, leftist lawmakers concocted the bill that Governor J. B. Pritzker signed into law that requires every boys’ bathroom in every Illinois public school that serves grades 4 on up to provide free feminine hygiene products—at taxpayer expense. This insult to decency, science, common sense, and stewardship of public money is an expensive sop to the “trans” cult before whom the left grovels.

Because leftists have no fixed moral compass and, therefore, no timeless principles to which they remain tethered, feelings, nothing more than feelings are their polestar. But not everyone’s feelings matter. Only the feelings of those whose sexual identity and sexual drive are disordered, anarchical, and subversive matter.

And that’s why hardworking Illinoisans now pay to provide free tampons and sanitary pads in all boys’ bathrooms in all elementary, middle, and high schools in Illinois.

Boys who attend Deerpath Middle School, which serves children in fifth through eighth grade, recently reacted as anyone over the age of eight would expect them to respond to such idiocy. They “used” sanitary pads and tampons in the only way young boys can, sticking pads hither and thither, and performing science experiments on the absorption capacity of tampons.

Since many leftist re-educators/change agents heartily endorse student activism, they should be pleased with this student protest of adult inanity. Give those boys an A for activism, effort, creativity, and wisdom. Okay, fine, deduct a point for mischief: A-.

Putting feminine products in all boys’ bathrooms in Illinois public schools is not merely a colossal waste of money. The far greater problems are that such a venture depends on prior acceptance of “trans”-cultic assumptions, and that it promulgates those assumptions.

This bathroom practice depends on accepting the leftist understanding of “gender identity” as true and accepting that dissenting beliefs are false.

This bathroom practice depends on accepting the idea that a girl’s subjective belief that she is a boy trapped in a girl’s body should determine bathroom usage rather than her biological sex determining bathroom usage.

This practice depends on accepting the belief that feelings of modesty and the desire for privacy when engaged in private bodily functions has no inherent and necessary connection to sexed bodies.

Moreover, this revolutionary practice now teaches every child in Deerpath Middle School that the preceding “trans” cultic assumptions are true and endorsed by the school.

This practice teaches that biological sex has no meaning relative to privacy.

It teaches that to be just and compassionate, boys (and girls) must relinquish their privacy. They must be willing to share bathrooms with persons of the opposite sex.

Parents and other taxpayers should not be surprised at this partisan-driven waste of scarce tax dollars. IFI warned about this idiotic bill when it was proposed and when it passed, and IFI even provided a peek at the risible “floor debate” prior to the bill’s passage.

Where are the courageous, principled school leaders willing to say, “No, we will not sexually integrate the private spaces of children and teens”? “We will not introduce socially constructed, leftist ‘gender’ theory to children and teens or implement policies based on such an arguable theory. We will not sexually integrate single-sex sports. We will not force our teachers to refer to students by pronouns that do not correspond to biological sex, and we will not force teachers to ask students for their pronouns. Rather, teachers will be required to use pronouns that correspond to biological reality.”

And where are the school boards that will stand behind such principled positions? If a district in as wealthy a community as Lake Forest will not stand for truth and be willing to risk the lawsuits that Lambda Legal and the ACLU will surely bring, then there are no limits to what our sanctimonious, presumptuous leftist activists in Springfield will do.