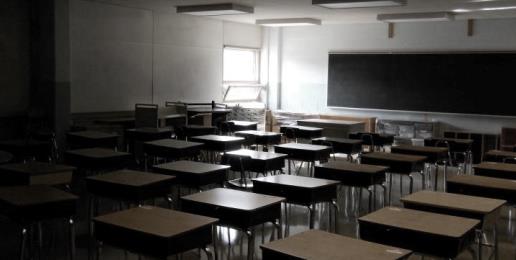 Providence College English professor, Anthony Esolen, has done it again. He’s written another must-read piece, this time an impassioned plea to Christian parents to pull their children out of public schools.

Esolen importunes parents to fulfill our God-given obligation to train up our children in the way they should go, which means removing our children from what Esolen describes as the “poisonous fog” of public schools where “pornogogues” hold our children’s minds in their depraved ideological grip.

The fact that we continue to place our most precious gifts in toxic public schools for seven hours a day, five days a week for their most crucial formative years is testament to our own lack of wisdom.

For several decades, there have been a relatively small number of Christians warning the church about the cultural degradation and oppression that is coming, and most Christians sashayed on about their worldly business with at best a momentary furrowed brow and at worst  embarrassment to be associated with contemporary prophets and embrace of worldly beliefs.

The intellectual laziness, selfishness, pride, ignorance, and cowardice of many Christians have coalesced into an anemic, effete faith. We are women and men without chests or spines. We practice a faith fed by watered down milk and then send our children to public schools that feed them tainted crumbs. And then we wonder why our youth are rejecting biblical orthodoxy in large numbers.

No more sashaying, people. No more private brow-furrowing. And definitely relinquish your profligate embrace of the harlot.

Christians need to wake up now. We need to pull our kids out of public schools, and churches need to help make this possible.

Here’s your splash of cold water from the inestimable Anthony Esolen:

Readers of LifeSiteNews are aware of the lawsuit brought by Dr. Steve Tourloukis of Hamilton, Ontario, against the Hamilton-Wentworth school board. He is a devout member of the Orthodox Church, and he wants to be told when the school plans to introduce to his children sexual material that he finds objectionable. The school board does not want to yield. They are standing on principles, such as those are. They believe they are “co-parents,” and that “children have a right to an inclusive education,” which means, simply, they have a “right” to be educated into complete sexual indifference and chaos. For the inclusivity is notably rigid and uniform.

We should step back from the specifics of this case to consider just what is going on, and what we should do about it.

Suppose your child returns from visiting his friend next door, and tells you that the father has been showing the boys some interesting films involving, well, boys and girls doing things. What do you do? You call the police. If Mr. Pornogogue the neighbor says, “I believe that we are all co-parents of one another’s children,” and “Every child has a right to a full view of human sexuality,” I doubt that his sententiousness would hold up in court. You might express your rebuttal against his teeth, in the form of a firm fist and knuckles. But here is what you would not do. You would not say, “Mr. Pornogogue, whenever you are going to show those films again, I want you to give me a call beforehand, so that I can make sure that Timmy stays home.”

I mean no disrespect for Dr. Tourloukis, but the point is that the pornogogue is going to do what the pornogogue is going to do. Yes, we should do all we can to palliate conditions in the open sewer; but the main thing is to get out of the sewer. Anyone who desires to subject children to a sexually charged curriculum, from kindergarten through grade twelve, is a pornogogue – maybe a nice pornogogue, a deluded pornogogue, a daft pornogogue – and that person with a depraved imagination is going to do what he or she is going to do. Supposing you could make sure that your child is absent for the five days on the year when the offenses are most rank and smell to heaven. What about all the other days? You are leaving your child’s mind and imagination in the care of someone depraved, in the old sense of that word: bent, crooked, out of kilter. Do you really believe that the stories the teacher chooses, the things the teacher talks about, the casual remarks the teacher makes, the coloring that the teacher gives to Christianity and Christendom, will not be crooked likewise?

Or, suppose you are dealing with a panel of politicians who want to require all children, whether their parents like it or not, to spend one day a year talking to pimps and harlots. Sure, you should labor to exempt as many children as possible from the requirement. But the real problem is that you have such a panel of rogues to begin with. If they say, “We are co-parents, we will determine what is best for your child,” then you have a panel of rogues with a taste for tyranny too – boundless in their assumption of authority. You are no longer the employer of your children’s teachers. You are the serf on the manor, and if you don’t want trouble you will keep your mouth shut.

Someone will have to palliate the harm that the panel does. But once you have arrived at such a pass, it is time to face facts. The thing as a whole is irremediable. You are not going to get anything but harm from Mr. Pornogogue, even if you win a small battle once in a while. You are not going to wrest sanity for children from the totalitarians…. If you have school boards celebrating fornication and sodomy and all the rest of the sexual chaos, you are dealing with something far more brutish than the pagan schools of old. The schools are pagan and worse than pagan. The mildew has penetrated clean through. The termites have chewed the studs into sawdust. The hollow walls are filled with rats’ nests.

It is time to get out.

Do not believe that you’ll save your children by talking to them occasionally at home. A few gulps of good air will not undo the harm of a whole day of poisonous fog. Their classmates, their teachers, their textbooks, the banners on the school’s walls, and the daily announcements will all be against you.

So it’s long past time when people who believe in the holiness of sexuality, marriage, and human life should build new schools, a hundred a year. Yes, it is expensive. But there’s no alternative.

Christians, be courageous and creative. Use church funds and facilities to create schools for those who aren’t able to homeschool. Entreat your members, including retirees, to volunteer their time, knowledge, skills, and wisdom in the establishment of schools dedicated to training up women and men with chests and spines who honor God in word and deed.

As you think more deeply about education, remember that our public schools undermine the capacity of children to think rationally. Instead they teach children to feel sympathy for sin and embarrassment of holiness. Public school teachers hold the one true God in disdain and teach children to worship the self. And then remember that Paul taught the Corinthians to “destroy arguments and every lofty opinion raised against the knowledge of God, and take every thought captive to obey Christ.”