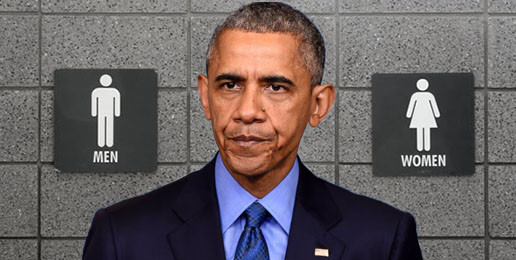 “By the pricking of my thumbs, Something wicked this way comes.”

The Obama Administration in yet another demonstration of its infinite hubris and, yes, wickedness has sent a joint “Dear Colleague” letter from the Department of Justice (DOJ) and the Department of Education (ED) to all public elementary, middle, and high schools and universities ordering them to allow gender-dysphoric students to use opposite-sex restrooms—and more—or risk loss of federal funds. The DOJ and ED describe the letter as “significant guidance” (emphasis theirs). “Significant guidance” is Newspeak for “Imperial Command.”

The Department of Education issued a similar diktat to public schools in 2014 through another “Dear Colleague” letter, telling them that Title IX of the Education Amendments of 1972, which prohibits discrimination based on “sex,” requires schools to allow gender-dysphoric students to use opposite sex restrooms and locker rooms. Un-elected officials with no law-making authority in the ED simply decided that the word “sex” in the law no longer means just objective, immutable sex as manifest in biology and anatomy.  They decided that it also means one’s feelings about one’s sex.

When Title IX said “sex,” however, it actually meant “sex.” For the dull of thinking, Title IX included this:

A recipient [of federal funds] may provide separate toilet, locker room, and shower facilities on the basis of sex.

If this newest imperious imperial command prevails, all public schools will be required to allow gender-dysphoric students as well as “gender fluid,” “gender non-binary” and “questioning” students to use whichever restrooms and locker rooms correspond to the sex with which the gender genie leads them to “identify.”

Here are just some of the requirements included in this imperial command:

3.) “School staff and contractors” must no longer use pronouns in accordance with sex but rather in accordance with feelings about sex. So, I guess that means teachers will have to use the linguistic inventions by which “gender fluid,” “gender non-binary,” and “gender-questioning” students may want to be referred (e.g., “zie,” “zim,” “zir,” “zirs,” and “zirself”). Big government is restructuring grammar. Astonishing.

4.) Gender-dysphoric students must be permitted to use restrooms and locker rooms that correspond to the opposite sex. Schools “may make individual-user options available to all students who voluntarily seek additional privacy.” Two important things to note: First, schools “may“—not must—make such options available. Second, this means if girls are not comfortable with a boy in their locker rooms, it is the girls who would have to “voluntarily seek additional privacy.“

5.) Gender-dysphoric students must be permitted to take single-sex classes with opposite-sex students.

As I have written ad nauseum, this issue is not centrally about restrooms. It is centrally about the reality and meaning of sex differences, which the left seeks to eradicate. (Ironically, when homosexuals claim they are attracted only to persons of the same sex, they affirm and emphasize the reality of sexual differentiation. The left, however, is rarely constrained by foolish inconsistency.)

This, my friends, is something wicked.

Take ACTION:  Click HERE to send a message to your U.S. representative, urging him or her to rein in the unelected, leftist federal bureaucrats. Demand a stop to the federal takeover of bathrooms, locker rooms, overnight trips, etc.

You can also place a phone call to your federal lawmaker via the United States Capitol switchboard, by calling (202) 224-3121.