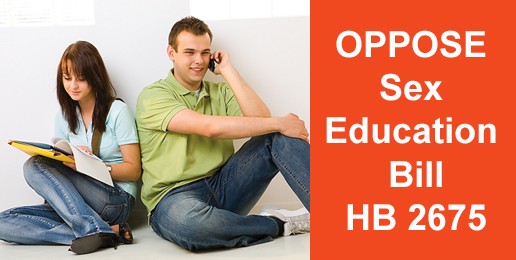 During the floor debate in the Illinois House of Representatives, supporters of the “comprehensive sex ed” bill (HB 2675), continually stated falsely that this bill mandates nothing. In fact it mandates the use of comprehensive sex ed curricula in any school district that chooses to teach about sexual health, which most districts do. It legally bans the use of what is called either abstinence education or “Sexual Risk Avoidance” (SRA) education.

The sponsors of this bill, both in the House and Senate, cited the problems of teen pregnancy and sexually transmitted disease rates as the reasons this bill is necessary. In order to justify robbing every school district in the state of the right to choose abstinence-based/SRA curricula, the bill’s supporters have an ethical obligation to provide conclusive proof that comprehensive sex ed curricula are consistently more effective at reducing teen pregnancy and STD rates.

What’s shocking is that during the House debates, no research was provided. State Representatives Robyn Gabel (D-Evanston) stated and Camille Lilly (D-Chicago) concurred that “numerous studies show that comprehensive sexual health education that stress abstinence as well as provides information on prevention results in positive health outcomes for teens and young adults,” but neither representative cited any study.

In addition, they didn’t claim that these numerous studies proved that comprehensive sex ed reduced the rates of teen pregnancy or STDs. Even more troubling, neither Gabel nor Lilly claimed that these numerous studies proved comprehensive sex ed is more effective than SRAs in reducing rates of teen pregnancy, STDs or even in “positively affecting health outcomes.”

Lilly claimed that a Center for Disease Control (CDC) study had concluded that “comprehensive sex ed is more effective than abstinence only,” but she did not identify that study. I could find only two CDC studies on this topic, one from 2009 and one from 2012, both of which concluded that there was insufficient data to make a determination about the efficacy of abstinence curricula. In addition, she didn’t explain what the alleged CDC study claims comprehensive sex ed is more effective at doing.

Supporters in the House repeatedly emphasized the requirement in this bill that information in sex ed must be medically accurate. That is a point with which no one disagrees. The concern of many is with the ambiguous terms “age-appropriate” and “complete.” Typical comprehensive sex ed curricula include information regarding sexuality that many parents and educators consider age-inappropriate.

Similarly, the term “complete” is woefully ambiguous. Who decides what constitutes a “complete” curriculum? We now have campus clubs at the University of Chicago and Harvard dedicated to sadomasochism. Does a “complete” curriculum address the importance of “safe” words for those teens who may engage in sadomasochistic sexual activities? After all, some teens are engaging in these kinds of activities, so shouldn’t we ensure their “safety”?

State Representative Scott Drury (D-Highwood) told me that he had not read a single abstinence-based curriculum and that no research-based evidence had been provided to lawmakers proving conclusively that comprehensive sex ed is consistently more effective than abstinence-based curricula. And yet he and other lawmakers had the audacity to vote to prohibit the use of a type of curriculum that they have no idea is less effective than comprehensive sex ed.

Last July the U.S. House of Representatives Committee on Energy and Commerce issued a report that stated that “Sexual Risk Avoidance (SRA), an abstinence-centered approach to sex education, is the best public health strategy to prevent unintended teen pregnancies and sexually-transmitted infections.”

Currently any school district in Illinois is free to use a comprehensive sex ed curriculum, and according to the Chicagoist, “60% of Illinois schools already teach contraception.” Why would supporters of this bill seek to mandate the use of the type of curriculum that most schools already use and seem to be failing? Perhaps comprehensive sex ed contributes to the problems of high teen pregnancy and STD rates.

How many of our lawmakers have read through a typical abstinence-based curriculum? How many have asked to see the research proving conclusively that comprehensive sex ed is consistently more effective at reducing teen pregnancy and STD rates? How many have spent any time looking at Illinois schools to see if there’s a correlation between the type of curriculum used and teen pregnancy and STD rates? How many have carefully examined the research that demonstrates the efficacy of abstinence-based curricula to see if there’s sufficient justification for continuing to allow communities the freedom to choose this type of sex ed?

The question before the Illinois Senate is whether comprehensive sex ed curricula has been proven to be consistently more effective than abstinence education at reducing teen pregnancy and STD rates. Absent the provision of conclusive research-based evidence proving that, it is utterly unjustifiable and irrational to rob school districts of their right to decide what type of sex ed curriculum best suits their needs and to prohibit by law the type of sex ed curriculum that a congressional committee recommends.

Take ACTION: Click HERE to send an email or a fax to your state senator today to ask him/her to vote NO to HB 2675.  You can also call the Capitol switchboard number at (217) 782-2000 and ask to be transferred to your state senator’s office or call IFI for their number.