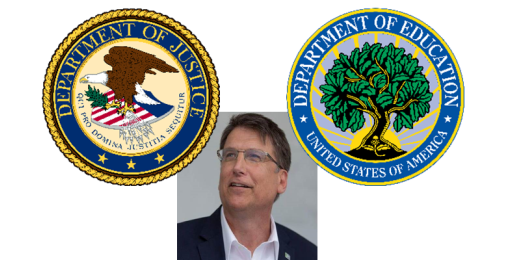 The federal government through its highly partisan Department of Justice (DOJ) is attempting to make law—again—by attacking North Carolina’s so-called “bathroom bill.” Last Wednesday, the DOJ sent a letter to NC governor Pat McCrory demanding that he rescind the law within three working days or face legal action and loss of federal funds.

The DOJ letter erroneously states that the NC law violates Title VII of the Civil Rights Act of 1964 which prohibits discrimination based on sex. In its infinite ignorance and hubris, the DOJ, has proclaimed that the word “sex” includes “gender identity.”

By attacking North Carolina’s law that requires restrooms in government buildings, state colleges and universities, and highway rest stops to correspond to sex and which does not apply to any private sector entity, the DOJ seeks to make law for the entire country.

This is the same stratagem the Department of Education (ED) is using to blackmail public schools into allowing gender-dysphoric students into opposite-sex restrooms and locker rooms. While the DOJ is using the Civil Rights Act of 1964, the ED is using Title IX of the Education Amendments of 1972. Both departments—neither of which have law-making authority—have unilaterally redefined the word “sex” in such a way as to make law.

If successful, the DOJ’s effort will be even more profound and destructive because of the scope of the applicability of the Civil Rights Act of 1964. Whereas Title IX applies only to schools, Title VII applies to every business in the private sector with over 14 employees; every government entity; and every religious organization, including private elementary, middle, and high schools, private colleges, and churches.

Don’t let deceivers distract you with mocking arguments about how few gender-dysphoric people will be using opposite-sex restrooms; or how few incidents there are of gender-dysphoric men assaulting women or are likely to assault women; or how few predators are pretending to be gender-dysphoric in order to access women’s restrooms, locker rooms, showers, dressing rooms, or shelters.

And certainly don’t be distracted by the stupid comparison of separate restrooms for blacks and whites to separate restrooms for men and women. While there are no substantive differences between blacks and whites, there are substantive differences between males and females,  which even gender-dysphoric persons and homosexuals acknowledge.

The central issue is with the meaning of physical embodiment as male and female.

Leftists dismissively claim that anatomical parts are irrelevant when it comes to “gender identity,” modesty, and privacy. They’re demanding that everyone in society treat gender-dysphoric persons in all contexts and ways (including grammatical ways) as if they are in reality the sex they wish they were. So, what are the logical out-workings of this pernicious ideology?

Ultimately, if this view prevails, society will be unable to maintain any separation between men and women—including between normal men and women—in any context. If sexual anatomy has no intrinsic meaning, if privacy and modesty have no connection to objective sex, if objective males must be allowed in women’s showers and restrooms, then there remains no rational justification for separate facilities for men and women or girls and boys.

Since, in the mixed-up, muddled-up, shook-up world of lunatic leftists, all that matters are feelings about one’s sex, there is no need for surgery, cross-sex hormones, or cross-dressing. So, that “transwoman” (i.e., an actual man) walking naked past your 14-year-old daughter in the health club locker room just might have a chest full of hair, a wooly beard, and a penis. Remember “gender identity” has no fixed meaning, and sexual anatomy is only important if people feel it’s important, so that “transwoman” in the locker room may even have a penis and furry breasts.

Take ACTION:  Click HERE to send a message to your U.S. representative, urging him or her to rein in the unelected, leftist federal bureaucrats in the Departments of Justice and Education. Demand that the federal government remove itself from issues of local control and stop misusing Title VII of the Civil Rights Act and Title IX of the Educational Amendments of 1972.